Victims of the weather: How climate change is creating more refugees than other conflicts

In 2020 in India, 3,856,000 people were displaced by environmental disasters, 989 times more than the 3,900 persons displaced by conflicts. Yet, there is no concrete framework to rehabilitate climate refugees 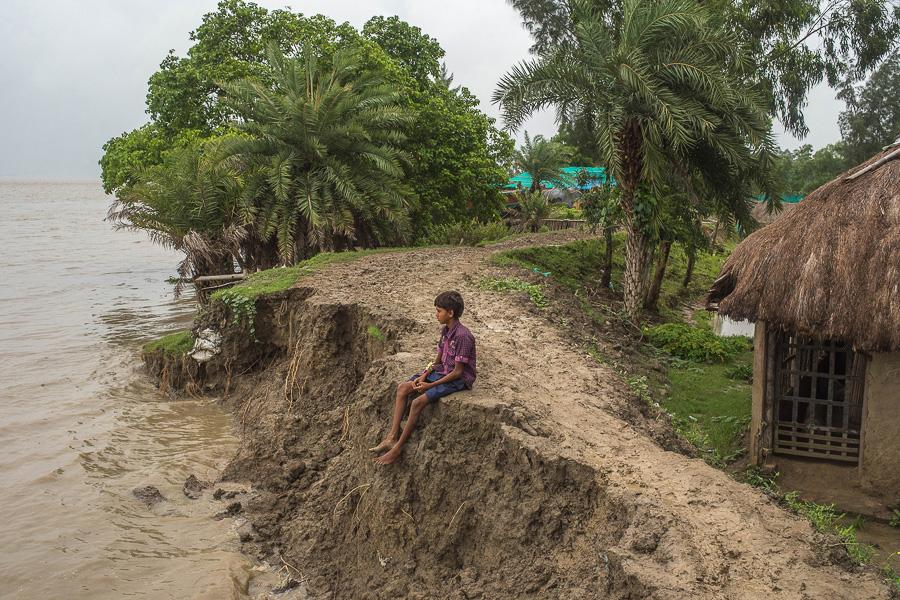 Low-lying islands like Ghoramara in the Sunderbans deltaic region are eroding even more rapidly than predicted due to continual rise in sea levels; Image: Sushavan Nandy/NurPhoto via Getty Images

In June 2021, a tiger jumped onto and killed Bhagabati Mondal, a woman who ventured to the edge of the Sunderbans National Park to catch wild mud crabs for a living. “A dangerous and illegal activity, but inevitable since crabs and mangrove forests on fragile islands like the coasts of the Ganga River delta have vanished, often along with the land itself,” says environmental activist Bonani Kakkar.

The Sunderbans, the only mangrove forests where tigers live, have been suffering from escalating natural disasters and land loss as climate change accelerates. People are being forcibly displaced through brutal loss of livelihood, and consequent crushing poverty. Still, like most other Governments across the world and even the United Nations, the Indian Government fails to recognise them as ‘climate refugees.’

Dr. Sugata Hazra, professor of oceanography, Jadavpur University says “Though research and media accounts have made the plight of the environmental migrants from the vanishing islands of the Sundarbans well-known in the last few decades, policy responses have been inadequate. There is no mechanism to recognise, record and register forced migrants, let alone a comprehensive plan to rehabilitate them.”

In 2020 in India, 3,856,000 people were displaced by environmental disasters, 989 times more than the 3,900 persons displaced by conflicts, according to data of the Internal Displacement Monitoring Centre (IDMC.)

UN reports document that India is the seventh most climate-change affected country, and major cities like Mumbai and Kolkata are at risk of drowning by 2050. Along with intensifying storms, floods are becoming common even in areas that never flooded before. Interestingly, flooding is historically a vital function in long cross-country rivers such as the Ganga and Brahmaputra. For centuries, they have flooded periodically, forming unique ecosystems and supporting their own unique biodiversity.

“Floods that seem devastating for us play a part in engineering the landscape. They maintain the grassland-woodland dynamics and maintain biodiversity of floodplains in Brahmaputra and Ganga rivers,” says ecologist Dr Qamar Qureshi, professor, Wildlife Institute of India.

The same floods needed to maintain biodiversity, when intensified through human interference and climate change, cause grave human suffering. Recently, the last two inhabited islands in the Sunderbans—Mousuni and Ghoramara—were evacuated. These islands have lost the ability to sustain human life, and most of their 34,000 evacuees left, hoping to make a new life in mainland India after their home was hit by four cyclones in just 24 months.

Despite their recognition of the causes and problems of climate change, the UN has never formulated concrete plans and protections for climate refugees.

Globally, while 7.8 million people are displaced today, and despite climate refugees being 3 times more than conflict refugees (documented by the IDMC since 2008), the Office of the United Nations High Commissioner for Human Rights (UNHCR) has never granted refugee status to even a single climate displaced person. Indeed, the post-World War II definition of ‘refugee’ (still in use) does not include the millions forced to migrate because of hurricanes, wildfires or rising sea levels. Although the UN Global Compact on Migration (2018) references devastating climate migration, it is non-binding and does not commit signatories to any supportive action. A much stronger international treaty is needed, to protect the lives and human rights of climate migrants as climate change unleashes greater disasters.

Closer to home, as the Maldives, Andaman and Nicobar, Sunderbans and other regional islands continue to lose land, India faces the prospect of a climate migration influx into its city and country borders—a plan for both internal and external climate refugees is the need of the hour.

Long-suffering climate refugees deserve serious attention to their plight through government policy and rehabilitation measures, and worldwide immigration policies with support frameworks of the United Nations. Governments and the United Nations must urgently create comprehensive plans to support climate refugees and resettle displaced people in safer areas of their own countries or across national borders less affected by climate change.

Dr. Sugata Hazra says, “The Indian Sundarbans is beautiful for its unique riverine landscape and mangrove forests but dangerous, with its Bengal Tigers, poisonous snakes, lurking crocodiles, roving cyclones, and the surging "Hungry Tide". Its islands are shrinking and sinking; the impacts of climate change and  accelerated sea level rise are challenging the very existence of its 5 million inhabitants.”

The mud crabs are becoming scarcer, vanishing with the habitats, biodiversity, wildlife and traditional human dwellers whose cycle of life they play a crucial role to maintain. The urgency is palpable.

5,438
Thank you for your comment, we value your opinion and the time you took to write to us!

Tweets by @forbesindia
Prev
Jeff Bezos steps down: From flipping burgers to taking the moon shot(s)
Next
Meet the unsung hero of the net-zero movement