Cyclones and the pressing concern for India's western coast

The regular occurrence of cyclones off the warm waters highlight the pressing concern for India's Western Coast as surface sea temperatures rise. The possibility of severe cyclonic damage to natural resources is just as grave as it is for man-made infrastructure 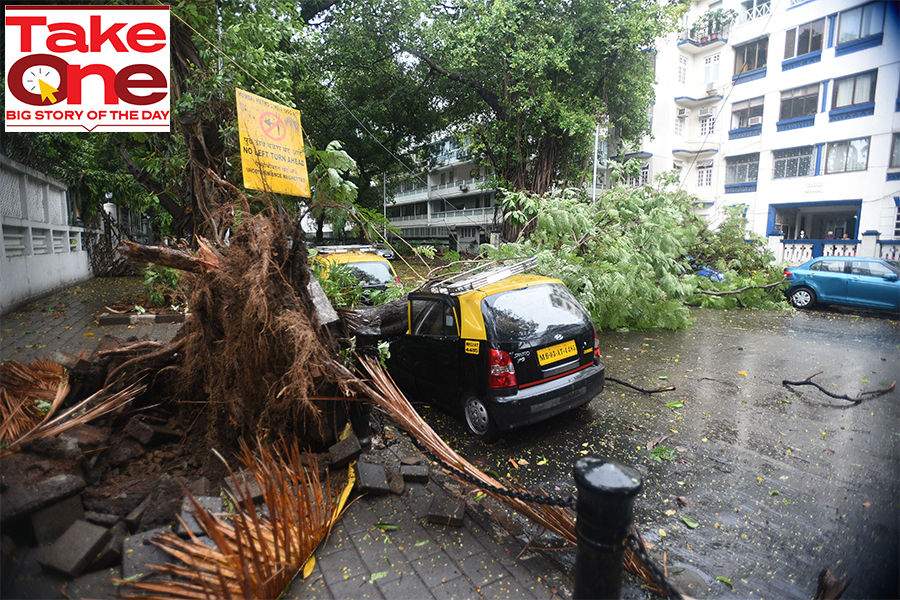 A view of a tree that fell on vehicles due to strong winds triggered by Cyclone Nisarga in Mumbai, India on June 03, 2020. A storm in the Arabian Sea off India's west coast intensified into a severe cyclone on Wednesday, gathering speed as it barreled toward India's financial capital of Mumbai. Nisarga was forecast to drop heavy rains and winds gusting up to 120 kilometers (75 miles) per hour when it makes landfall Wednesday afternoon as a category 4 cyclone near the coastal city of Alibagh, about 98 kilometers (60 miles) south of Mumbai, India's Meteorological Department said; Image: Imtiyaz Shaikh/Anadolu Agency via Getty Images

In Mumbai’s scorching summer heat in May, we watched a spiral of clouds take shape near the Lakshadweep Islands beyond India’s West Coast. We tracked it constantly in news updates as it formed an eye and intensified into Cyclone Tauktae, moved rapidly up from Kerala paralleling the Konkan Coast and narrowly missed Mumbai. A few hours of windy rain whistled in our windows and left a trail of more than 800 trees dying on the ground. Still gathering strength beyond 114 km/hour, Mumbai’s highest-ever experience of wind gust, it continued to intensify to 125 km/hour towards Gujarat: Lakhs of trees fell in the Gir National Park and 200,000 people were displaced. Over 39 bodies recovered off the sea near Mumbai were part of the reported 169 people who died in India.Last year, when Cyclone Nisarga was on track to hit Mumbai directly, we hoped it was a freak, and heaved a sigh of relief when it hit neighbouring Raigad where it uprooted thousands of trees, blew away roofs and destroyed fields. This time, we were less surprised. Just as it has tolerated so much else, Mumbai—which hadn’t faced a direct cyclone hit since 1891—is now coming to gradual terms with the possibility of severe cyclonic damage to its own man-made infrastructure.

Warming sea waters in the Arabian Sea around the 36 islands of the Lakshadweep are crucial to the complex conditions for a cyclone severe enough to threaten our Western Coast. “Our studies at Lakshadweep clearly point to elevated sea surface temperatures beyond 29 degrees Celsius, the tipping point beyond which corals bleach and die,” says marine biologist Dr Deepak Apte, who has researched Giant Clams and the ecology of the coral reefs and sands of the Lakshadweep Islands for nearly two decades.  On the other side of India, beyond our Eastern Coast in the Bay of Bengal, a new species discovery this May brings India’s mammal count up to 12. The new species, a shrew, was described and named Crocidura narcondamica in the volcanic Narcondam Island by scientists of the Zoological Society of India. Between 1963 and 1978, my father-in-law, ecologist Humayun Abdulali, visited the Andaman and Nicobar Islands and documented iconic species like the Narcondam Hornbill and Nicobar Pigeon. He described species like the Accipter virgatus abdulali (Nicobar besra sparrowhawk) and Dendrelaphis humayuni (Nicobarese bronzeback tree snake) which were named after him. In the four decades since then, new species are constantly being discovered in these pristine and isolated islands, home to 11,009 species on just 0.25 percent of Indian land which include 1.069 types of endemic fauna found nowhere else and which has never been fully documented. “We don't even have a full inventory of the species of flora and fauna found here; we won't even know what we will lose if these forests are destroyed,” says Pankaj Sekhsaria, a long-time researcher in the Andaman and Nicobar Islands. 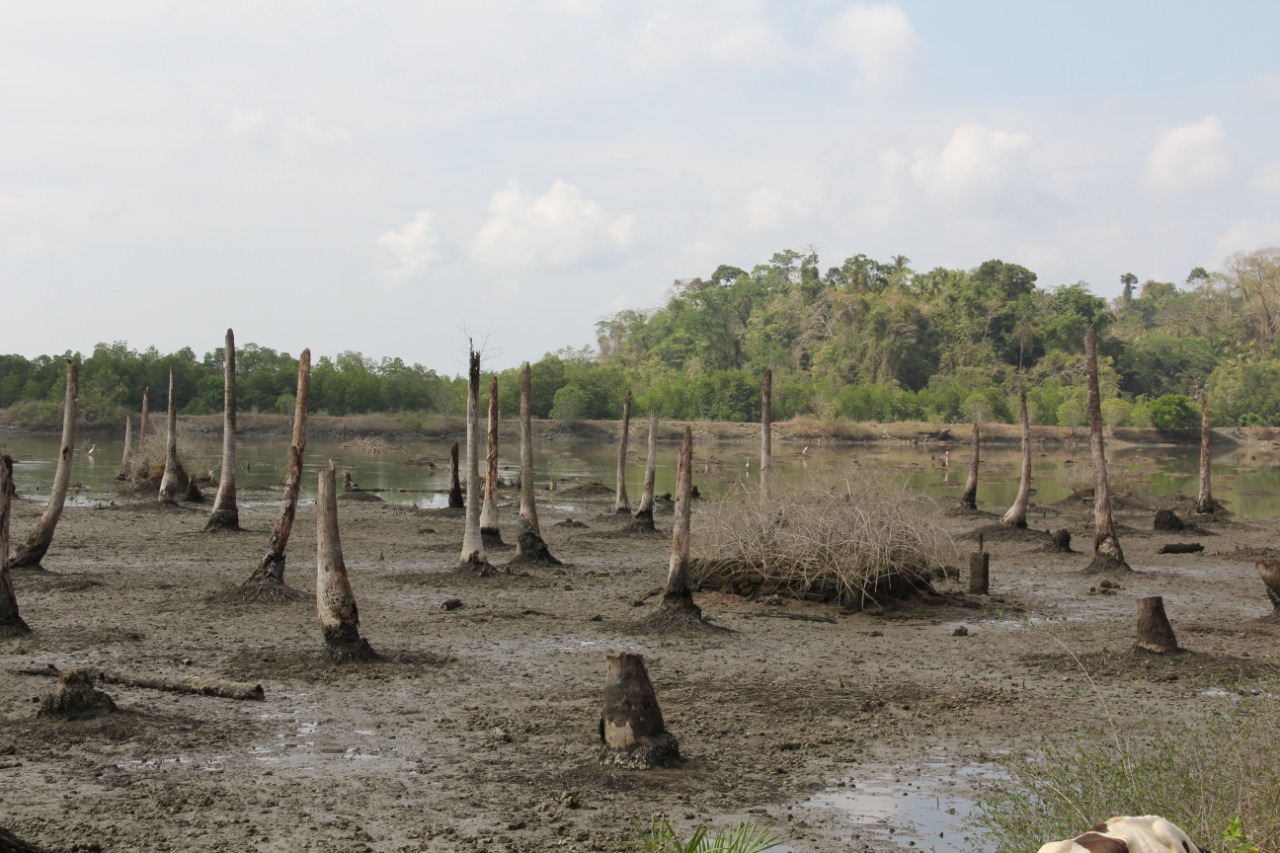 Effect of tsunami near Port Blair in Andaman IslandsA few weeks after Cyclone Tauktae on the West Coast, we saw graphic images of Cyclone Yaas devastate the states of Odhisa and Bengal in the East. Formed in the Bay of Bengal where the Andaman and Nicobar Islands are situated and where sea surface temperatures are already extremely warm, between 29 and 31 degrees Celsius, this is the area where 80 percent of the world-cyclone-related deaths have occurred. The regular occurrence of cyclones off these warm waters highlight the pressing concern for our Western Coast as surface sea temperatures rise beyond 29 degrees in the Arabian Sea, rivalling those of the Bay of Bengal.  Dr Sekhsaria says: “Niti Aayog-piloted mega projects in the Andaman and Nicobar Islands will be located in pristine, biodiverse forests and coastal systems.” The project referred to by Dr Sekhsaria is not the only one which threatens the fragile island ecosystems. Recently, after protests from local residents and environmental campaigners, Union Home Minister Amit Shah said that planned development projects in the Lakshadweep to make it a tourist destination on par with the Maldives would ensure people were consulted and taken into confidence.   Changes on the Lakshadweep, Andaman and Nicobar Islands will affect the thermodynamics, weather patterns and climate on both coasts of mainland India. Any development which does not factor effects on biodiversity, including forests, marine life and coral reefs, has the potential to not only threaten the islands themselves but also infrastructure and human lives far away from the tiny islands in whose vicinities cyclones originate. “The sea surface temperature of the Arabian Sea is rising steadily for the past few decades and fuelling frequent cyclones on the West Coast of India. All our infrastructure development on our West Coast needs to factor this worrying trend which may place infrastructure and assets at great risk in future. We need to closely monitor sea temperature rise in the Arabian Sea.” says Dr Apte.   In my mind, I see once again a coconut tree in Mumbai bend unnaturally to gusts from Cyclone Tauktae. The weak stem of a papaya lies broken on the ground, lacy leaves turned upwards, covering unripe fruit. I see far-away sand in remote Lakshadweep, glint white in sunlight under crystal water, coral waving underneath. My thoughts follow each other, inextricably linked. Earlier this year, UN Secretary-General Antonio Guterres said: “It’s time to re-evaluate and reset our relationship with Nature.” A chopped-up tree trunk lies piled on the edges of my Mumbai road. The bird with a nest there no longer sings outside my window. The writer is convenor, Awaaz Foundation