Covid-19 has presented us all with a once-in-a-century challenge. While we wait to see this through together, it is necessary to take immediate measures to ensure that our actions help us come out stronger and better

Gayathri Vasudevan is the Co-Founder & CEO of LabourNet. 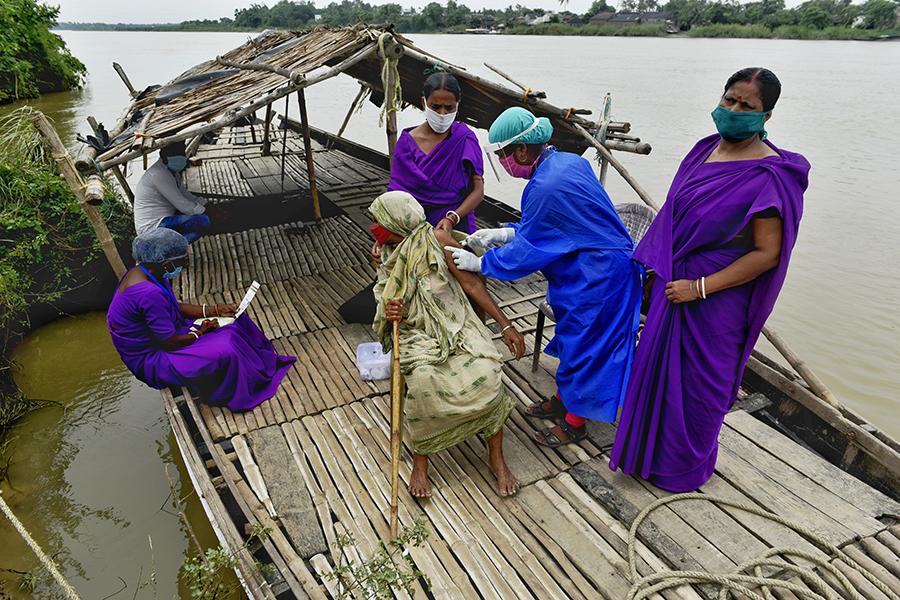 An old woman takes Covishield vaccination on a boat on the bank of the river Mundeshwari, Chitnan Village, West Bengal. India on June 29, 2021. Photo by Indranil Aditya/NurPhoto via Getty Images

The vaccination drive in India is a paradox. India is the first country to vaccinate 200 million citizens in record time with at least one dose. It is also the slowest to fully vaccinate its adult population with both doses. Despite this, India has covered just over three percent of its adult population. All major economies have covered half.

Ever since the vaccination programme began in India on January 16, 2021, the country has struggled to meet its immunisation targets.

The target was to initially vaccinate 300 million people in a "few months." That was before the raging second wave swept urban clusters and the hinterlands. The system was overwhelmed in no time.

Now, India has set itself a new target—to inoculate all Indians by December 2021. That translates to a requirement of over two billion doses by the year-end for the country's entire population or over 10 million doses a day for the next six months.

However, the country needs to meet several challenges to meet these stiff targets. The vaccine makers in the country are currently producing about 2-2.5 million vaccines daily. Even as there are new companies in the fray to augment this capacity, the country is also woefully short of infrastructure like cold chain and transport facilities. It might help if these problems are parallelly addressed so that there is no delay or vaccine wastage, if and when the humungous quantity required becomes available.

It is also hard to overlook the bursting-at-the-seams healthcare infrastructure where doctors and nurses are pulled out of regular duty and pushed into the vaccinator's role. That is despite the government, in December last, recognising the entire ecosystem, as eligible vaccinators. These include pharmacists, auxiliary and general nurse midwives, MBBS and BDS interns, among other key healthcare personnel as eligible vaccinator officers.

This is where the main challenge lies. This is also where India could miss the "Unprecedented times call for unprecedented measures" bus. The country would do better by training and quickly deploying Auxiliary Nurse and Midwife and General Nursing and Midwifery, using interns to do the job. It could also leverage the ready infrastructure at about eight million universal immunization programme sites across the country. These are also places where people have more ready access than large hospitals.

Leveraging these centres and human resources will also mean that people, mainly in rural areas, do not have to cover long distances to get a jab. Statistics show that an average primary healthcare centre in most places in India is at an average 9 kms distance. This can be alleviated if existing and proximate resources are activated at scale.

The country is yet to put to use innumerable dispensaries and over half-a-million pharmacies to do the job and free up doctors and nurses to attend to the sick. Canada, for instance, has a programme where people can walk into a pharmacy and get a jab—all of it on record and tracked. It is possible to replicate a similar model in India with a couple of months of training.

Nations are made or broken in crisis. This could be India's opportunity to reorient its policies towards the welfare of her people. The first step was taken when the government made record provisions in its federal budget for healthcare after decades of demand to do so by healthcare workers and activists. In 2021-22, the central government will be spending Rs 2.23 trillion on meeting the healthcare needs of its citizens. This, however, is a long belated first step and will take years to fully catch up with what is desirable. The second wave should drive policy-makers to prioritize capacity building.

Covid-19 has presented us all with a once-in-a-century challenge. While we wait to see this out together, it is necessary to take immediate measures to ensure that our actions help us come out stronger and better.

The writer is a co-founder & CEO of LabourNet

2,503
Thank you for your comment, we value your opinion and the time you took to write to us!

Tweets by @forbesindia
Prev
Opinion: Time to hit reset on the Indian skilling ecosystem
Next
International day of the girl child: What we must remember as we reopen schools