Achieving an ambitious vaccination target requires ramping up manufacturing, enabling universal access to vaccines across geographies, tenacious micro-planning, and transparency in vaccine use and supply data, all of which is still a work in progress in India 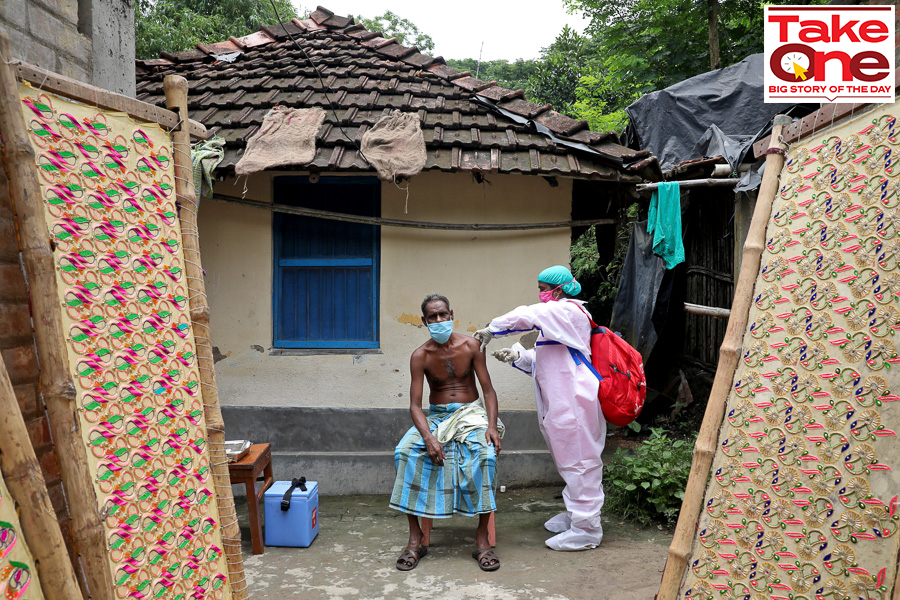 Rafiq Khan, a villager, receives a dose of Covishield vaccine during a door-to-door vaccination and testing drive at Uttar Batora Island in Howrah district in West Bengal, India, June 21, 2021.
Image: Rupak De Chowdhuri / ReutersIt’s been half a year since India rolled out the world’s largest vaccination programme.
Needless to say, so far, it hasn’t been entirely without hiccups. Much of that, of course, is because the Indian government is attempting a Herculean task, one where it wants to inoculate nearly 94 crore above the age of 18 in the span of a year. That number is a tad bit more than the combined population of the European Union and the US.
Since India’s vaccine rollout began on January 16, 41.8 crore people have been given the jab, with 8.6 crore people being fully vaccinated with both doses. That’s about 9 percent of the target population of 94 crore people. About 33 crore people have received their first dose, accounting for 42 percent of the target population. In comparison, in Canada, Spain, UAE, and the UK, among others, over 50 percent of the population has received both their doses. Across countries such as the US, Germany and France, the fully vaccinated population accounts for over 40 percent of the population.
In all, the Indian government intends to use about 188 crore doses of vaccine between January and December this year, to inoculate the population, even as the pace of vaccination has remained haphazard. On July 22, the country vaccinated over 52 lakh people. Just a day before, that number stood at less than half at 22.7 lakh. And, the day before that, the number stood at 35 crore. Much of the inconsistency continues to be blamed on the shortage of vaccines reported across the country.
On July 22, for instance, the Delhi government announced that the Covishield vaccine, which accounts for 88 percent of all the vaccinations in India, will be reserved only for the second dose of the vaccine, until July 31. In Maharashtra, vaccination was stopped in Mumbai on July 22 due to a lack of vaccines.
“By mid-July or August, we will have enough doses to vaccinate 1 crore people per day. We are confident of vaccinating the whole population by December,” Balram Bhargava, India’s secretary for the Department of Health Research and the director-general of the Indian Council of Medical Research had said on June 1.
Yet, halfway into July 2021, the numbers seem to be missing their targets. India’s daily Covid-19 vaccination count reached an all-time high of over 80 lakh doses on June 21, the day the country kicked off its new vaccination policy where the Centre provided vaccination free of cost to all states. The rate of daily vaccinations, however, has been declining since.
The government plans to vaccinate 13.5 crore people in July, as compared to 11.46 crore vaccinations that it had administered in June. To administer 13.5 crore doses in July, the vaccination rate should rise to over 44 lakh doses per day, but so far, since the beginning of the month, the country has managed to inoculate 8.46 crore people, averaging about 38 lakh doses a day, a shortfall of 6 lakh doses a day.
“The high point [of vaccination] on June 21 showed that if vaccine doses were available, India has the capacity to administer upwards of 8 million [80 lakh] doses. So it is clear enough that enough supplies are not coming through,” says Shahid Jameel, director, Trivedi School of Biosciences, Ashoka University. Jameel was also the former chair of the scientific advisory group of the forum known as INSACOG, a multi-laboratory, multi-agency, pan-India network to monitor genomic variations in the SARS-CoV-2 virus.
So, What Do Vaccine Manufacturers Say?
India’s Covid-19 vaccination programme has relied on just two vaccines so far, Covishield, the AstraZeneca vaccine, and Covaxin, manufactured by Hyderabad-based Bharat Biotech.
Covishield currently accounts for 88 percent of the doses given in India today, while Covaxin accounts for 12 percent of the vaccines. India, of course, had expected more vaccine makers to join the vaccination plan, and take some of the load off the two vaccine makers. “Seven companies are producing different vaccines and another three vaccines are in the advanced stage of clinical trials,” Prime Minister Narendra Modi had said in June. “Procurement of vaccines from other countries has also picked up pace.”
Yet, the reality continues to be different. According to the Serum Institute of India, the company is currently manufacturing 11-12 crore doses of Covishield a month. While India continues to be a beneficiary of that, the company also has commitments to deliver the vaccine for global markets, particularly to Gavi, the global vaccine alliance. The company is now planning to launch Covavax, a vaccine manufactured by Novavax with an efficacy of over 90 percent in September, while it is also readying test batch production of Sputnik V by September this year.
Sputnik V, which has an efficacy of 91.6 percent, is expected to see over 100 crore doses being manufactured in India, after the Russian Direct Investment Fund (RDIF), the Russian government’s sovereign wealth fund, tied up with some seven manufacturers to manufacture the vaccine in India. While the vaccine had received necessary approvals in April, it is yet to be used significantly in India’s inoculation drive.
Dr Reddy’s Laboratories (DRL), which has an exclusive agreement to import and sell the first 25 crore doses in India, had received about 30 lakh doses by June 1 and about 360,000 shots by early this month. Of those doses, as per a response to a question in the Rajya Sabha, Union Minister of State for Health Dr Bharati Pravin Pawar, said that only close to 2.61 lakh doses had been administered as of July 16.
Speculation was rife that the Sputnik V vaccine’s rollout was being delayed particularly since the first and second doses of the vaccines were not being made available in equal doses from the manufacturer. “We would like to reiterate our commitment that all hospitals that received dose 1 from us will also receive dose 2 in equal quantity on time,” a spokesperson for DRL told Forbes India. “Neither the ongoing soft commercial launch nor work towards its ramp-up in India have been put on hold.” 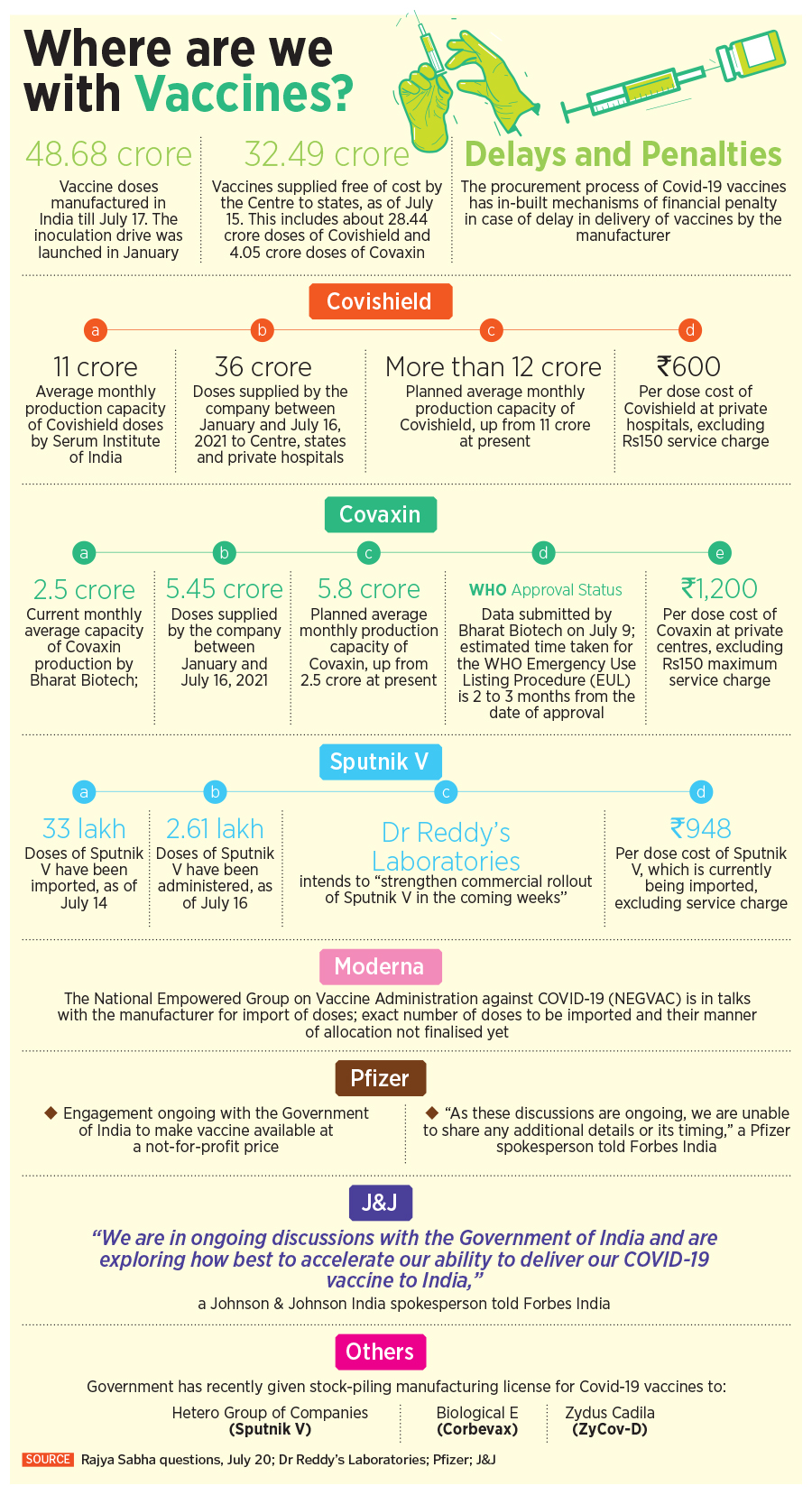 Jameel points out that the R0 [R-naught] for Covid-19 in India has increased over the past few weeks, but is still below the value of 1.0. According to the Harvard Global Health Institute, the R-naught represents, on average, the number of people that a single infected person can be expected to transmit the disease to, or the average “spreadability” of an infectious disease.
“If it climbs above that [1.0], we will have a growing outbreak,” he says. According to Jameel, while new Covid-19 cases are important, more important is a focus on moderate and severe cases that require hospitalisation. “We are unlikely to see the kind of surge we saw in March to May, because of many more exposed (and thus protected) people, and the fact that we have already been exposed to the highly infectious Delta variant,” he explains. “Still, it would be prudent to have sufficient hospital capacity, oxygen, and medicines on standby.”
Dilip Jose, MD, and CEO, Manipal Health Enterprises, agrees that an adequate stock of medicines and medical oxygen at the district level should be a key priority based on learnings from the past, apart from a seamless process of testing and tracing to manage local spikes. “The third step needs to be an appropriate triaging mechanism that restricts hospitalisation to only those who genuinely require it,” he says, adding that infrastructure ramp-up to ensure oxygen beds and ICUs must happen now when India is between waves. “Finally, it should also be ensured that the inoculation drive does not suffer, as the only way out of this pandemic is to reach our vaccination goals as soon as possible.”
Just meeting the vaccination numbers, however, is not sufficient, says Dr Babu. He points out that right now, the areas with high vaccination coverage are largely in and around metros where people are aware. The first priority, therefore, must be to make vaccines universally accessible across rural and remote areas, he says.
“Second is micro-planning, which the Centre must insist that states undertake. How many people are there, how many vaccines are needed for that area, where the vaccination centres have to be, those details have to be strengthened now,” he says. The third crucial part, according to him, is to mobilise people, which means ensuring that people come in to get their vaccines, and even if they do miss inoculation due to unavailability of vaccines or other reasons, there must be strategies to get them to the vaccination sites again when doses are available. “This is the only way forward, and has to be expressed clearly even in review mechanisms.”
Jose agrees that a uniform and rapid coverage across all geographies is what would shield the country from repeated waves of cases as well as the possibility of more mutants. “With more vaccines in the pipeline, availability concerns would soon be over. In the meanwhile, the focus needs to be on overcoming hesitancy, besides ramping up on logistics of delivering the dose on the arm in rural areas,” he says. “It is the collective responsibility of the entire health care sector—both public and private—to get us there,” he says.
According to Jameel, states should plan based on vaccine delivery capacity and convey to the Centre ahead of time, while the Centre should make doses available based on that capacity. “Both should make all the use and supply data completely transparent. The same goes for pandemic management,” he says. “Transparency builds trust in the system and compels people to follow rules. That element appears to be missing.”

Tweets by @forbesindia
The 1964 games proclaimed a new Japan. There's less to cheer this time
How much do Instagram influencers really make?