As Bharat Biotech's Covaxin shows an interim efficacy of 81 percent, Forbes India traces the career of the founder, whose entrepreneurial journey has seen a successful track record of developing vaccines in India for the world 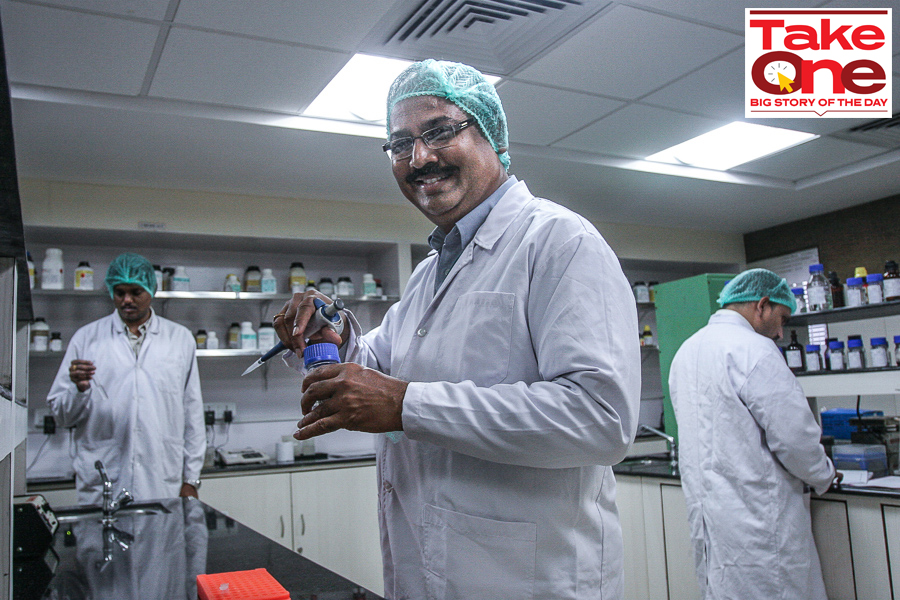 For a few months recently, Krishna Ella had been in the eye of a storm. It all started in early January, when India gave restricted emergency approval for his company’s indigenously developed Covid-19 vaccine, Covaxin, as part of the countrywide vaccine rollout plan. At that time, Covaxin was still in the midst of its phase 3 trials involving over 26,000 people, and no data regarding its efficacy had been published. Covaxin, manufactured by Ella’s 25-year-old company, Bharat Biotech, was developed using a whole-virion inactivated vero cell, according to the company. That means, the vaccine was made of killed coronaviruses, which when administered, allowed immune cells to recognise the dead virus, prompting the immune response against the virus.

While the phase 1 and phase 2 clinical trials conducted in 755 participants demonstrated a high safety profile of the vaccine with seroconversion rates of 98.3 percent and 81.1 percent on day 56 and 104, respectively, questions still loomed over the efficacy of the vaccine in controlling the spread of the virus. The concerns were further accentuated when Adar Poonawalla, whose company, Serum Institute of India (SII), the world’s largest manufacturer of vaccines and the maker of the Covishield vaccine—the Indian version of the popular Oxford-AstraZeneca vaccine—claimed that only three vaccines in the world had passed all the scientific evaluations with others only “safe like water”. Poonawalla’s statement came immediately after the government approved Covishield and Covaxin for emergency use. That remark had irked Ella, who called a press conference to refute the allegations and said the company always conducted “200 percent honest clinical trials” and was yet receiving backlash. “Some companies have branded me (our vaccine) like ‘water’. I want to deny that. We are scientists,” Ella, chairman and managing director, had said then. While Ella and Poonawalla ironed out their differences later and issued a joint statement, Covaxin’s future was in doubt after the company sought beneficiaries of the vaccine to sign a consent form, and said the company would pay a compensation if they suffer a serious adverse reaction to the vaccine. As a result, in the early days of the vaccination programme starting January 16, Covaxin found it difficult to find takers as India rolled out the world’s largest vaccination drive. In the state of Karnataka, for instance, only about 2.3 percent of the doses supplied were reportedly used, with the remaining vials lying in storage. "Remembering people criticising us, saying our data is not transparent, not in the public domain, I am today proud to say that our data are in the public domain in six publications,” Ella said in a video message posted on March 3. “If people have got patience, they should read those articles." Ella’s message came on the backdrop of the company announcing its interim analysis of the phase 3 trials, which showed the vaccine had an 81 percent efficacy against the virus. “Today is an important milestone in vaccine discovery, for science and our fight against the coronavirus,” Ella said. “With today’s results from our phase 3 clinical trials, we have now reported data on our Covid-19 vaccine from phase 1, 2, and 3 trials involving around 27,000 participants. Covaxin demonstrates high clinical efficacy trend against Covid-19 but also significant immunogenicity against the rapidly emerging variants.” On March 1, the vaccine received a much-needed boost after Prime Minister Narendra Modi took Covaxin as India embarked on its second phase of vaccination. “It remains a puzzle why India's regulatory authority permitted the widespread use of this vaccine without these preliminary data about protection,” says Satyajit Rath, scientist at the National Institute of Immunology and the adjunct professor at the Indian Institute of Science Education and Research. “That decision meant that it was or is being used in 'clinical trial' mode, which means that people being given it have to sign a consent from, making them volunteers. Yet, if they did not want to sign, they were being denied alternative vaccination, making the process uncomfortably coercive. The decision did not seem to add big numbers to the vaccination campaign either; only about 10 percent of the total vaccinations so far have been reported to be with Covaxin. So, all this apparently premature aggressive 'vaccine nationalism' seemed to do was to add to the already existing vaccine anxieties.” In his previous interaction with Forbes India, Ella had spoken about his track record as a vaccine maker as an attestation to his credibility, "Bharat Biotech was the first company to identify, purify and sequence Chikungunya during the 2006 epidemic in Kerala and Tamil Nadu. We were also the foremost company in the world to predict, work and file the patent on the Zika vaccine before the US and WHO [World Health Organization]​ recognised the problem," he had said, adding that ninety percent of Bharat Biotech's vaccines are sold in "lower-middle-income countries" with affordable pricing. "We fervently work towards successful development of efficacious vaccines for neglected diseases." ... With Covaxin showing 81 percent efficacy, it seems like Ella can finally heave a sigh of relief.  While clinical trial experts and immunologists call the latest results encouraging and positive, all eyes are on Ella yet again, as he and Bharat Biotech now conduct an additional interim analysis for 87 cases and a final analysis for 130 cases in order to put out the final data to be peer-reviewed and published.

The Frontrunner
With the interim data now in public, Covaxin has also leapt past Covishield in terms of its vaccine efficacy. Covishield, currently has an efficacy of 63.09 percent against symptomatic Sars-CoV-2 infection, according to the WHO. India is still awaiting data from Hyderabad-based Dr Reddy’s on the phase 3 trials using the Russian-made Sputnik V vaccine, before a decision is taken on allowing the vaccine for countrywide use. Sputnik V has an efficacy of 91.6 percent. Covaxin’s third phase trials, which began in November last year, had enrolled 25,800 participants aged between 18 and 98, including 2,433 over the age of 60 and 4,500 with comorbidities. “The primary endpoint of phase 3 clinical trial is based on the first occurrence of PCR-confirmed symptomatic (mild, moderate or severe) Covid-19 with onset at least 14 days after the second study vaccination in serologically negative (to Sars-CoV-2) adult participants at baseline,” the company said in a statement. The interim analysis included a preliminary review of the safety database, which showed that severe, serious and medically attended adverse events occurred at low levels and were balanced between the vaccine and placebo groups. The trial's conduct and monitoring were as per global guidelines and were outsourced to New-York based clinical research firm IQVIA. “The significance of Covaxin’s efficacy data is that the vaccine now has some evidence about protection; this was lacking so far,” says Rath. “It was expected, of course, that the vaccine would work, since it had been shown to generate good antibody responses, and since a similar vaccine of Chinese origin had already been shown to work in preliminary evidence. But it is reassuring to hear that there is now some actual protection-related evidence for Covaxin itself.” That would likely put concerns about the vaccine at bay for now. “The numbers reported seem quite small as yet, but some other vaccines have been authorised with similarly small numbers,” adds Rath. “We should keep in mind that all such data, for every Covid-19 vaccine authorised so far the world over, are quite preliminary evidence from ongoing clinical trials. So the actual exact number is not particularly significant at this point of time; all we can take away from such preliminary evidence is that the vaccine likely provides a reasonable degree of protection. There is no reliable way of predicting what the final number at the end of the clinical trial would be either.” Anant Bhan, a global health, bioethics and health policy researcher, agrees with Rath. According to him, it is important for the company and the regulator to keep up with the trials to determine long-term efficacy. “On the face of it, these results are fairly good compared to most other vaccines. The interim efficacy data is not yet independently verified, and is coming from announcements made by the sponsors and co-sponsor of the vaccine. But this has been the case through the pandemic by other companies as well,” he explains. “Hopefully, it [Bharat Bitoech] will put out the [final] data soon to be peer-reviewed and published.” Rath explains that while Bharat Biotech will have to wait for a formal peer review before it can be widely accepted across the world, “reviewing and publishing these preliminary data from ongoing phase 3 clinical trials may have its own difficulties”. “However, again, this has not necessarily been done for the other Covid-19 vaccines developed, especially since reviewing and publishing these preliminary data from ongoing phase 3 clinical trials may have their own difficulties,” Rath says. For now, it’s been a long journey from Thiruthani to Hyderabad. And Ella’s journey is only starting all over again.

Tweets by @forbesindia
Shiv Shivakumar: How to deal with the ten most important career dilemmas
EXPLAINER: What is vaccine efficacy and what does it mean?