For both Japan and the Olympic movement, the delayed 2020 Games may represent less a moment of hope for the future than the distinct possibility of decline 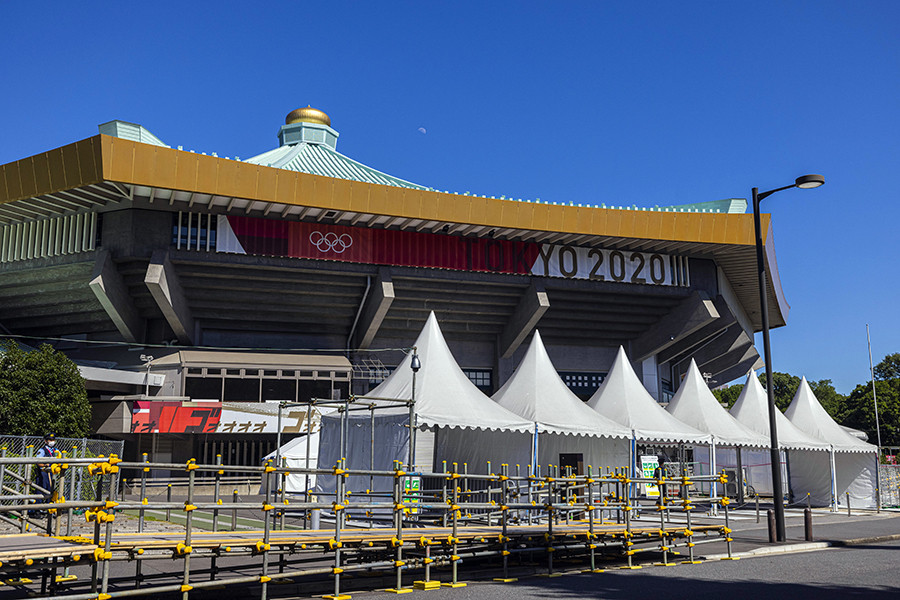 The exterior of Nippon Budokan in Tokyo’s Chiyoda ward on July 18, 2021. The country has changed vastly from that hopeful moment when the 1964 Summer Games proclaimed a new Japan, and the Olympics this time around have come to represent something different and not entirely positive; Image: Hiroko Masuike/The New York Times

TOKYO — Under crisp blue skies in October 1964, Emperor Hirohito of Japan stood before a reborn nation to declare the opening of the Tokyo Olympic Games. A voice that the Japanese public had first heard announcing the country’s surrender in World War II now echoed across a packed stadium alive with anticipation.
On Friday, Tokyo will inaugurate another Summer Olympics, after a year’s delay because of the coronavirus pandemic. Hirohito’s grandson, Emperor Naruhito, will be in the stands for the opening ceremony, which will otherwise be closed to spectators as an anxious nation grapples with yet another wave of infections.
For both Japan and the Olympic movement, the delayed 2020 Games may represent less a moment of hope for the future than the distinct possibility of decline. And to the generation of Japanese who look back fondly on the 1964 Games, the prospect of a diminished, largely unwelcome Olympics is a grave disappointment.
“Everyone in Japan was burning with excitement about the Games,” said Kazuo Inoue, 69, who vividly recalls being glued to the new color television in his family’s home in Tokyo in 1964. “That is missing, so that is a little sad.”
Yet the ennui is not just a matter of pandemic chaos and the numerous scandals in the prelude to the Games. The nation today and what the Olympics represent for it are vastly different from what they were 57 years ago.
The 1964 Olympics showed the world that Japan had recovered from the devastation of the war and rebuilt itself as a modern, peaceful democracy after an era of military aggression. Highways and the bullet train were rushed to completion. With incomes rising, many Japanese families like Inoue’s bought televisions to watch the Games, the first to be broadcast live by satellite around the globe.
This time around, Japan is a mature, affluent nation. But its economy has been stagnant for much of the past three decades, leaving growing numbers of people behind; 1 in 7 children live in poverty, and many workers are in contract or part-time jobs that lack stability and pay few benefits.
It is a much older nation now, too. When Hirohito opened the Summer Games, just 6% of the population was 65 or older. Today, the figure is more than 28%, and the fertility rate is almost half that of 1964. The population has been shrinking since 2008.
The 1964 Tokyo Olympics are often regarded as the point when Japan pivoted into prosperity. Within four years, Japan became the world’s second-largest economy, behind the United States, its former occupier. (It has since fallen to third, behind China.) As many Japanese entered the middle class, they bought not just televisions, but other modern appliances like washing machines, refrigerators and vacuum cleaners.
Japan is again approaching a turning point, one whose outcome depends on how the government, corporations and civil society respond to a shrinking and aging population.
Back in 1964, there was “a sense of Japan in motion and a sense of a country with a future,” said Hiromu Nagahara, an associate professor of history at Massachusetts Institute of Technology. Now it’s “a country that has lost confidence and a country whose political elites feel very intensely that loss of confidence.”
Longtime observers of Japan say it should revise some sclerotic practices and cultural norms. While the country’s rise as an industrial powerhouse was built on strong social cohesion, that aspect of society has tended to repress women, ethnic minorities and other groups that do not conform to traditional expectations.
“Japan’s strengths are clear; it’s the social fabric,” said Carol Gluck, a historian of modern Japan at Columbia University. “But that can become a weakness if it makes it hard to effect change.
“There’s a lot of potential there,” Gluck added. “But the question is, will it be grasped and realized before things get so bad?”
With the international spotlight on Japan for the Olympics, many of its societal warts have been exposed.
In February, the president of the Tokyo organizing committee, Yoshiro Mori, 84, was forced to resign after saying that women talked too much in meetings, though not before he received a staunch defense from traditionalists. In a country that ranks 120th out of 156 nations in a gender gap ranking, many Japanese women recognized his comments as reflecting all-too-familiar attitudes.
Despite pressure from activists to seize the Olympic moment to advance gay and transgender rights in Japan, a modest bill labeling discrimination “unacceptable” failed to even get a hearing in the conservative Parliament. And this week, a composer for the opening ceremony resigned after it emerged that he had confessed to severely bullying disabled classmates in school. The Japanese Education Ministry calls bullying one of the biggest social challenges in classrooms.
When Tokyo bid for the 2020 Games, the prime minister at the time, Shinzo Abe, framed it as a symbol of triumph over a devastating earthquake, tsunami and nuclear disaster in 2011. That message has been overtaken by a new narrative: that the Games represent a global effort to overcome the pandemic.
The Japanese people, who mostly oppose holding the Games, are not buying either message. The nuclear cleanup is far from complete, and the Games are being held amid a state of emergency as coronavirus cases have reached a six-month high in Tokyo. Those increases have been compounded by daily announcements of positive cases in the Olympic Village, reminding everyone of the enduring power of the virus.
And with spectators barred from all but a few events, there is little upside for hotels, restaurants, retailers and other businesses.
“I feel sorry for the tourism business or hotels,” said Ikuzo Tamura, 84, who sold commemorative cloth wraps in the Olympic Stadium in 1964. “They don’t have the same opportunity as we did. I don’t think someone should be blamed, but in this situation, people have no choice but to endure.”

At this point, Japan’s best hope may be to showcase its crisis management skills by pulling off the events without any large-scale outbreaks.
“Whether you agree or not with the Japanese government, these Games are going ahead with a very high degree of risk,” said Roy Tomizawa, author of “1964: The Greatest Year in the History of Japan.”
“It’s like Simone Biles attempting a double pike, a move that no other woman will do except for Simone Biles,” he added. “I don’t know how many countries would have gone ahead with this.”
Historians point out that the 1964 Games did not go as well as gauzy-eyed citizens might recall. Two top officials resigned amid public criticism of Japan’s decision to send a team to the 1962 Asian Games, whose host country, Indonesia, excluded athletes from Israel and Taiwan, said Yuji Ishizaka, a sports sociologist at Nara Women’s University. And up to a year before the 1964 Olympics, only about half of the public supported hosting the Games.
Still, the hope of any Olympics is that once the Games start, the athletic competition comes to the fore. What people remember best from 1964 is the victory of the Japanese women’s volleyball team, a group of factory workers who snatched the gold medal from the Russians; or the men’s gymnastics team, which won a group gold medal, becoming heroes.
This year, even without live audiences, the drama will still be present and televised. But it will be tempered.
“For athletes, for me, having spectators gives you so much power,” said Shuji Tsurumi, 83, a gymnast on the 1964 team who also won three individual silver medals.
“You have to feel the athlete’s breath on your skin, the air in the stadium, the tension of the others around you waiting for a successful landing” he added. “Without that, it’s not the same.”
Yoshiko Kanda, a member of the victorious volleyball team in 1964, said that the crowd’s cheers were “the biggest reminder of why I was competing.”
“Without this feeling in the air, I bet many athletes are struggling,” said Kanda, 79, who competed under her unmarried name, Matsumura. “In 1964, the environment, the air, the feeling in society was burning with excitement,” she added. “Compared to the ’64 Olympics, it will be so lonely.”

Tweets by @forbesindia
Xiaomi's road to Internet-of-Things dominance
India has been promising a lot of Covid-19 vaccines. Where on Earth are they?