Ponds play a crucial role in improvement and sustenance of community, and there is an urgent need to reignite the interdependent relationship between people and ponds 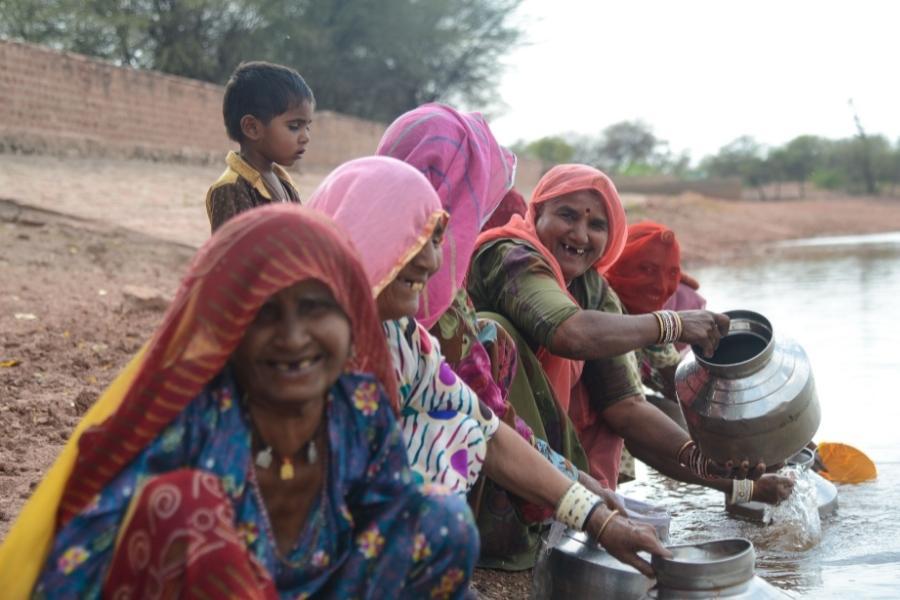 Women celebrate as water is now closer to their homes

Marwar Mundwa in Nagaur, Rajasthan, is an ancient village dating back to 1123 as per the Hindu calendar. At its heart, lies the historic Lakholav Pond on whose banks stand over 30 temples and sprawling gardens, a reflection of the reverence once given to ‘ponds’ and ‘water’ in ancient times.

Thousands of years later, however, in the early 2000s, Marwar Mundwa’s water provision was reduced to a sad government pipeline, which supplied water for a mere 30 minutes per day, along with fluoride ridden groundwater, making it unfit for human consumption. Lakholav Pond, which once met the annual drinking water needs of the entire community, lay in a state of disrepair that would break the hearts of the community’s forefathers. Rubbish lined its banks, silt so dense that water was just ankle-deep, with a greenish-brown hue, which even turned animals away.

The need of the hour…

Lakholav is representative of thousands of ancient ponds across India that have been neglected and now lie defunct—a slap in the face, given India’s current water crisis. There is an urgent need for people in rural communities to change how they view, and subsequently treat, community ponds. From being seen as a community dumping ground, to being viewed and valued as an abundant community resource, we must reignite the interdependent relationship between people and ponds.

In its optimum state, a pond is a giver of water, livelihood, and life. It contributes to local groundwater recharge, and when in a state of abundance, it becomes the lifeblood of the community—a place for gathering, worshipping, and protecting. Community elders, many of whose ancestors built these traditional water harvesting structures, know the value a good pond can bring and find great pain in seeing the current state of affairs. Younger generations—used to seeing water piped in from government pipelines—often see no value in these dirty dumping grounds, which silt up and fall into disrepair.

India is endowed with diverse and distinctive traditional water bodies of which a pond is just one. They support its large population and complex biodiversity but are under continuous stress and threat, caused primarily by the people they are there to serve. As a result, there has been a stark decline in both the quality and quantity of pond water, thanks to improper monitoring of these water bodies.

Historically, people in rural India have had a deep connection with their water bodies. A common property of the community, a pond can be used for a multitude of purposes, including irrigation, bathing, washing, domestic use, and for cattle. Ponds are also a habitat for flora and fauna and a source for recharging the groundwater. They mitigate droughts and act as shock absorbers in flood-prone areas.

But in so many rural communities today, the pond has fallen by the wayside. It is undervalued and even disrespected. Pollution is a key factor, with solid waste discarded by local villagers and even industrial effluent diminishing the ‘gifts’ a pond can bring its community.

Pond catchment and storage areas have been encroached upon, reducing the water availability and quality. Many ponds have simply disappeared, filled in and built on top of. With the country in the throes of a water crisis, it is criminal to think that these once-beloved ponds have been tossed aside.

And industry is also to blame. Industrialisation and its subsequent effluents and catchment area degradation, chemical-intensive agriculture, illegal mining activities, and cultural misuse have all played a role in the destruction of these once bountiful ponds.

But it is not too late to turn these ponds around; to restore them to their former glory. In 2006, the community of Marwar Mundwa got to work. It was time to optimise the precious resource of Lakholav Pond, which lay at its feet.

Over the next 10 years, the pond was deepened and de-silted five times, increasing the cumulative storage capacity to 15.76 million litres. A 412-metre long canal was constructed to increase the runoff water flow into the pond from nearby catchment areas—further increasing storage capacity to 221 million litres. This was enough water to meet the needs of the community for two years, even in times of drought.

Just as the people of Mawar Mundwa became the driving force behind this rejuvenation, people in each and every pond-based community are the key. After all, they are the custodians of these ancient ponds. If we are to restore them to their former glory, revive them, and harness them to meet the water needs of the community, it is the people who must drive the change. Yet so often, the community looks towards the government to improve its environment. This attitude has to change if pond pollution is to be controlled at the source.

Non-profits and CSR teams have a great role to play in making people aware, especially the young generation, about the importance of these water bodies and guiding them in restoring them. Collective effort should be directed towards making people understand the long term benefits of conserving and managing these ancient and life-giving water bodies. India’s future depends upon it.

The writer is a CEO of Ambuja Cement Foundation.

1,586
Thank you for your comment, we value your opinion and the time you took to write to us!