The emergence of plant-based meat brands in India indicates there is a niche and well-aware consumer group that is hungry for more options on their plates. How do brands address this new conscious-food movement? 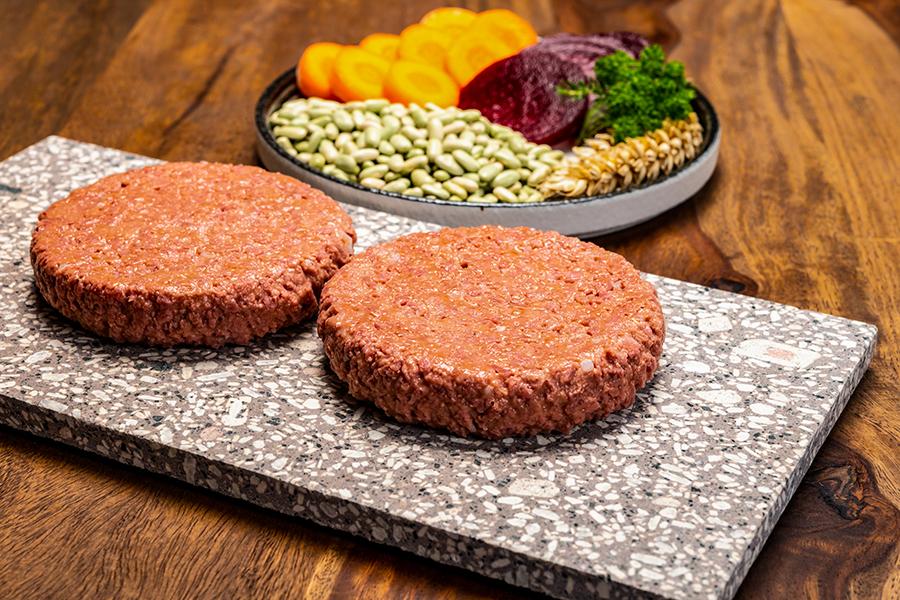 According to a recent study, the plant-based meat market in India is estimated at $30-40 million. Image: Shutterstock

Soya chaap, kathal biryani, and mushroom burger appeal to a unique set of foodies in India. Experts call them “closet non-vegetarians”—people who like a non-vegetarian food experience but are restricted in indulging in real “meat” for health, family, lifestyle or religious reasons. Then, there are some opting for these alternatives for their Instagram feed, or to join social movements so that they don’t feel the fear of missing out (FOMO) on a trend.

Choosing a bean slider over a lamb burger or beetroot kebabs over Lucknowi galouti kebabs are some of the choices Indians are making. Plant-based meats are estimated to be just six percent of total plant-based foods, according to a Euromonitor report. Even if it’s a niche in the country, the category is a sure shot growth driver given the increasing options in the space, say industry observers.

Bollywood couple Genelia and Riteish Deshmukh's new food venture, Imagine Meats was launched based on the new consumer demand, especially coming from the affluent markets. Disha Daswani, creative director of Schbang X—a specialised unit of the creative and technology transformation company Schbang—was a part of the team that developed the logo, packaging, visual design, and rolled out the launch campaign for Imagine Meats.

“When it comes to food, Indians will never compromise on the taste factor. Also, regionalisation of the products was important, so that it caters to diverse taste buds,” explains Daswani.

Imagine Meats went with a vibrant colour scheme to stand out in retail counters and e-retail listings. “Millennials, our key target audience, love good looking products. However, they don’t like too much information on it, but at the same time are conscious about what goes into the product,” says Daswani.

In its communications, Daswani and her team are making the founder-couple act and dance on trendy music for Instagram Reels. Interestingly, the brand got instant mass attention when Bollywood superstar Shah Rukh Khan tweeted about it. Khan shared a photoshopped picture of him in his famous arms-wide-open pose while holding packets of the plant-based meat brand. His tweet said, "My friends @geneliad & @Riteishd were discussing who would launch their Plant-Based Meats Venture. I opened my arms wide and said ‘Main Hoon Naa’….”

Money plant: The pricing storyAccording to a September 2021 study by retail broking company Nirmal Bang, as of today, the PBM (plant-based meat) market in India is estimated at $30-40 million, largely driven by the consumer (packaged) food followed by a small share of HORECA (Hotel/Restaurant/Catering).

The market size in India is likely to touch $500 million (excluding exports which is a multi-billion dollar market) three years from now, again driven by the consumer (packaged) food category.

The report says, contrary to the belief that consumption of PBM is just a metro-centric phenomenon, there is evidence that consumption is also being seen in interior parts of India where consumers are open to trying these products and are making repeat purchases.

Sarthak Oza, head of operations at GoodDot Foods, agrees with the findings of the report. “While the expectation is, only well-travelled and well-read people value veganism, we are seeing a lot of demand coming in from tier-II cities. We’ve met a lot of non-vegetarian people who’ve wanted to shift to vegetarianism but didn’t have the option of a protein with a similar taste and texture. This is where we thought we could create a product line that would be healthy and tasty,” he says.

GoodDot, plant-based meat and vegan food company, is also breaking price-related myths. Packaged vegan food need not come with a premium price tag. GoodDot’s bestselling item keema pav sells at Rs 29, and the most expensive item on the menu is priced at Rs 189.

The brand has seen a 100 percent year-on-year growth since its launch in 2017, and this year, they are expecting it to touch 200 percent.

Chirag Kenia, founder and managing partner of Mumbai-based direct-to-consumer brand Urban Platter, says meat alternatives as a category is growing because the innovation is consumer-led.

“We listen to how consumers want their alternatives to look, feel, and taste,” he tells Storyboard18, “We then work backwards to make it happen. Localisation is key.”

American versions of plant-version meats will not work in India, he says. When brands venture into this category to “latch onto the trend”, consumers don’t get what they want on their plates. “To seek credibility, brands in the category have to listen to consumers,” he adds.

When it comes to price, Kenia says India is a value-conscious market. That's why brands from the category don't hesitate to add a premium tag that justifies the innovation that goes behind the making of the products. Currently, Urban Platter is heavily investing in educational-based marketing campaigns via its social media platforms.

Startup brands like Shaka Harry, Blue Tribe, Vegan Meri Jaan, Evo Foods, Oh Veg, among a few others, are also driving the growth of this category.

Don’t fake itThe last decade saw a sharp rise in the Western influence of templating of food and health. “The relationship between food and health” is becoming scientific and “each food item is analysed for its caloric and nutrient value,” indicates Ruchira Jain, founder of Elevate Insights and, former VP, consumer insights, Swiggy. This has given momentum to the protein trend. However, when marketing alternative meats, “the right strategy is to leverage the consumer energy around diet consciousness and these foods being a naturally good source of protein vs the “fake meat” route,” suggests Jain.

She draws parallels with other food trends. “This generation is keen to enjoy the bads without the bad. We see this trend in the growing popularity of non-alcoholic beverages, the air fryer movement, and the popularity of traditional favourites such as biryani cooked in 'less guilt' avatars like brown rice.”

Kalyan Karmakar, a food writer and brand consultant of Finely Chopped Consulting, has similar views. He says, “The best way for brands in the segment is to take a more inclusive approach rather than making it about life philosophy. The idea is to make people aware of the importance of clean food and how veganism can help by landing health benefits without compromising on the joy of eating.”

Karmakar concludes that it is ideal for brands to approach the market with “respect and propose the idea of sustainability and health in a rational way rather than to get into a sanctimonious, lecturing mode.”

6,313
Thank you for your comment, we value your opinion and the time you took to write to us!

Tweets by @forbesindia
Prev
Storyboard18 | NFTs, Metaverse, C2C Future: What's in it for brands?
Next
Storyboard18 | Navigating advertising controversies in the age of outrage