As the meat industry struggles to respond to the outbreak, makers of vegan substitutes are ramping up production to meet new interest from shoppers 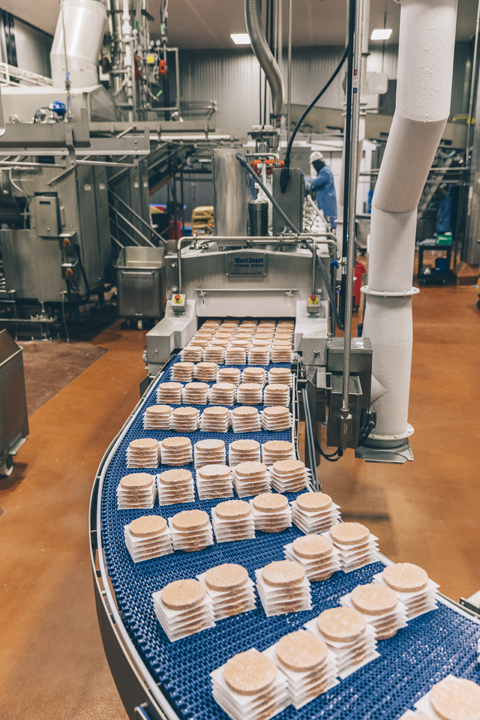 Plant-based burger patties on a production line at Impossible Foods in Oakland, Calif., Oct. 14, 2019. As the meat industry struggles to respond to the outbreak, makers of vegan substitutes are ramping up production to meet new interest from shoppers. (Matt Edge/The New York Times)

The news for the American meat industry over the past month has not been good. Slaughterhouses closed as the coronavirus sickened and killed workers. Even after President Donald Trump declared meat processing plants “critical infrastructure,” hundreds of Wendy’s restaurants ran out of hamburgers. As meat-processing plants have shut down, farmers have had to kill hundreds of thousands of pigs.

That hasn’t slowed demand for meat. Sales from April 12 to May 9 were 28% higher than in the four weeks ending Jan. 18, before the first reported case of coronavirus in the United States, according to data from Nielsen.

But the meat industry’s troubles may have provided a boost for plant-based meat substitutes, which had a jump of 35% in sales during the same period. (The increase just for uncooked products was more dramatic: 53% for the vegan products versus 34% for meat.)

To meet the demand, Impossible Foods has been hiring more workers, increasing pay and adding more shifts. Beyond Meat reported record sales in the first quarter of this year.

Those companies’ new generation of plant-based alternatives — developed in laboratories, with long lists of unfamiliar ingredients — had been slowly catching on with consumers. But some say that reports of illness among meat-processing workers have made them even more curious.

Before the pandemic, William Thomas, 19, usually bought ground beef and chicken on his weekly shopping trip near his home in Brookline, New Hampshire. Since April, he has been buying plant-based meat instead. “I’d always been trying to block out a lot of what was going on behind the scenes of the meat industry, but I can’t ignore it forever,” he said.

Thomas, who is currently unemployed, is now eating a mostly vegetarian diet for the first time in his life.

“With the pandemic around, a lot of the industries, you know, not taking the proper precautions to make sure everyone is safe, I feel like that would probably also go in toward the products,” he said.

Impossible Foods’ plant in Oakland, California, has not yet had any coronavirus cases, said the chief executive, Pat Brown. No cases have been reported at the North Carolina factory of Atlantic Natural Foods, which makes the Loma Linda line of plant-based foods, said Doug Hines, the company’s founder.

For years, plant-based meat alternatives, typically made of vegetables, legumes and grains, were widely considered of interest mostly to vegans and vegetarians. But in the past year, substitutes made with plant-based protein have shown up in fine-dining and fast-food restaurants; even some large meat companies have started producing them. Although their creation involves complex alchemy, some plant-based meats can cook up and taste just like ground beef.

Now, for the first time, plant-based meats are often competitive in price with ground beef, and sometimes easier to find, as fears of meat shortages prompt bulk buying.

During the pandemic, Monia Lauretti, 47, has been doing her grocery shopping online at Instacart. She is a pescatarian, but her family eats meat. The website had put a cap on the amount of burgers she could buy — just one package per family. Then she saw a pop-up ad for the Beyond Burger.

“I wondered, what is this? I’ve never seen this before,” said Lauretti, a stay-at-home parent on the Upper West Side of Manhattan. “They taste like normal beef burgers, and they are delicious.” Her 16-year-old son, Alessandro Dal Bon, liked them, too. So she’ll buy them again.

Impossible Foods, which before the pandemic sold more of its products in restaurants than in grocery stores, has expanded its retail footprint. Brown said his products are now sold in more than 3,000 stores, up from fewer than 200 in January. Its workforce of 653 full-time employees is up from 587 in January.

In the first quarter of the year, Beyond Meat, whose stock is publicly traded, reported net revenue of $97.1 million, an increase of 141% over last year. Its products are now in 25,000 grocery stores nationwide, and the company recently expanded into China.

“We were saying that by 2030, Beyond Meat could have a $1 billion in sales,” said Alexia Howard, the senior research analyst of U.S. food at Bernstein, an equity research group. “Now, we’re saying by the end of 2020, which is only 18 months later.”

Tweets by @forbesindia
PHOTOS: All the world's a masquerade
Restarting India: Bringing New Delhi back to life