Is Delhi ready to get back to work and live with Covid-19? 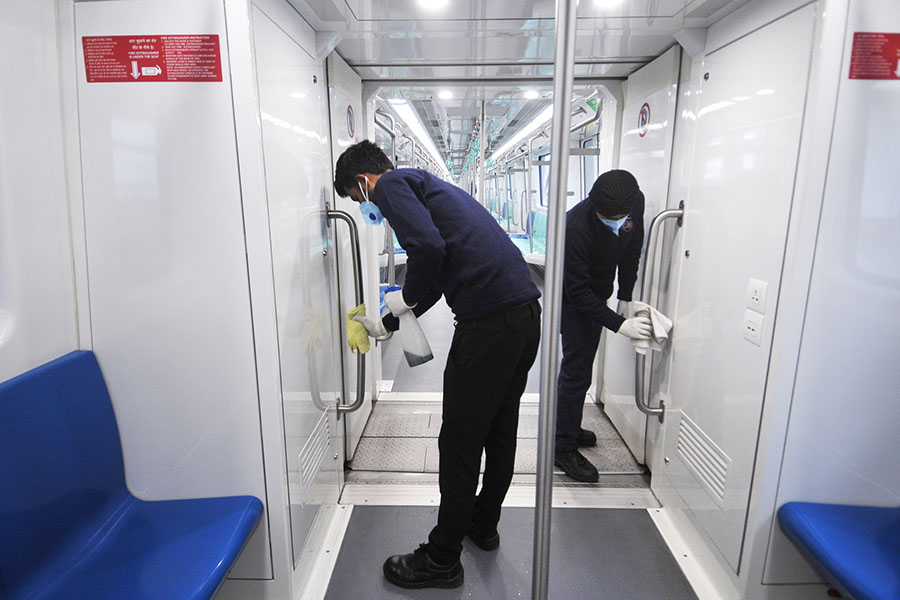 Noida Metro Rail Corporation (NMRC) has started special intensive clearing and sanitation drives at all the stations and inside the trains, in order to safeguard commuters against the Covid-19 pandemic
Image: Sunil Ghosh / Hindustan Times via Getty Images

Handling the Covid-19 crisis in New Delhi has not been easy. The national capital ranks fourth among states in the country with the largest number of coronavirus cases. As of mid-May, the number of cases swelled from 3,500 to over 8,400. Yet, the Arvind Kejriwal government has been vocal about restarting economic activities, with the focus firmly shifting to managing the containment zones—81 as of May 13—or hotspots.

“Once designated a containment zone, the government puts in place what we call operation Shield,” says a senior state government officer. The Shield protocol includes sealing a locality, home quarantine, isolation and tracking, essential supply, local sanitation, and door-to-door checking, and is usually put into effect for 28 days from the date of the last person testing positive. So far, it has also helped that over 75 percent of the cases in the capital has been asymptomatic, and not severe.

“Our team makes inspection of their home to ascertain whether social isolation can be observed or not,” Kejriwal had said earlier. “Our teams are in regular touch with such people and if needed, family members of the affected persons can contact officials. If there is lack of sufficient space at home, the patient is sent to a coronavirus care centre for 14 days.”

Over the past few weeks, the government has set up an empowered group comprising some of the state’s senior-most bureaucrats, experts and doctors to help contain the infections, while also ensuring measures to kickstart economic activity. The task force will look into emergency planning, procuring medical equipment, ensuring the availability of essential and medical supplies, ensuring social distancing, and strengthening hospital infrastructure.

Soon, as the number of cases in the state began to swell, the government began setting up buffer zones and containment areas. Once declared a containment zone, health workers screened its residents at least three times in 14 days. “Eventually, we had realised that instead of going after buffer zones with a larger radius, it was important to focus on localised containment zones,” Garg adds. That had also helped her handle the situation at the popular Bengali Market when three cases were reported.

Now, as the central government turns its attention to restarting the economy, Garg reckons that her job has become easier than before. “There is a lot of awareness. Even with the migrant movement taking place from our railway stations, people are following social distancing. They have understood the problem, and that cuts across sections of society. We have also spoken to traders’ associations and manufacturers, to ensure that the workplace sees significant changes.”

Among others, these include social distancing, use of hand sanitisers and screening. “We have taken them into confidence, and there is a mutual understanding as far as restarting activities is considered,” adds Garg. The administration is now awaiting rules to be laid out by the Narendra Modi administration to restart economic activities in the state from May 18.

Others such as Nidhi Srivastava, district magistrate of Central Delhi, reckons that her district is geared up for lockdown 4.0, when the government is expected to announce wide-scale relaxations. “Employers and shopkeepers have to ensure that various norms are followed while they restart activities,” says Srivastava. “There is wide-scale awareness which is helping us. We are constantly in touch with coordinators across commercial areas to ensure that supply chains aren’t disrupted or constraints do not happen. The medical teams have been active, visiting homes, and even ensuring that those affected do not face psychological issues.”

Srivastava’s central Delhi district comprises Old Delhi, and the task was significantly difficult during Ramzan. She also had to win the confidence of those who doubted the intention of the medical workers who were looking to collect data. “Today our doubling rate is 13 days, and we are ready to resume activities and enforce directions from the home ministry,” Srivastava says.

Additionally, the government has also been working closely with schools to shift towards online classrooms. “To ensure uninterrupted learning for our students, the North Municipal Corporation of Delhi announced online classes from March in all 700 schools and aided schools,” says Varsha Joshi, the commissioner of North Delhi Municipal Corporation. “Teachers were encouraged to create WhatsApp groups, class-section wise. The parents were a part of these groups. Teaching material called online learning teaching aids in the form of daily worksheets and self-made videos were created by a group of 74 mentor teachers.”

With the state looking to swing back to life once the lockdown is lifted, Kejriwal had also sought suggestion from people on relaxations for the fourth phase of the lockdown. Among others, he wanted the public to decide whether public transport system should begin in addition to markets and industrial areas. “Specially trained housekeeping staff are deployed at stations to clean passenger movement areas and associated equipment such as AFC gates, lifts and escalators to begin safe operations," the DMRC said in a tweet.

Rajiv Kumar Goel, president of the Bawana Manufacturers Welfare Association, one of the largest manufacturing clusters in Delhi, reckons that the health measures have been on track as far as restarting economic activities go. “We have begun work on single shifts, and the health initiatives have been absolutely on track,” Goel says. “However, there is no demand. And then there has to be a way to bring back the workers who have left. So it’s time for the government to now focus on tax breaks and subsidies to kick-start activities. We are ready to function with Covid-19.”

Tweets by @forbesindia
Plant-based 'meats' catch on in the pandemic
Photo of the Day: Delhi reels under heatwave