This is a great time to be young and Indian. The economic and political landscape is beginning to change, ideas are being recognised more than ever before, and the roadblocks to moving forward in varied directions are being removed, albeit gradually. For the youth of India, this can only be the beginning of exciting times. In a country where over half the population is under 25, it is natural to expect that the India of tomorrow will be driven by the ideas and achievements of the young Indian. 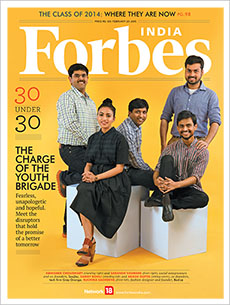 As Forbes India began putting together its second 30 Under 30 special issue—a celebration of the achievements and successes of those below the age of 30—it became amply clear to us that selecting those who will make the list is getting tougher every passing year. As young people begin giving shape to their aspirations and find ways in which to do so, they are coming up with ideas and achievements which compare with the very best in the world. Gone is the old debate about whether India can ever produce young entrepreneurs like Mark Zuckerberg of Facebook; it’s now a question of when a young Indian will come up with the next big idea for the world to sit up and take notice.

With this in mind, the editorial team drew up a list which we are proud to present before you: People who, even before they turn 30, have made an impact across disciplines—whether it is entrepreneurship (including those with a clear social impact), sport, music, health care, law, design, art and culture, to name just a few. As Executive Editor Abhilasha Khaitan, who leads the 30 Under 30 project, points out in her overview, we have found enough achievers and their successes underscore the fact that risk-taking by the youth is not confined to the West any longer.

Over weeks of arduous research and conversations with experts across domains, Forbes India’s editors put together a long-list of over 300 candidates across 13 categories, including those who nominated themselves by way of online applications. The eventual list of 30 was arrived at by us after much debate and discussion and inputs from our experts. I must add that in these times, where young people are powering ahead with ideas and shaping change, a list of this kind can never be exhaustive. What we bring to you in this issue is a sample of the enormous possibilities which lie ahead for the young Indian. The canvas is ready to be painted on.

(This story appears in the 20 February, 2015 issue of Forbes India. You can buy our tablet version from Magzter.com. To visit our Archives, click here.)

Tweets by @forbes_india
Beyond brick & mortar: Inside Grundfos Pumps India
Podcast: The 30 young Indians you need to know about