Neeraj Roy was caught in the middle of the IT bust. A calm head and feet firmly planted on the ground saw him emerge from the rubble around him

Name
Neeraj Roy
Job
Co-founder, Hungama.com
Lessons in Life
1. His family’s restaurant business taught him that you have to build value ahead of valuation and that value gets created one plate, one customer at a time.
2. When ICICI Ventures pulled out funding from the fledgling company, it taught Roy and his people how to stand on their own feet.

Neeraj Roy knew he would be an entrepreneur. The question was when and doing exactly what? Born in Allahabad, on August 13, 1967, he had seen his father start the El Chico espresso and snack bar with all of Rs 20,000. Seeing him play more cricket than study, his mother packed him off to a boarding school at eight. The process of grounding began at St. Joseph’s at Nainital and one day he returned serious enough to actually top his class at the Allahabad University. Then came the turn to do his MBA at Sydenham College in Mumbai and the break at the Taj Hotels followed. 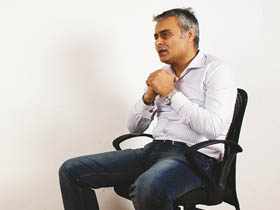 Image: Dinesh Krishnan
“I was selling hotel rooms and in the course of my work, frequently ran into the likes of Ratan Tata, J.J. Irani and Mukesh Ambani. The usual ‘How was your stay, Sir’ and the moments of inane conversation actually became opportunities to converse about business.
“I was selling hotel rooms and in the course of my work, frequently ran into the likes of Ratan Tata, J.J. Irani and Mukesh Ambani. The usual ‘How was your stay, Sir’ and the moments of inane conversation actually became opportunities to converse about business. I used to research every industry my guests came from. Businesses fascinated me. As I met people of eminence, the fire of entrepreneurship was getting stoked deep inside. The search for the calling was actually a two-step process.”
First, he wanted to have a taste of the financial sector. He reached out to a few classmates. This led to a meeting with Prime Securities in Mumbai. He worked there for a little more than four years during what turned out to be turbulent times for the financial sector. “The timing to get in and out of the financial services business could not have been any worse. But this is where I met Ashish Kacholia and Hiren Ved with whom the dots were to connect in the future. In August 1998, Ashish attended the Internet World exhibition and returned excited to tell me that it was the way to go.
I had just opened my own e-mail account and had bought a few books on Amazon.com and barring that, I had no exposure to technology, entertainment or the media. But something in the idea of convergence attracted me. Ashish, Hiren, Lashit [Sanghvi], Rakesh [Jhunjhunwala] and I started Hungama.com .”
At a personal level however, it was a bad time to start his entrepreneurial journey. He was coming to terms with a failed relationship. For nine out of 10 people, a time of personal setback is a signal to stall. Not for Neeraj Roy. In the days ahead, hungama.com brought bewilderment before it brought anything else. It was a wobbly Rs. 33 lakh company based out of a rickety structure in Colaba, Mumbai, and yet was making enough waves to be noticed by mail.com chairman Gerry Gorman who now wanted to buy them out for $33 million! How do you stay grounded with something like that?
“I remember the day. We had spent the previous day with Frank Graziano, the executive vice president and Gerry himself. Gerry’s vision was to combine the mail business with the portal. They were riding on a fancy market cap of a billion and a half dollars. They had missed acquiring Indiaworld and this, they thought, was their chance. But the entire concept looked incredible — the business model itself, the idea that you could have revenue of Rs. 33 lakh and a valuation of $33 million!
“But even as we were negotiating, the AOL Time Warner merger took place and from that point of high, began the steady fall for everyone. We returned home, in mid-May, we called the deal off. It was just too illusory. Mail.com stocks had fallen to one-fifth of their one-time high by then.
“My father would always tell me that the highest mortality rate is in the restaurant business. That makes you very real. You learn that you have to build value ahead of valuation and that value gets created one plate, one customer at a time. At hungama.com, we had not created value yet. We grounded ourselves.
“We needed some money all right. So we went to ICICI Venture in October 2000. They agreed to invest and disbursed 55 percent of the money. Then 9/11 happened. On October 17, ICICI Venture called to say that they would not be able to disburse the balance 45 percent. At the time, our revenues were just Rs. 25 lakh a month, there was money enough to last all of five weeks of operations and the principal investor was pulling the plug.
“I called my entire team in and told them about the ICICI decision. I told them that to survive, we had to make money. By switching the funds off, ICICI did the best thing ever to our business. From that day on, there was no looking back up until we entered the mobile business in 2004. We did not need a single rupee in debt or investment. The entire team rallied. In 2004, only when we decided to enter the mobile business that Rakesh Jhunjhunwala wrote us a cheque for Rs. 2 crore. This is also the time when we went back to ICICI and bought them out.”
The 42-year-old sitting in front of me in a light-grey striped shirt with denim jeans has dressed to look casual. The only giveaway is a pair of Mont Blanc cuff-links. Other than that, there is no telling that the man sitting across runs one of the most valued businesses in the digital entertainment and mobile media services space. He employs 700 people, has run more than 2,000 brand campaigns on the Internet, exclusively sources content from 300 providers and distributes it in 60 countries over 500 networks.
It is time to leave. I see a framed picture of a stunningly beautiful woman behind him. “She is Raunaq”, he says, “We met after Hungama happened. After a year of seeing each other, we got married.” As I am leaving, Raunaq walks in. As Neeraj introduces me I tease her, “So, you are the woman in his life?”
“No”, she laughingly clarifies, “That one, is our daughter and she is just half my height”.
It is not just new leaves, now I see the buds and wonder to myself if there is ever a “good time” in anyone’s life to start a new business?

Tweets by @forbes_india
Moser Baer: Sunburnt
We Don’t Make All The Profit We Can