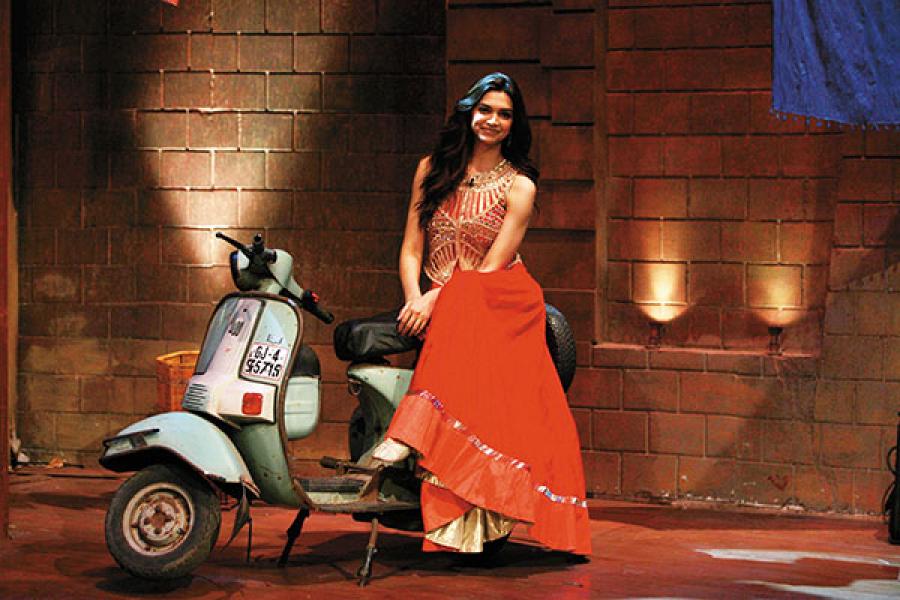 As business journalists, we have learnt to listen to numbers. They, in turn, have told us compelling stories. In the past one year, there has been one set of figures which seem to be adding up faster than gold pieces in the early levels of Temple Run. They paint a fairytale for Deepika Padukone.

Trade pundits are, far less poetically, calling it her Rs 600-crore story because that is the estimated net box office collection for the four Padukone films that have stormed Bollywood over the last year (of which three are in our time period). And as Sanjay Leela Bhansali’s Goliyon Ki Raasleela Ram-Leela continues its dream run, there doesn’t seem to be a discordant note in her narrative.

When we meet Padukone, she is  still catching her breath. The four back-to-back releases—with the last film being shot during  gaps between two others—have left her breathless.

That seems to be a state she is comfortable with.

In 2011, enticed by marquee names like Sanjay Leela Bhansali and Shah Rukh Khan, she had plunged in, signing films with a greed that is the trademark of struggling actors. In doing so, she signed away two years of her life. She left no space even for film promotions or endorsements. “The pace was abnormal. I worked 365 days—often doing double shifts for months at a time. There were no Sundays, no holidays,” she says.  The decision to go flat out was not made on an impulse. “When I got the offers, I sat with my business manager and we decided to go for it,” she says. “The ball was in my court. I decided to give up my life to do these films. I worked during all the breaks.” While she gave up on normal things like sleeping for eight hours; she also had to make compromises with her craft. Her role as the smouldering seductress in  Ram-Leela was essayed entirely on the fly, she says. There was just no time to prepare. “When I got into the film—the set was ready; they were just waiting for me,” she says. Her co-star Ranveer Singh, on the other hand, had researched his part. He had gone to Gujarat and spent time prepping for his character.

Like some other actors, Padukone disapproves of measuring achievement in terms of the money her films make. And she is right. Her commercial success is just one of the many signs of her coming of age as an actor. More palpable are the other signals—the hordes outside the studios where she shoots, the hoardings and magazine covers, and the awards that will inevitably follow.

Though the climb has been the steepest in the past year, it hasn’t always been smooth. Padukone began as a teenage model in Bangalore under the tutelage of Coorgi fashion designer and model-trainer Prasad Bidapa. Among her memorable campaigns at the time were Close Up and Liril. The transition to films was through music videos, two of them with singer-actor-director Himesh Reshammiya. By 2006, she had also debuted on the catwalk at the Lakme Fashion Week and gained instant fame by being on the hugely popular Kingfisher calendar.

Padukone’s story, thereafter, acquires a Cinderella-like attribute. Her first Hindi film, the reincarnation melodrama Om Shanti Om (2007) by Farah Khan, was the perfect launch vehicle. But while the film, was a commercial success, Padukone did not impress everyone with her performance. One famous director, who will not go on record for fear of being forced to eat baked-crow, had this to say then, “These models can’t really act. They look great—but the moment they open their mouth, you want to run away.”

Ironically, Padukone’s struggle over the next three-four years seemed to prove him right. On the face of it, she was doing everything right: She had the right opportunities, films with established heroes and directors. Yet many of the ventures flopped.

Films like Chandni Chowk to China with Akshay Kumar, the psycho-thriller Karthik Calling Karthik with Farhan Akhtar, Lafangey Parindey where she played a blind girl trying to skate, and comedy drama Desi Boyz—they hardly set the box office on fire. Many of these were challenging roles, unconventional characters, but market-oriented metrics, where star-appeal is judged by box office hits, indicated that she was losing her way.

It was almost like a light had been switched on. In mid-2012, when Homi Adajania’s Cocktail was released, audiences felt a difference. This was Padukone energised, stronger and shining like never before. 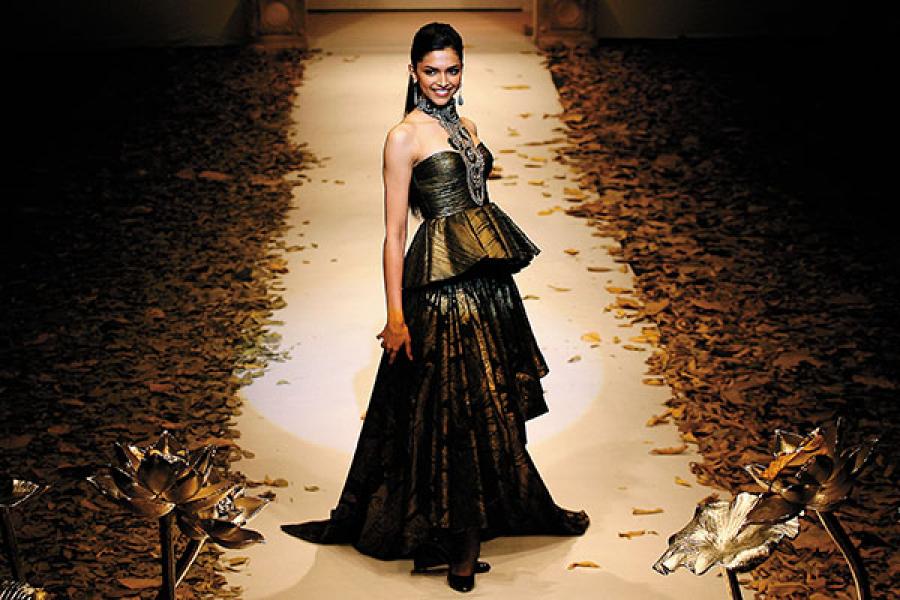 Image: Vijay Mathur / Reuters
As Veronica, the material girl who embraces a lifestyle of  ‘sex, drugs and rock-n-roll’, she was the character that everyone remembered long after they had left the theatre. Padukone says that Veronica is the toughest character she has ever played. Adajania, of Being Cyrus fame, had warned her early that this was a character that had been done many times by others. The performance could very easily look clichéd. She chooses to call it an “author-backed part”, one that she knew, as soon as she read the script, could stand out.

Her research began in the nightclubs of London six months before the film was shot. “I went with Homi to these bars. I’d see how the girls danced, how they spoke, how people interacted with the bouncers at the door,” she says. The challenge was also to play this rich, wild sybarite and still keep her likeable.

Veteran film critic Khalid Mohamed says he loved the high-energy number Mein Sharabi, where an uninhibited Veronica grooves all night. “She gave me the goosebumps with that one,” he says. Mohamed believes the young actress has all the ammo she needs. “She looks great. Her acting is implosive in a landscape where most actors are very illustrative,” he says.
The transformation is palpable: The rapid success after muddling along for four years.

Anirban Blah, CEO of celebrity management firm CAA Kwan, who has been Padukone’s image manager for two years, says her hunger to improve sets her apart. She was earlier seen as a giggly, gorgeous girl. The industry had typecast her. In the public eye, she was a fashion icon, a stunner. The perception has changed now. Everyone talks about her doing meaningful roles in commercial cinema. “She is no longer a prop,” he says.

One big difference between Padukone then and now is that people are talking more about her films and less about her boyfriends. Does she think there is a correlation between her successful streak and the fact that her personal life is no longer generating paparazzi-frenzy? “I am very traditional and believe in giving a hundred percent to a relationship when I am in it. There is no in-between,” she says. Relationships can be time-consuming, she admits, smiling as she thinks back. There probably is a correlation, she muses. It has also helped that she is not distracted, she says, as she has more time for her work now.

At 27, Padukone has time on her side. And the industry has only just begun to sit up to take notice. Blah hopes there will be a rich haul of awards this year. Critics wonder if she will break a record set by Meena Kumari in 1963. That year, she was the only actress nominated in the Best Actress category (in the Filmfare awards) for three of her films. She won for Sahib, Biwi aur Ghulam.

The competitive landscape is quite dull at this time. Most of her A-list rivals are four to five years older. Katrina, Kareena and Priyanka Chopra have been around for some time. Anushka Sharma and Kangana Ranaut are still finding their feet. Probably the biggest proof of Padukone’s popularity is that she is now the first choice for the big directors. This allows her to command higher payments than any other female lead in Bollywood; this also helps her choose more substantial roles.

Her decisions on which film to sign are still based on who she wants to work with. “I want to work with Ranbir Kapoor and Imtiaz Ali again, and so I signed up even without the narration,” she says. The film is tentatively titled Window Seat, and she begins shooting next year.

So if she does not look for meaty roles, how will she manage to have a lasting impact on the audience? Veteran actress Sharmila Tagore has been quoted widely last week for being very critical of the portrayal of women in Hindi cinema. At a lecture in Delhi on ‘Representation of Women in Indian Cinema and Beyond’, she said male actors dominate the Hindi film industry and scripts are written especially for them. The films continue to brandish an image of women which is largely decorative and secondary, she said.
|
Many in the film industry feel that actors like Padukone could be breaking this mould. Mohamed says, in many ways, she seems to think like a man. “She is forthcoming and direct. Knows what she wants, and gets it. She does not use her femininity to project herself,” he says.

This is tougher while working with big-ticket male actors, who are often very careful about their screen presence. Chennai Express, where Padukone plays a saucy Meenalochani alongside Shah Rukh Khan, was one such film. Despite the larger-than-life male lead, she made an impact.

Padukone says the roles often happen organically while the film is being made. “On paper, the part [in Chennai Express] was equal. The girl and the boy were both there in every scene. It depended entirely on who they cast, and what she did with it,’’ she says modestly. At the heart of it, she says, it boils down to what an actor does to make a role his or her own. And Padukone seems to have mastered that art.

Get the latest stories, videos, and podcasts from Forbes India directly in your inbox every Saturday
Thank you for your comment, we value your opinion and the time you took to write to us!
Comments 14

Tweets by @forbesindia
How Mark Mascarenhas Redefined Celebrity Management
In my mind I'm not different from any male actor: Deepika Padukone