Ronit Roy has endured a long struggle to enjoy enormous popularity on the small screen. And he stands out in his film appearances too 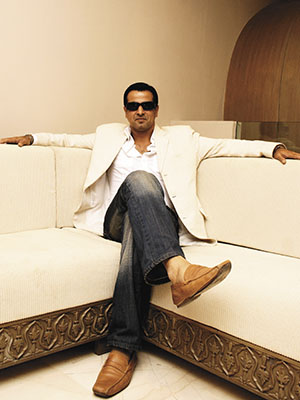 Actor Ronit Roy entered the world of films to enjoy the life of a superstar. “I wanted a long white Mercedes, girls yelling for me… living a posh life, wearing dark glasses even at night. I wanted all that,” he admits. He believed he was on the track to stardom after his debut film Jaan Tere Naam (1992) became a commercial hit. But Roy had not accounted for the fickle nature of the film industry and the changing fortunes at the box office every Friday. His next seven releases were flops.

Reality hit him hard. Forget owning a Mercedes, he would walk for over five kilometres from Versova to his parents’ home in Oshiwara to borrow money for petrol. And dinner for him comprised two pavs (bread rolls) soaked in water. Over two decades later, looking back at that difficult phase in his life, Roy says the problem was with him. “When my manager went to filmmakers, they would ask, ‘Why should we sign Ronit when we can work with a smaller actor?’” he tells Forbes India at the Bru Café in Andheri (West), Mumbai, on a sultry October afternoon.

An unexpected call from the reputed TV production house, Balaji Telefilms, in 2002 proved to be a lifeline for Roy’s dormant career. TV, says Roy, gave him a break from a life in distress. “When I was told that I would be paid Rs 250 a day, my mouth started watering. I would work for 20 days and for the remaining days of the month, I would party… alcohol, mobile, petrol. It allowed me to buy a mobile phone on installments,” says Roy, dressed in a faded blue T-shirt, cargos, a cap and suede shoes.

Roy, who holds a diploma in catering and applied nutrition technology from The Maharaja Sayajirao University of Baroda, has come a long way since. Today, at 50, he is among the highest paid actors in the Indian TV industry and a bankable performer in films too. Besides, he is now the proud owner of a Porsche Cayenne which costs upwards of Rs 1 crore and runs a security agency, Ace Security and Protection, which offers personal security to megastars like Aamir Khan and Shah Rukh Khan.

However, despite his substantial stature in Indian entertainment, and having done plenty of work in the period under review, he just missed making it to the 2015 Forbes India Celebrity 100 List because of a low fame quotient. But his stardom cannot be denied. And Roy has had to work immensely hard for it.

In the last 15 years, he has persevered to carve a unique place for himself as an actor. And having seen the worst early on in his career, he is now at peace with himself and remains unaffected by things around him. While money remains important, he says it is not the driving force in his life. “I love money. I would have it rather than not. I am happy with what I have. If I make a little more than my expenses, it would be good,” he says.

When we met him, Roy had just wound up three TV projects —romantic drama Itna Karo Na Mujhe Pyaar, courtroom series Adaalat and family game show Deal or No Deal. He claims he doesn’t know what he’ll do next except for scouting for a new house and going to Goa, which is a “retreat” for him.

“What’s next doesn’t bother me. I am not thinking about it right now,” he says. “I have some interesting scripts and I am considering them. The role-money balance is not working well. I need to make a basic amount of money. There is a certain economic angle to the work I do.”

Even during his short ‘break’, Roy is working on two scripts of his own and starts shooting for a new film, Saat Kadam, a sports drama produced by Eros International Media and directed by Mohit Kumar Jha. Roy plays father to a 35-year-old man (actor Amit Sadh) and is excited about his role. “It’s a different father; people will see me beyond strictness. I play what I am pretty much like in real life.” Here he refers to his portrayal of a stern father in films like Udaan (2010) and 2 States (2014).

Getting him to accept a role, the actor says, needs a lot of convincing. He says he typically starts with a ‘no’ when approached for a role. “Let the script convince me. You pick up good things that way,” says Roy, who comes from a business family. But he’s not stubborn and believes trusting the filmmaker’s vision is also important.

For instance, he was not willing to take up 2 States, but agreed only after filmmaker Karan Johar convinced him to do so. On the other hand, he read the script of Ugly only once and told director Anurag Kashyap instantly that he’ll do the film.

His role of an abusive father in Udaan, he says, needed a lot of preparation. The famous scene where he lays down the house rules was particularly difficult. Roy could not get it right even after six-seven takes, leaving director Vikramaditya Motwane unhappy. “I asked for a pack up. I locked myself and slept. Next day, the shot was executed in one take,” he says.

While films have been few and far in between, it is TV that made Roy a household name. His popularity went through the roof as Rishabh Bajaj in the family drama Kasautii Zindagii Kay and Mihir Virani in the long-running soap opera Kyunki Saas Bhi Kabhi Bahu Thi on the small screen.

Television, though, has undergone a sea change since and Roy is well aware of it. His latest serial Itna Karo Na Mujhe Pyaar went off air in one year. This is the first serial featuring him which did not run beyond 12 months. Adaalat and Kasautii Zindagii Kay ran for five and seven years respectively.

“We can’t repeat 2002 in 2015-16. The audience has grown. With the internet and YouTube, it’s a digital world. Most people (production houses) still want to do more of the same. It’s only wine that works that way,” says Roy.

He emphasises that in TV serials, one needs to quickly realise when they are beginning to lose their way with the storyline and audience interest. “You need to walk away then,” he says.

It is this deep understanding of the medium that will hold him in good stead when he dons the hat of a writer-producer.

For one of his TV scripts, which is a historical drama, Roy is in talks with a big production house (he refuses to divulge the name at this point) to co-produce the serial. He says it would need three to four directors and one master director. Roy, who is trained to be a director, has edited over 100 commercials and is never afraid of giving his creative inputs.

Actor Amit Sadh, who worked with Roy in Guddu Rangeela and also stars in Saat Kadam, says that while the world sees the exterior side of Roy—a complex man with an aura of a successful actor—there is an evolved spiritual side to him as well.

“There is a more evolved spiritual man behind his exterior; he is into meditation, he goes to monasteries. He has a lot of compassion, a very balanced way of looking at things,” says Sadh, adding that Roy is a voracious reader and musician. Roy is currently learning to play the flute and the saxophone.

Sadh says he has grown close to Roy over time. “He is inspiring me to save money and now I am going to buy a car,” the 32-year-old actor told Forbes India.

Roy’s long association with television has also brought a sense of discipline in his life. He devotes two hours daily to fitness, 10-12 hours to work and the remaining to his family—his wife Neelam and two children. “I got bored of my frivolousness,” he says, adding that he gave up on friends and social life long ago. “A few friends are there; you just need four shoulders.”

He adores his family and he claims everyone knows each other’s phone passwords. Only the children are not given passwords for the iPad. Neelam and he never fight, says Roy. “She runs my house. I don’t even have the keys,” he says.

Like his ties with his family, Roy has also maintained his strong association with Balaji Telefilms, which provided him the platform to exhibit his talent and eventually become a celebrity. He says he would do any role for the production house without any questions asked or negotiations because he trusts Ekta Kapoor (joint managing director and creative director of Balaji Telefilms) completely.

He’s less emotional and more pragmatic as far as his business interests are concerned. “I have deliberately kept the security business small. In my experience, when things grow bigger, problems also become bigger. The business is built on trust. When it’s small, it’s easier to manage trust. With my client list, I can’t afford a blip,” he says.

Roy himself does not feel the need for security, though, and travels without guards. Having witnessed the highs and lows in a long career, he is now secure with his craft.

(This story appears in the 25 December, 2015 issue of Forbes India. To visit our Archives, click here.)

Tweets by @forbesindia
The cynicism towards India is rapidly fading away: Amitabh Bachchan
For Irrfan Khan, the world is not enough