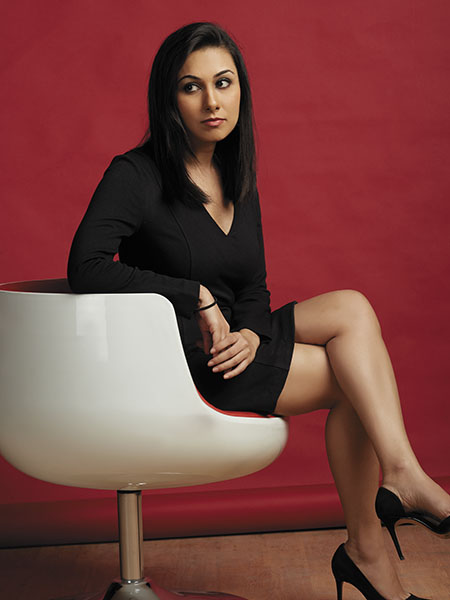 Neha Juneja travelled across the country to understand the problems faced by the average Indian
Image: Mexy Xavier

Neha Juneja and Ankit Mathur were batchmates at Delhi College of Engineering between 2002 and 2006. After their first venture, Aisapaisa.com, a portal that provided futures and options prices, went bust during the 2008 financial crisis, they began exploring business opportunities in everyday problems.

Along with co-founder Satvik Upadhyaya, the trio spent the first half of 2009 “figuring out” issues affecting the common man. “We travelled separately for a month across the country. We saw there was little happening to improve the quality of life of an average Indian,” says Juneja, 33. While Upadhyaya quit in 2010, Juneja and Mathur spent the next year executing renewable energy projects in rural areas. Meanwhile, they were joined by Shoeb Kazi.

In 2011, they decided to launch products of their own. What stayed with them from their travels was the sight of women using mud stoves in villages. “We saw smoke emanating from every household. ‘How difficult would it be to build an efficient burning device?’ we asked ourselves,” says Juneja.

Since then, Greenway Grameen Infra, founded in 2011, has been at it. The company has sold about 8 lakh units of its biomass stoves made of steel and aluminum that emit 70 percent less smoke and consume about 50 percent less fuel than conventional mud variants across India and South America. The company clocked ₹25 crore in revenue in FY17. It even started selling solar-powered products such as lamps and a dish antenna service in 2017.

Greenway sells its products through retail outlets and tie-ups with microfinance organisations, banks, dairy cooperatives and NGOs. However, things didn’t begin smoothly. The first variant of its stove, piloted in Wardha, Maharashtra, in 2011, tanked. The team had increased the height of the stove by 6 inches from 8 inches. Women weren’t comfortable with the height even as the founders chose efficiency over convenience. Explains Juneja, “The taller your internal combustion chamber is, the less smoky it is.”

The company also fell through with its initial set of suppliers. Juneja claims one of them was caught selling counterfeit Greenway products. Eventually, everything started to fall in place.

Close on the heels of its first fundraise in 2016—$2.5 million from Acumen Fund, Genpact’s former chief executive Pramod Bhasin and Vikram Gandhi, founder of Asha Impact Fund—the company leased a manufacturing unit in Vadodara that streamlined supply. “Juneja is highly entrepreneurial, spots an opportunity and goes deep into it. Until they raised funds in 2016, they largely ran on prize money won at various competitions. And they built a ₹10-crore revenue company by then,” says Nagaraja Prakasam, partner at Acumen Fund.