Hima Das: On the fast track 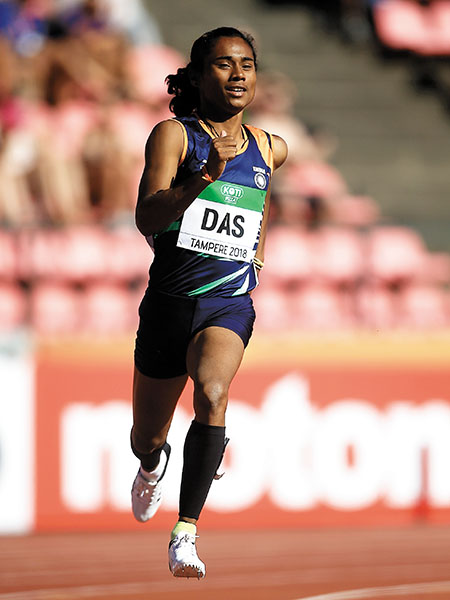 At the end of 35 seconds, Hima Das was fifth among eight athletes in the 400-metres race at the World Under-20 Athletics Championships, held in Tampere, Finland, in July 2018. In the next seven seconds, she left all her competitors behind before finishing first at 51.46 seconds. In doing so, she became the first Indian to win a gold at an international track event. “I had started the race slowly as part of my tactics to conserve energy,” says Das. “It was a magnificent feeling to hold the national flag in front of so many people, especially overseas. That moment was a result of years of sacrifice by me, my family and a lot of people along the way… it is among the best moments of my life so far.”

Das, the daughter of farmer parents from the nondescript village of Dhing in Assam, continued to garner more glory last year: A silver at the Asian Games in Jakarta, Indonesia, with a record 50.79-seconds finish in 400 metres. She followed that with a gold at the women’s 4×400 metres relay and a silver. She also received the Arjuna Award, India’s second highest sporting honour.

For someone who would travel an entire day in a bus to make it to the national camp till a day before the selection trials, life has undergone a sea change. “Now I get to practise with shoes that have my name on it,” says Das. But success to her is much more personal than money and fame. “It’s about goals. Achieving them before moving on to the next one,” she says.

Despite her achievements, Das, who once played football with boys, refuses to sit on her laurels. She is constantly striving to better her timing. “Hima is a quick learner and has the natural talent to be one of India’s finest athletes,” says her coach Nipon Das.

With the Olympics scheduled for 2020, Das could well make the headlines again.