OYO Rooms' Ritesh Agarwal sells an experience, and lives it too 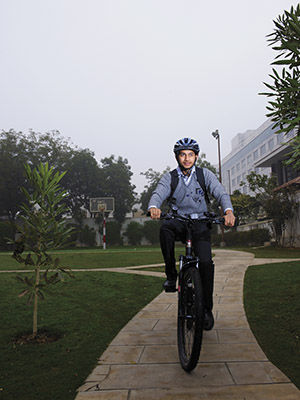 
The next time you stay in an OYO Rooms branded hotel and notice a tall, thin guy with tousled hair staying in the room next to yours, chances are you’ve spotted Ritesh Agarwal. The founder of OYO Rooms believes in “living the experience” he is selling. “Every week, I go to an OYO Rooms hotel to get first-hand experience,” says Agarwal.

This attention to detail is paying off: OYO Rooms is the largest branded network of budget hotels in India, with over 4,000 hotels in more than 160 cities.

The OYO Rooms model is simple and differentiated (this is no me-too Airbnb, for instance): It partners with hotels to standardise rooms under the OYO Rooms brand so that the traveller experience is the same across cities, including free WiFi, breakfast and spotless white bed linen, with a per-night cost between Rs 999 and Rs 5,400. The firm supports hotel owners by training their staff in house-keeping and services, uniformity of supplies and technology integration. OYO Rooms works on a commission model, an average of 20 percent on the total booking value facilitated by it.

Investors have bought into his story. And into his approach. OYO Rooms has raised over $125 million from SoftBank, Greenoaks Capital, Sequoia Capital and Lightspeed India and several angel investors. “He is very receptive to investor ask and in filling his own gaps. We like his ability to communicate and convince; he gives us confidence that he can execute,” says Sanjay Mehta, an angel investor in OYO Rooms and founder of MAIA Intelligence.

The boy who once sold mobile SIM cards has had a prodigious career so far, even penning a book, The Encyclopaedia of Indian Engineering Colleges, at 17. A college dropout, he became the first resident Indian at 19 to win the prestigious Thiel Fellowship, a two-year programme started by PayPal founder Peter Thiel.

Tweets by @forbes_india
Stay invested in the markets, despite global challenges
Richa Chadha: The unconventional actor