They dream and they do. Sometimes, they falter. But they never stop trying

Forbes India’s 30 Under 30 project, now in its third year, has typically been the cause of some panic: Would it be easy to find 30 standout under-30s in India? But this time, we were quietly confident from the outset. For two reasons: One, the class of 2014. Two, the class of 2015.

Let’s face it. Looking for 30 over-30s who are breaking new ground seems like a tougher assignment today.

This is the age of the big dreamer, of the kid with a plan and the chutzpah to action it. The generational shift has never been more palpable than now—just watch the latest edition of Star Wars for confirmation.

Okay, so Kylo Ren or Rey didn’t make the cut (only Indian and, more importantly, non-fictional people are allowed). But this year’s 30 Under 30 list is stellar nonetheless.

Take the founder and CEO of OYO Rooms. Ritesh Agarwal has become synonymous with innovation in the Indian ecommerce space, devising a model that isn’t a mere me-too of market disruptor Airbnb. But, at 22, Agarwal isn’t even the youngest. That tag goes to 19-year-old Harsh Songra, who was afflicted by a neurological disorder at the age of 11, and used his condition as the inspiration for an app that allows parents to track the growth of their child in the early years.

His spunk is only rivalled by that of Arunima Sinha, 28, who took up mountaineering as an amputee, after losing a leg in 2011 when she was thrown out of a train by thieves. Astoundingly, she has not just summitted Mount Everest, but also several other tough peaks across five continents.

No less brave is Shreya Singhal, just 24 and already a vocal advocate for the freedom of speech and expression, especially on the internet.

These young men and women not only fill us with admiration but also, to borrow an acronym from their generation, major FOMO (fear of missing out—yes, that’s a thing).

To compound this angst, let’s remember this list is not exhaustive. It is impossible to cover the geographical expanse of this country and reach every potential candidate. But, as always, our aim is to find the best possible names that meet our three criteria: The extent of the impact of an achievement in a short span of time and its ability to disrupt the status quo; scalability of the business or line of work; and enough indication of being a long-term player. And, as with previous lists, well-established names as well as those who have access to an influential lineage are not considered.

These limitations are not constraints, however. Rather, they ensure a rigour and robustness that is reflected in the alumni. More notably, in the lack of nerves.

Yes, the under-30s are making our jobs easy. 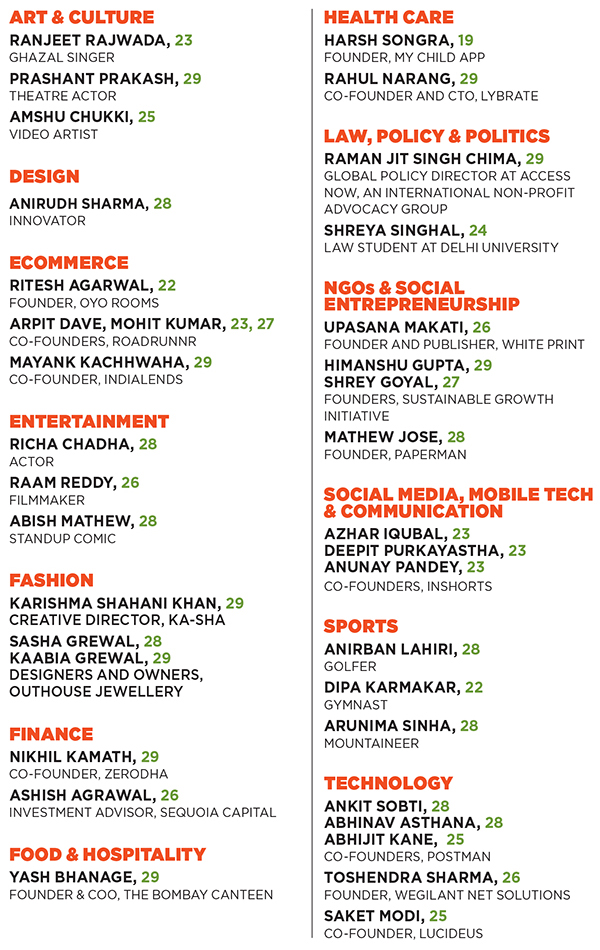 Methodology
The research process was three-fold: One, interviews by Forbes India staffers with sources across relevant categories as well as through studies of databases and media coverage. Two, on forbesindia.com, inviting applications from, or nominations of, entrepreneurs and professionals who fit the criteria. Three, spreading the word on social media.

This helped us arrive at a longlist of over 300 names across 13 categories. (We had to drop one category, science and greentech, for lack of adequate representation.) The next step was narrowing down to a ‘short long’ list—the names most likely to make it to the top 30. This pool of around 100-odd names was decided in consultation with experts and observers. The last stage of separating the final 30 from the other contenders was a judgement call. But armed with expert views, the Forbes India editorial team debated, argued and vetoed its way down to the final 30.