Riding on the success of the blockbuster Fogg deodorant, Darshan Patel is confident of turning Vini Cosmetics into a multi-brand company 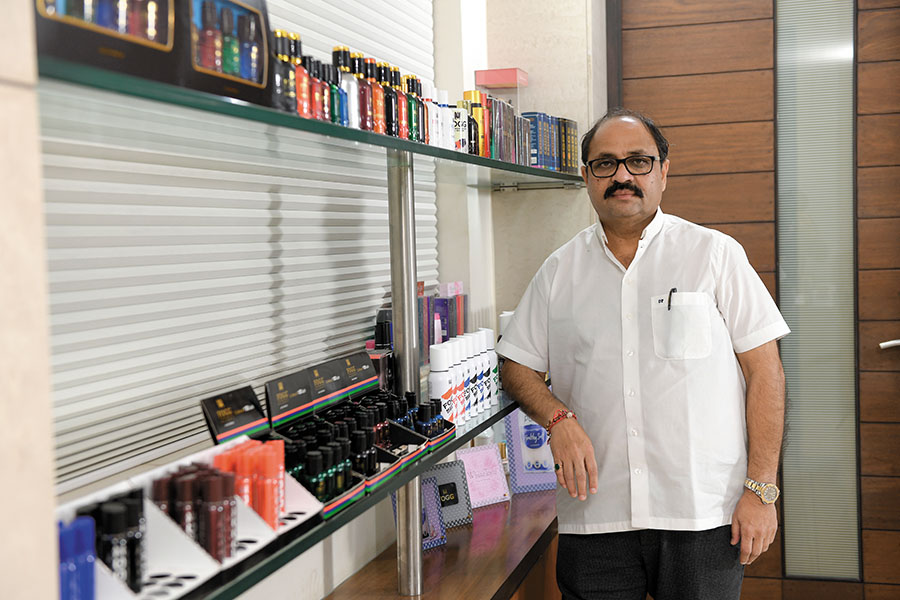 
When a brand becomes synonymous with an entire product category, you know you have a winner on your hands. And Darshan Patel has created many such winners. Right from his years at Paras Pharmaceuticals, where he launched Moov, Krack and Itch Guard, to starting his own venture, Vini Cosmetics, and launching a blockbuster, Fogg, in the deodorant segment, Patel has made a habit out of making category-defining products.

Through meticulous and insightful market and consumer research, Patel has, time and again, identified untapped niches in consumer products, and launched brands that have rapidly gained market share and category dominance. With Vini’s annual revenues of ₹930 crore in FY19 and an estimated ₹1,100 crore by FY20, and rumours afloat of a fresh round of funding, Patel says he is not just looking to enter new product categories, but could also be eyeing a public listing in the next couple of years.

But given the slow start of the personal care products launched subsequently, will Patel be able to sustain the company’s 20 percent year-on-year growth?

I used to look for opportunities from head to toe, that’s where I got ideas for most of these products,” says Patel, the 57-year-old chairman and managing director of Vini Cosmetics, as he explains his knack for addressing the unmet needs of customers. “With Krack, I learnt the art of understanding the needs of consumers and how to position a product.”

Patel had joined Ahmedabad-based Paras Pharmaceuticals, his family business, as a 23-year-old in 1985, and spent the next seven years understanding products, markets and marketing. The company launched Krack, focussed on cracked heels, in 1993 and gave Patel his first taste of success. He followed that up with a string of similar successes, with products such as Itch Guard, Ring Guard, Dermi Cool, D-Cold, Livon and Set Wet.

However, in 2006, following differences with his brothers, Patel sold his 24 percent stake in Paras to Actis Capital for $43 million—the company was acquired by the Reckitt Benckiser Group for ₹3,260 crore in 2010—and launched Vini Cosmetics in 2007. “We started Vini by launching pharma products to help create a vast distribution network, but eventually withdrew them,” says Patel.

It was only after three years of market and consumer research that Patel launched his next, and perhaps his biggest, winner, Fogg—apparently an acronym for Friends of Good Guys/Girls—in December 2011. “For research, I go to consumers and ask them to name seven brands in a particular category. For deodorants, they would name 10 brands. So there was no place for me to enter,” recalls Patel. But the research also threw up other insights. “The biggest complaint for most deodorants was, ‘My can is getting over fast’. So we started looking into it to see if we could find a mechanism to fix the issue. This is how we found our USP: A deodorant without gas.”

Armed with this new product, Patel entered the ₹1,054-crore deodorant market in 2011, crowded with brands such as Park Avenue, Set Wet, Wild Stone etc, and the muscle of multinational heavyweights like Hindustan Unilever. By 2013, Fogg had emerged as the market leader in the deodorant category despite the struggle to convince customers that “the bottles were smaller because there was no gas in them”, says Patel.

But Fogg’s searing popularity and visibility among consumers happened with the switch in its marketing strategy in 2015. At a time when most deodorants used marketing tactics to position their product as the one that women would find attractive, Patel decided to go with the iconic catchline ‘Kya chal raha hai? Fogg chal raha hai’.

“India is a very different country, culturally. More than 90 percent of our households have a single TV set. I wanted my advertising to be watched by a family, instead of making someone look away when the commercial is playing,” he says. Backing up the ad campaign was a robust countrywide distribution network. Patel claims Fogg now has 18 percent of the ₹3,047 crore deodorant  market and contributes to most of the company’s topline. The brand’s net worth, he adds, would be close to $100 million. “Marketing is a science. If you adhere to the science, you’ll be able to find out means and ways to survive [in the market],” he says.

Other products in Vini’s portfolio that are yet to match up to Fogg’s popularity are White Tone, a face powder, Glam Up, a moisturiser, and Ossum, a perfume. Patel believes all of these will catch on, albeit slowly. “Face powder had gone out of fashion, with people migrating to creams. We wanted consumers to go back to using powder, since creams can get sticky and oily in India’s hot and humid climate,” Patel explains. “Ossum is at the walking stage, Glam Up is at the crawling stage and White Tone is at the running stage. Fogg is supersonic.” White Tone contributes about ₹150 crore to the revenues. 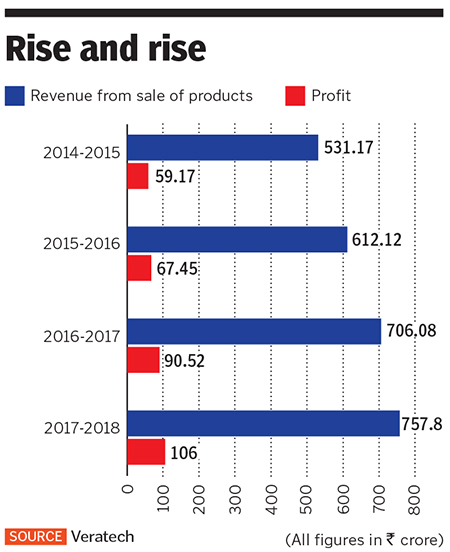 According to Abneesh Roy, executive vice president at Edelweiss Financial Services, Fogg has been a success because, “within the deodorant market, they were differentiated, and captured that entire market with an extremely high advertising spend, which then made them a category leader. However, they have not been as successful with any of the other categories.” He adds that one of the reasons why Vini is not as strong in any of the other categories is because the rival companies are pumping in just as much money, if not more, as Vini into advertising.

This is borne out by the fact that despite the new launches from Vini, Fogg continues to remain its money-maker. “Fogg will be a mega brand like Colgate, it will be a second name for deodorants,” says Patel. Currently, Fogg is available in 36 variants, and is sold in 65 countries, with the company expanding to other South and Southeast Asian countries, to the Middle East, East and West Africa. “Five years ago, we were the only company in the deodorant category to move out of India to 60 countries, others are moving out only now. This is a product that can have a meaningful impact in any part of the world.”

Vini Cosmetics has so far received total investments of ₹1,210 crore over three rounds of funding from investors including Sequoia and WestBridge Capital; the Patels retain a 64 percent stake in the company. And although it was in talks with investors for another round of funding, Patel now says there will be “no funding for the next four months; I might go directly for an IPO in 2021”.

The infusion of funds, he says, would be to take the company’s topline to ₹2,000 crore, and enter three new product categories in the next few years. “As of now we are into personal care products, but we can also move into pure hygiene or even home care products. We will have to, if we wish to become a multi-brand company,” he says.

Roy, however, believes that the beauty and personal care space is currently the right market for Vini. “The sector is growing rapidly, but Vini needs to target its male consumers as well, especially for its other product categories.” Given the slowdown that most FMCG companies are now facing, he adds a note of caution: “Innovation is necessary and diversification will be the key.”