A delectable tale of culinary success

Awardee of most celebrated chef in 2016 and featured among the Middle East's Top 50 F&B hoteliers. Also, he was awarded the Young Entrepreneur of the Year 2019 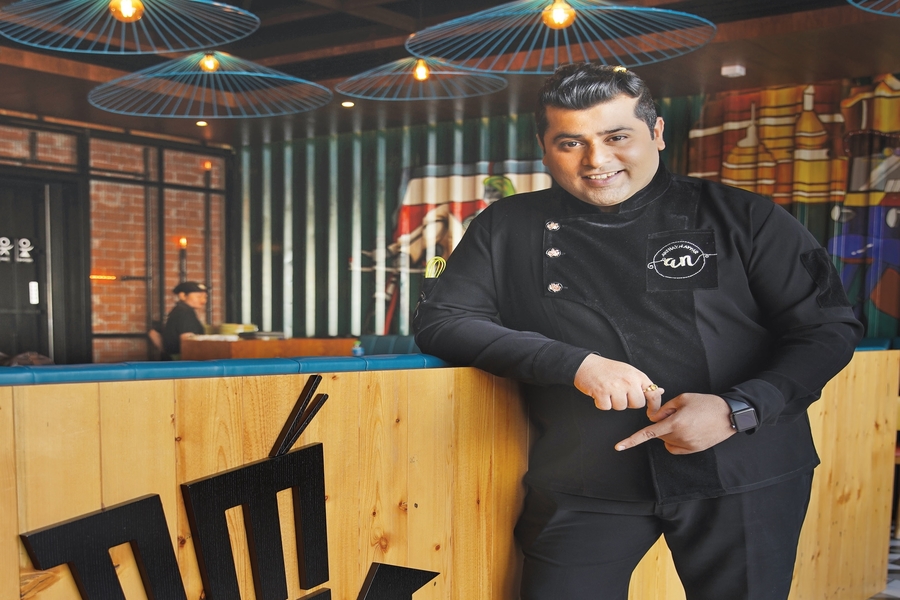 It all started in 2009 when a boy from Delhi, who had grown up exploring food, set out to seek his fortunes as a chef. Life was not easy; he started working part-time at the age of 14, when his father had a cardiac arrest. In fact, he had to sponsor his education through a loan from a bank. However, his tryst with the culinary arts began when he filled the position of sous chef at a well-known resort at the foothills of the Himalayas. When guests requested a taste of the local cuisine, he realized that beyond a few modern local delights, they were unable to dish up truly traditional fare. This led him on a bag-packing food research expedition that took him from Rishikesh to Haldwani and various other parts of Uttarakhand – from east Kumaon to the west of Garhwal. With no hotel bookings or tickets, he travelled close to 50 kms a day, with a physical map as his only constant companion. This young and energetic chef - Akshay Nayyar - has come a long way since. “My journey from making Maggi noodles to learning several cuisines of the world has been challenging,” he admits. However, never deterred by trials that came his way, he went on to carve a name for himself in the world of culinary arts. At the age of 25, he was the youngest executive chef in a 5-star hotel in the UAE. He has also had the privilege of being mentored by master chefs like Sanjeev Kapoor and Marco Pierre White. Today, he is a celebrity chef, TV host, author of a cookbook and an entrepreneur, who set up a fast-expanding chain of specialty restaurants on the domestic and international hospitality landscape. Amongst the feathers in Akshay Nayyar’s toque blanche (chef cap), have been the privilege of hosting the Honorable Prime Minister of India, Shri Narendra Modi, and the crown prince of Abu Dhabi, H.H Sheikh Mohammed bin Zayed Al Nahyan, in U.A.E. He has also been the anchor of the Middle East’s biggest reality food show “Foodshala” for the past 8 years, endorsing over 20 prominent FMCG brands including Knorr, Rainbow, Sadia, Jif, Bayara, Masafi, Geant, Yoplait, Al Ain Farms, Oasis, Shan Spices, to name a few. Other achievements of this celebrity chef include being the face of the popular TV Series Chef’s Rasoi, aired on the Food Food channel and the Master of Ceremony at the “Khichdi” event that earned a Guinness World Record at World Food India 2017, for cooking 918 kgs of khichdi. With great success as a restaurateur, his concepts have been expanding in Asia, the Middle East and are coming soon to North America. Patrons can enjoy his cuisine at 100+ outlets, which specialise in Oriental, Modern European- Italian, Mexican, Modern Indian and Arabic Cuisines, under the umbrellas of Tum Tum Asia- Dubai, Sol Foods catering, Kopper Kadai, Just Fired and Butter Wife, amongst others. In acknowledgement of his passion and talent, he was adjudged the Most Celebrated Chef in 2016, by the Government of India, and featured among the Middle East’s Top 50 F&B hoteliers. He has been bestowed with many other awards along the way, including Winner - Young Entrepreneur of the Year 2019, North India; Winner- Entrepreneur of the Year 2018 by International Excellence Awards, Thailand; Winner- Chef of the Year by Delhi Now Magazine, 2018; Chef of the Year in 2018 by Food Food awards; Winner Top 100 Masterpiece at Zoom Delhi in 2018-2019 and Winner- Entrepreneur of the Year 2017 by Hospitality Awards, Dubai. He has also received prestigious recognition as Winner- Indian Restaurant Awards 2017, under the Best Regional Indian Cuisine (Restaurant in North) category for Kopper Kadai, Delhi and his restaurant Tum Tum Asia won Best Restaurant Award at the Dubai Food Festival 2018. Disclaimer: The views, suggestions and opinions expressed here are the sole responsibility of the experts. No Forbes India journalist was involved in the writing and production of this article.