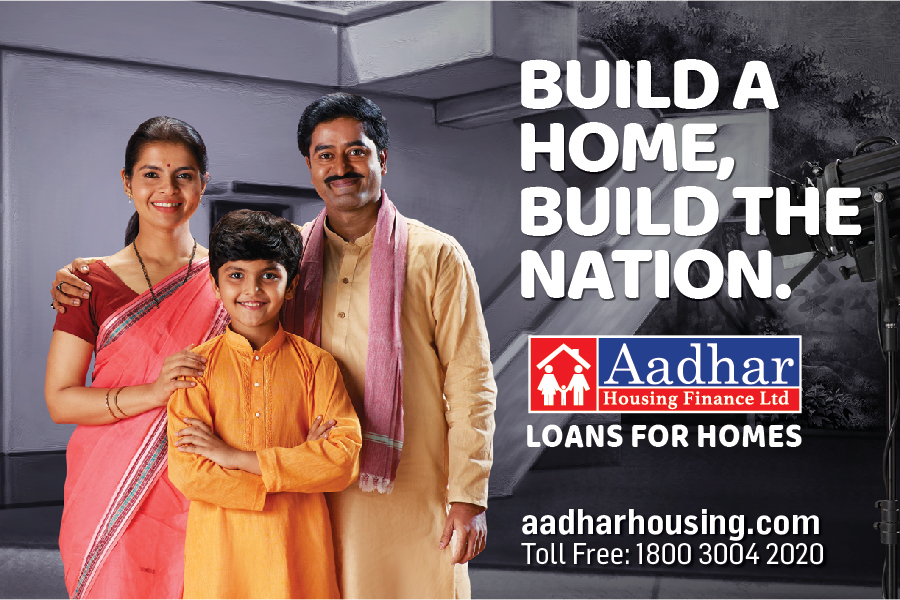 One of the largest housing finance companies in the affordable housing space in India, Aadhar Housing Finance Ltd.(Aadhar) has launched its new brand campaign #gharbanegatohdeshbanega, which advocates its vision of enabling home ownership for every Indian across the nation.
Aligned with the government’s initiative of “Housing for All by 2022”, Aadhar Housing Finance’s core strategy entails facilitation of financial inclusion through a wider outspread. Committed to serving home buyers from the low income group of the economy, the company seeks to offer better access to customer centric solutions and simultaneously provide the benefit of Pradhan Mantri Awaas Yojana(PMAY) to the eligible.

Strategy for Outreach
Apart from establishing a nation-wide network, Aadhar has adopted an innovative approach of a Hub and Spoke model to reach people beyond tier 1, 2 and 3 cities. In the near future, the company plans to increase its spoke locations from the current 1500 to 2500, which will be serviced by a nearby operative branch and a Resident Executives (RE), who will be responsible for sourcing new business and providing quality customer service. The REs will develop their own sourcing channel – called ‘Aadhar Mitra’ - by appointing unemployed youth, local financial dealers, building material suppliers, hardware and paint stores, kirana shops, builders and developers etc. in the vicinity.

Vision of Inclusion
Explaining the company’s mission, Deo Shankar Tripathi, MD & CEO, Aadhar Housing Finance says, “Our objective is to broaden the net of financial and economic inclusion by providing a sense of security and ultimately creating customer delight.” He elaborates further, “At the core of Aadhar Housing Finance is the mission to empower people who have always dreamt of owning a house but don’t have sufficient means to achieve it. If you’re helping individuals build a house of their own, you’re building their lives but when you help millions to build homes, you’re helping build the nation and that is something Aadhar Housing wanted to communicate as a brand that is driving transformation across India.”

Campaign Contours
With this mission at the heart of its operations, Aadhar Housing has recently launched a brand campaign, #gharbanegatohdeshbanega, which advocates Aadhar Housing’s vision of enabling home ownership for every Indian across the nation. Crafted using the insight that the prosperity of a nation depends on the prosperity of its people, this digital campaign is led by a multilingual brand film that drives awareness about the importance of owning a home.

Striking a chord
Using a catchy musical with touching visuals, the brand film captures the joy that families experience when they own a home. The message that comes across loud and clear is that a house offers comfort and security. The film beautifully brings out the sentimental value that accrues from owning a home through the lyrics of the song, which convey Aadhar’s focus on enabling home ownership for all to create an equitable society and a better nation.

The campaign appeals to the common Indian dream of being a home-owner. It builds on the Indian mind-set that owning a house is an indicator of financial wellbeing, prosperity and economic security and implicitly proposes housing for all through accessible financial inclusion across India. This vision manifests in the recent campaign, aptly titled as “Ghar Banega, Toh Desh Banega.”

Multi-media approach
Beyond the digital ad film, the campaign is being rolled out across media channels, including social media, print and outdoor in the cities of Mumbai, Delhi, Noida, Gurgaon, Ahmedabad, Surat, Chennai and Hyderabad.