This financier gave up his job to work in a pay-as-you-wish café. His ultimate aim: To shut down the ‘generosity enterprise’ 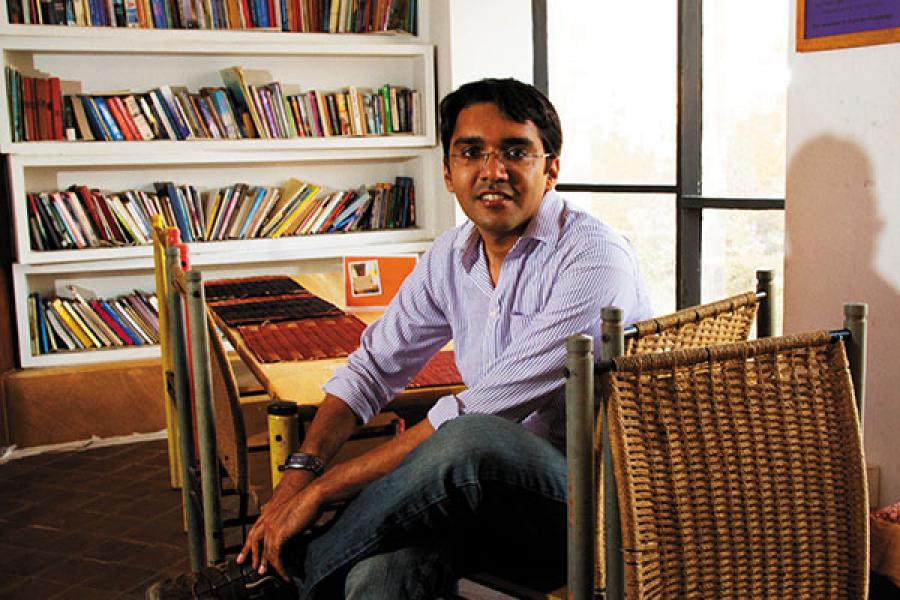 The milieu at Shantivan, a garden in Mumbai’s tony Malabar Hill area, on February 17 was like a hangover from Valentine’s Day. Placards displaying messages like ‘Love is all we need’ were tied to tree branches and hearts were chalked with bounty throughout the green sprawl. Except that it wasn’t an ode to Cupid. The occasion was the second monthly lunch hosted by Seva Café.

Omnipresent at the venue was a bespectacled man in khadi kurta-pyjama. He, along with other volunteers, was welcoming the guests and explaining the concept of the café—here, patrons aren’t charged for the food they’re served, instead they are free to pay whatever they want. Or, they can walk out without shelling out a single penny.

Meet Siddharth Sthalekar, who was orchestrating this “generosity enterprise” with ease. About three years ago, he was the co-head of the derivatives trading desk and the head of algorithmic trading at Edelweiss Capital. A typical day for this financier then would begin when the gong woke up Dalal Street at 9 am. That was when he would appear on CNBC, dressed in a crisp, formal shirt and tie, and share his expertise on accumulating stocks.

On one such morning in 2010, even as he was offering investors advice on what stocks to buy and sell, Sthelekar had the hint of a smile on his face. So much so that the cameraman asked him what’s brewing. Little could he explain to him then that the decision that he had taken—to throw it all away—had lit up his poker face that morning.

For some time, the 31-year-old Mumbaikar had been contemplating quitting his cushy job to explore if there is an alternative to the premise of accumulation that seemed to drive individuals in the corporate world. When he finally took the plunge, he set out to travel across India with his wife Lahar, a freelancing interior designer who graduated from the Center for Environmental Planning and Technology (CEPT) in Ahmedabad. Over the next six months, as they visited several non-profit organisations, they woke up to the concept of gift economy where goods and services are extended without any formal quid pro quo. This motto formed the cornerstone of Moved by Love, an incubator at Gandhi Ashram in Ahmedabad, which carries out various projects.

One such project, Seva Café, was in hibernation. Sthalekar, an IIM Ahmedabad graduate, and his wife became its core volunteers and helped reopen it in September 2011. Seva Café practises giving, the antithesis to accumulation. At the café, volunteers cook and serve meals every week from Thursday to Sunday for free.

What is Sthalekar’s takeaway from the experiment? The proof that customers have kept the café running by paying up even when they could have got away without it. That there are enough people not governed by greed—something he had set out to test in the first place.

However, Sthalekar admits that the transition in his mind from market to trust economy did not occur overnight. “Initially, I used to put price tags on customers as they walked into the café,” he says. That’s in tune with the rationale of profit maximisation that business schools teach and the corporate world practises. So, Sthalekar often spent more time at the table of a potential Mr 3,000 compared to the table of a tea-stall owner, who was in his perception Mr 100. Then, his “noble friends”, including his wife and other volunteers, stepped in and pointed out the flaw in his approach, prompting a course correction.

However, running the café till eternity is not the objective of this entrepreneur. In fact, it’s quite on the contrary. Sthalekar says the ultimate aim of this gift-economy project is to shut it down. “If the aim was to keep the café open forever, we would have gone with a presentation to the Bill Gates Foundation and asked for a corpus.”

The idea, he says, is to trust the assumption that every individual, irrespective of his economic standing, can be generous.  Seva Café provides a space for people to practice generosity by recognising the selfless giving of the volunteers. But, in the long term, Sthalekar hopes that people will develop the habit of being generous even outside the café—in all environments and circumstances. When this would happen, Sthalekar would lock the doors of Seva Café and put the sign ‘Mission Accomplished’ on it. “When there will be enough generosity in the world, there would be no need for the café,” he says. 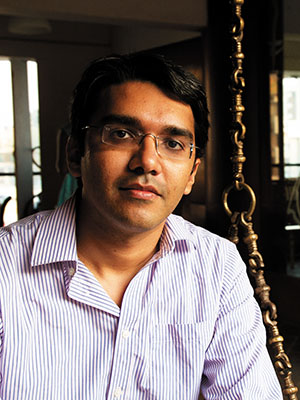 Image: Alok Brahmbhatt for Forbes India
In the beginning, Sthalekar confesses, he could not fathom the motive of gift-economy projects
Although Sthalekar doesn’t know when this will happen, he says he is optimistic as he is coming in touch with more and more people who are generous. The other situation in which the café would close, he says, is if it does not receive enough support from volunteers and/or customers. This has not happened for seven years, even from before he joined the project.

In the beginning, Sthalekar confesses, he could not fathom the motive of gift-economy projects. Given his background, it was a huge deviation from the aim of multiplying revenues manifold. He recollects that when he was at Edelweiss, he used to entertain clients with lavish dinners and alcohol at five-star hotels to extract the best deals from them. He doesn’t deny that he enjoyed the high life and his work per se, but instances like those made him question the morality beneath his work. “The contradiction of charging my corporate card for an expensive bottle of champagne when I knew there are hungry people on the street did not align with my values,” he says.

That led to a constant struggle in his conscience. At one level, he was carrying the stern face expected of a financier. But the realisation that the efficiency which money provides is skewed took him closer and closer to the decision of moving on. “It was brewing inside me,” he says. He found moral support from some unexpected quarters—his boss at Edelweiss. When he told him that he would quit, his seemingly-capitalist boss opened up to him about a secret desire that he nurtures in his heart: He wanted to build an ashram for old people. This reaffirmed his conviction that people are generous by nature, but they act in correspondence with the space they are in.

There are days when he has his doubts about the choices he has made. “On some days, I do feel ‘what I am doing here, travelling on a train when my friend owns a BMW?’” he says. Nevertheless, his experiment of living on people’s generosity affirms to him that it is possible to sustain oneself by giving. “The litmus test of this experiment is that if I create value for the society, the society will support me,” he says.

Even though Sthalekar’s ultimate dream is to shut down the café, for now, he wants to open more Seva Cafés across the country.  It pops up once a month in Pune and Bangalore. In January, he decided to try his luck in Mumbai. He was apprehensive, unsure of how the financial capital would react to a pursuit completely non-material. “We decided it would be a one-off experiment. But because the response was overwhelming, we served Mumbai in Feburary too and are scheduled to hold another gathering in late-March,” he says.

On both occasions, Seva Café served about 100 guests comprising an eclectic background—from professionals to slum children. Although they had anticipated serving about 60-70 patrons, the participation of a dozen-plus volunteers from the city came as a bonus and helped them enhance the scale of hospitality by a notch.

However, for Sthalekar, opening more cafés is just the means to the end: The day when people will make giving a way of life and these spaces will become redundant. It is hard to believe that the images of Sthalekar Google juxtaposes are of the same person: One clad in a loose khadi kurta, sporting a French beard and wearing a hearty smile; the other a snapshot of him in the CNBC show. Ask him and he’ll tell you that maybe they aren’t the same person. Today, if Siddarth Sthalekar were to appear on the CNBC show, he would advise investors to give all their stocks away.

As a freelance writer, Smita Pranav Kothari writes across genres and subjects. She pursued Masters in Journalism from Harvard and is now based in India.