A study carried out by global management consultancy Hay Group reveals that the difference in salaries between the core team (CEOs/MDs) and enablers (department heads and chiefs of business groups) is narrowing in India. It is now two times, down from about 3.5 times in 2012. “These are the trends seen across all industries,” says Hemant Upadhyay, managing consultant of Hay Group India. The report is based on the analysis of 2,610 jobs across 205 organisations from June 2014 to December 2014. “Earlier, we would typically see compensation in the form of an overseas trip or visits to a key factory. But now they are monetising the benefits,” says Upadhyay. 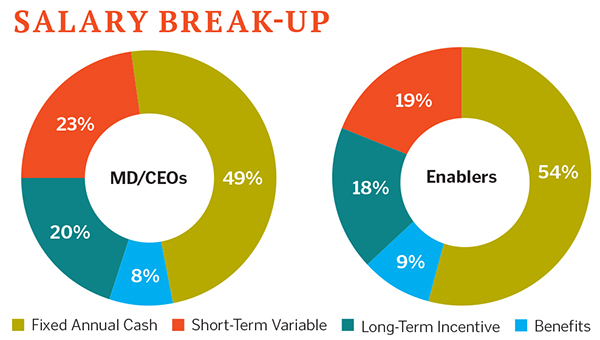 The report showed that the variable portion in the salaries of top executives was going up, from 25-28 percent to 30-40 percent.

The study also said that the compensation of CEOs and MDs in India is expected to show a flattish growth of 10.2 percent in the fiscal year ending March 2015. Top executives are likely to see a 10.5 percent rise in pay in the twelve months up to March 2015.

Tweets by @forbesindia
Can Bvlgari succeed in India in its second coming?
India ranks last but one at protecting intellectual property