Fisherwoman and Tuk Tuk, a 15-minute animation film by Suresh Eriyat, has won a National Award this year and is also making waves overseas 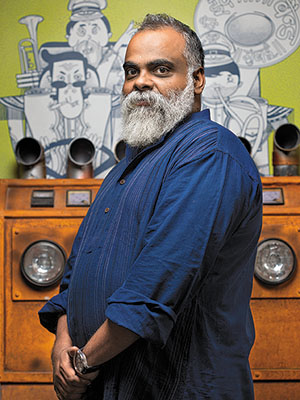 A halt at a traffic signal in Mumbai many years ago resulted in an idea that has brought national and international glory to Suresh Eriyat, 42, founder and creative director of ad-film production company Studio Eeksaurus. Eriyat was driving to Famous Studios in Mahalaxmi, Mumbai when he saw a group of fisherwomen; he considered their confident stance, and wondered whether they would have pursued a different profession had their socio-economic situation been different. His curiosity inspired the animation film Fisherwoman and Tuk Tuk (FTT), the story of a middle-aged fisherwoman who dreams of owning an autorickshaw.

The 15-minute film won the National Award for the Best Animation Film this year. Since March 2015, FTT has been screened at over 31 film festivals and won more than 12 awards, including the Award of Excellence at the Tokyo Anime Award Festival in 2016. “Winning the National Award was a pleasant surprise,” says Eriyat, a graduate from the National Institute of Design.

In his 10-year stint with the animation division of Famous Studios, Kochi-born Eriyat was instrumental in making the memorable Amaron Battery and ICICI Chintamani campaigns. In 2009, he founded Studio Eeksaurus, which created FTT. “In India, animation is largely perceived as a technical skill than a medium of storytelling. Our aim was to prove that we don’t just do the back-end work; we can also do a story,” Eriyat tells Forbes India.

FTT does not conform to the norms of animation films like having “lovable characters”. “My protagonist [in FTT] is outright brash and manly looking,” quips Eriyat.

The accolades may be pouring in, but making the film wasn’t a cakewalk for Eriyat, the recipient of over 100 awards. He began pre-production work on FTT in 2009, but his team at Eeksaurus left the project midway because they didn’t believe in it. Not one to give up easily, he restarted work with a new 10-member team and completed the film in February 2015.

His success will prove to be an impetus for India’s animation industry, which generated revenues of Rs 5,110 crore in 2015, a growth of 13.8 percent over the previous year, according to a Ficci-KPMG report.

But Eriyat says there is still room for improvement. “Firstly, most of our writers think live action when they write animation. Then, there are no funds for animated films in India. Thirdly, there isn’t an established revenue model,” he points out.

The filmmaker, however, is hopeful that the raw, unrefined talent in India will script a turnaround. He has himself led from the front with his animation film Fateline, produced for the Rotary International in collaboration with J Walter Thompson (JWT) Kolkata, winning the Annecy Cristal Award in the Commissioned Film category at the Annecy International Animation Film Festival in 2015. “It was fantastic working with Suresh. His enthusiasm and creativity took the film to the next level,” says Raji Ramaswamy, senior vice president and managing partner, JWT Kolkata.

Eriyat isn’t done yet. His upcoming projects include a 12-minute clay-animation film called Tokri, which is likely to release by 2016-end, and a full-length thriller. With these, he wishes to change the perception of animation as a ‘kids-only’ genre. His record suggests he might be readying himself for some animated celebrations.