Blue diamonds are white-hot at auction 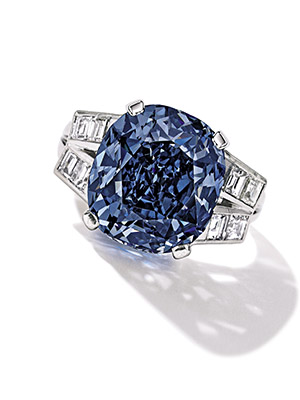 Blue diamonds are extraordinarily rare, but the records they set at auction are not.

In November 2015, the Blue Moon diamond—a 12-carat Internally Flawless Fancy Vivid Blue gem—shattered a sales record when it was hammered down at Sotheby’s in Geneva for $48.5 million. And in early April, a 10-carat blue diamond with the pedestrian name De Beers Millennium Jewel 4 set an auction record for Asia, selling at Sotheby’s Hong Kong for $31.8 million.

The Blue Moon could be eclipsed on May 18, when Christie’s in Geneva puts forth the largest blue diamond ever auctioned: The Oppenheimer Blue, a 14.62-carat Fancy Vivid Blue diamond with a pre-sale estimate of $38 million to $45 million. Loose stones aren’t the only things ringing up millions; rings do as well. On April 19, Sotheby’s auctioned a 9.54-carat blue diamond ring (above) that once belonged to Shirley Temple. The piece, a gift from her father when she appeared in The Blue Bird at 12, is expected to sell for $25 million to $35 million—or roughly the cost of 10 million Shirley Temple cocktails.

$32 bln: India’s net gems and jewellery exports in 2015-16, down from $36.2 billion the previous year, according to the Gem & Jewellery Export Promotion Council