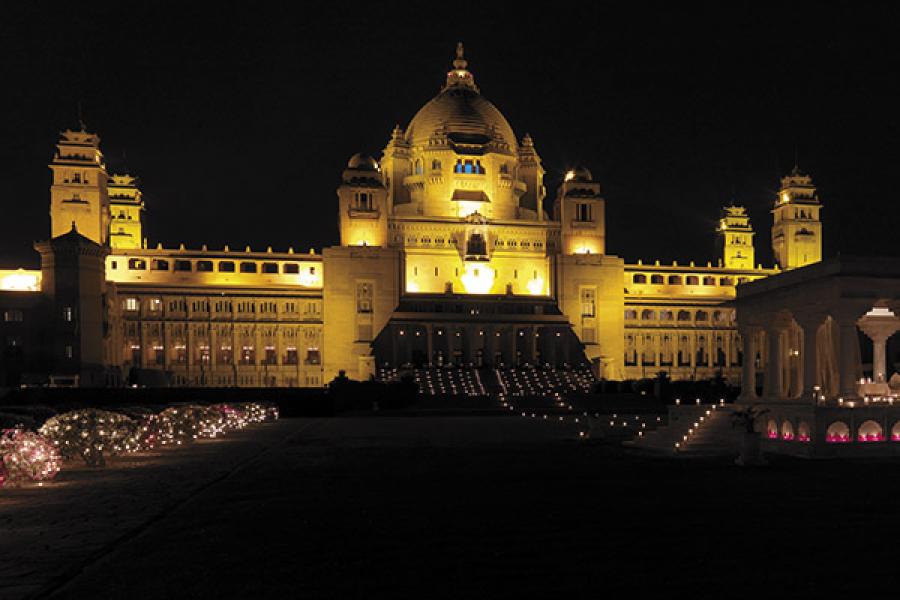 On January 22, a small ceremony was underway on the grounds of the Umaid Bhawan Palace in Jodhpur to celebrate its top rank on TripAdvisor’s Travelers’ Choice awards. The Jodhpur royal palace unseated the Gili Lankanfushi Maldives resort for the top spot. Although Gaj Singh, the erstwhile Maharaja of Marwar-Jodhpur, for whom a section of the palace still serves as a residence, owns the property, the hotel is managed by Taj Hotels, Resorts and Palaces.

The Travelers’ Choice awards featured 113 Indian hotels on the list. The Oberoi Vanyavilas, Sawai Madhopur, and the Taj Rambagh Palace, Jaipur, were at rank 6 and 15 respectively in the luxury category. The Bougainvillea Guest House in Goa featured at rank 23 in the bargain category. With 58, Rajasthan topped the list of the most number of awardees from a state.

Best known for hosting glamorous celebrity nuptials, Umaid Bhawan Palace, with its 64 rooms, was built between 1928 and 1943. It was perhaps the last great palace to be built in India. The architect, Henry Vaughan Lanchester, designed the hotel in the art-deco style, but also included stylistic elements inspired by the Angkor Wat temple in Cambodia.

The transition from a royal home to a hotel came shortly after the privy purses of the Indian princely states were abolished in 1971. “We formed the company in 1972. Then, we ran it ourselves as a guest house and developed it gradually,” said Singh.

Umaid Bhawan Palace’s general manager Vincent Ramos believes that what sets the hotel apart, along with the “royalty factor”, are the people. A large number of the hotel’s 350-strong staff are third generation employees of the erstwhile Maharaja. He added, “When I first arrived here, I said: ‘I’ve come to this hotel’. But Bapji (Singh) corrected me saying, ‘No, you have arrived at the palace’.”

The TripAdvisor Travelers’ Choice awards, now in their 14th year, are particularly significant because of the methodology used to rank the hotels. “For a 12-month period, we take into account the opinions and reviews that have come in for all the hotels and an algorithm determines the rankings,” says Nikhil Ganju, country manager, TripAdvisor India. The list that is divided into six categories—top hotels, luxury, best service, bargain, B&Bs and inns, and small hotels—included 7,028 hotels, globally, this year.