Once dismissed as a hidebound has-been, Microsoft is flying high. CEO Satya Nadella's secret: A cultural reset that has lowered the gates to the software maker's fortress—and cloud, cloud, cloud 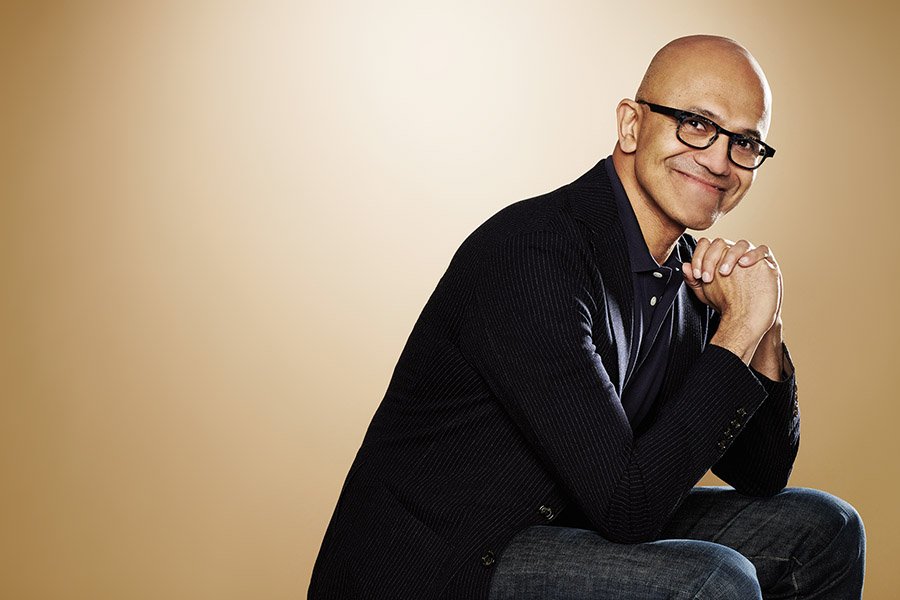 In early 2016, two years into running Microsoft, CEO Satya Nadella needed advice from one of his newest employees, the co-founder of an app-tool maker Micro­soft had just bought. Nadella was close to pulling off his blockbuster $27 billion acquisition of ­Linked­In, but he wanted to talk about another company he coveted: GitHub. “Can we do it?” Nadella asked the executive. “Have we earned the trust?”

Back then, the answer was no. GitHub is the virtual watercooler of software development, a site where millions of programmers talk shop and share code across company boundaries. Microsoft had earned a reputation during its 1990s heyday as its polar opposite, an insular software belligerent, and GitHub was seen as wanting nothing to do with it. But after watching Nadella lead the Redmond, Washington-based giant for two years, GitHub made a surprise move, choosing Microsoft over Google as its acquirer this past June.

It was the latest coup for Nadella, 51, who’s breaking free of Microsoft’s recent past by returning it to its roots under co-founder Bill Gates.

“Bill used to teach me, ‘Every dollar we make, there’s got to be five dollars, 10 dollars on the outside,’” Nadella tells Forbes, in his first sit-down interview since the $7.5 billion deal closed.

Great companies were once built on Microsoft’s code, Nadella says he was reminded by Gates. Nadella’s mission: Rebuild Microsoft brick by brick until it can happen again. “That’s what I want us to rediscover,” he says.

Signs of Nadella’s progress are found everywhere. From a Microsoft voice assistant that integrates with Amazon’s Alexa to a deepening alliance with Samsung and, most crucially, in its financial statements. Revenue, at $110 billion, is growing at a double-digit percentage after slumping for most of the past decade, in large part because of the hard-charging—and high-margin—cloud suite the company has built around Office and Azure, Microsoft’s challenger to Amazon’s cloud juggernaut. Net profits are at $16.6 billion, an increasing share of which is attributable to Azure, which is growing at 91 percent annually with multi-year contracts only just starting to boost the bottom line. Microsoft ended November as the most valuable company in the world, eclipsing Apple and Amazon. The consensus among analysts is that it will hit $1 trillion in market cap sometime next year.

Much of the credit belongs to ­Nadella, a Microsoft near-lifer who took the reins from Steve Ballmer in 2014 and immediately started knocking down walls. The former engineer says he has focussed the company around a simple concept: “Equitable growth”.

“People are finally coming around to saying, ‘It’s not just the surplus you’ve ­created for yourself. What’s the state of the world around you?,’” Nadella says. “That’s where I feel like we’re at our best.”

Nadella signaled his intentions with the help of an iPhone. Weeks after his start as CEO, Microsoft opened up its Azure cloud service to make it easier for developers to create iOS apps. The following year, Nadella used an iPhone onstage at an event—unthinkable for a company that had brewed up the market-lagging Windows phone in 2010 and then blew more than $7 billion in 2014 buying Nokia’s mobile division to support it. When Nadella took over, he wrote off the whole deal as a loss.

CEO Nadella is returning to a core Bill Gates lesson: “Every dollar we make, there’s got to be five dollars, 10 dollars on the outside.”


Behind the scenes, Nadella got to work on Microsoft’s culture of infighting and of treating competitors as if it were “straight-up war”, as a former Oracle exec puts it. With its rearward-facing obsession with Windows, the cash-cow operating system, Microsoft was caught unawares by the cloud boom (exemplified by Amazon Web Ser­vices) and by subscription software businesses like Salesforce.

Nadella, who immigrated to America from India in 1988, was an insider who led the company’s nascent cloud business before taking the top job. He quickly installed new leaders and smashed the barriers between Microsoft and open-source rival Linux, which had been famously called a “cancer” by his pugnacious predecessor Steve Ballmer. Nadella and Scott Guthrie, the new cloud boss, welcomed Linux onto Azure’s IT framework, where it’s now used by half of all computer systems operating on Microsoft’s cloud. “When we achieved our success, with that success came out the classic hubris that I describe as being the know-it-alls,” Nadella says. “I said, ‘Let’s shed that.’”

To chip away at Amazon’s massive head start in cloud (Amazon Web Services is on track to make $27 billion in revenue a year, compared with an estimated pace of $10 billion for Microsoft’s Azure and $3 billion for Google), Microsoft turned to its partners. Sales reps are now compensated when a deal with a key ally of Microsoft leads to more activity on Microsoft’s cloud. And companies working with Azure find themselves brought into million-dollar deals at the one-yard line. “All of us have been stunned they are doing it,” says Bob Muglia, CEO of San Mateo-based data-warehouse software maker Snowflake and a 23-year Microsoft veteran, who left in the Ballmer years. “Satya’s recognised this is a service-oriented world.”

But there are asterisks attached to this new exuberance. Much of Microsoft’s success has come from moving existing customers onto its cloud services and its revamped Office 365 work software suite, raising concerns that the company is simply harvesting low-hanging fruit, says Dan Ives, an analyst at the Los Angeles investment firm Wedbush. And while the breadth of Microsoft’s portfolio, which also includes gaming, search and devices like Surface tablets, is a great strength, it could still get tripped up again by success. “The risk is they go back to the old days,” says Raimo Lenschow, an analyst at Barclays. (Both are bullish on the stock.)

Now with GitHub in the fold—following acquisitions of the maker of Minecraft ($2.5 billion, 2014), app-building-tool provider Xamarin (reported as $400 million, 2016) and LinkedIn—Nadella’s team needs to avoid falling into bad habits such as restrictive long-term contracts. How the company integrates all these purchases—and history suggests it will be difficult—will also test Nadella. To navigate these chal­lenges, Nadella relies on his broader vision that happier employees, customer and partners—even prickly coders—have to do well for Microsoft’s business to flourish as well. “A successful product is one that fosters more success around it,” Nadella says.

To pull it off, Nadella will need to lean on new leaders like Nat Friedman, the Xamarin co-founder whom Nadella asked about GitHub in 2016 and then tapped to run the business for Microsoft once the deal closed. As Friedman, whose new job entails evangelising that message to GitHub’s 31 million developers, puts it: “People are giving Microsoft the benefit of the doubt.”