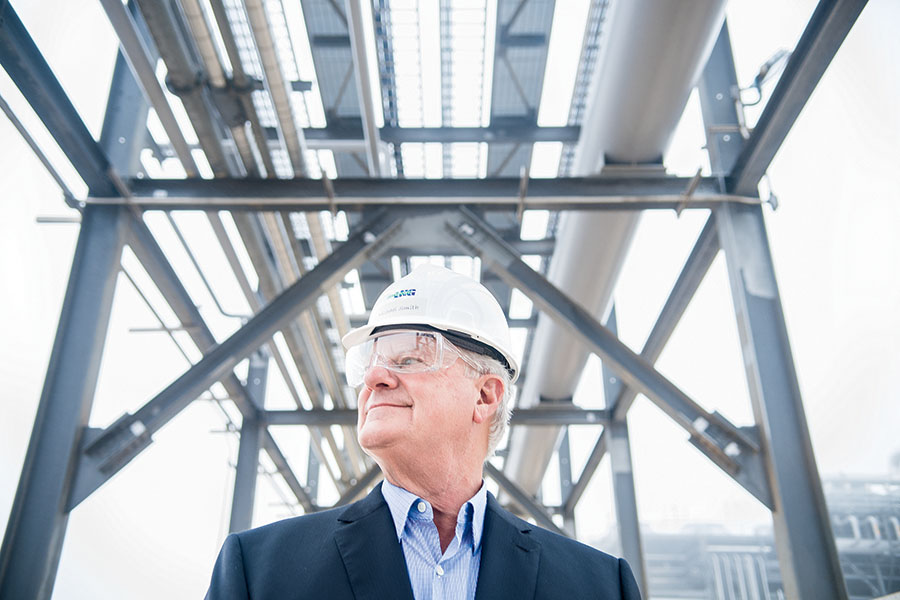 Michael Smith at his massive LNG operation on Quintana Island, Texas, which is now shipping out more than 2 percent of the United States’ natural gas production. “It’s my baby,” he says
Image: Matthew Mahon for Forbes

Quintana Island is a seven-mile speck of land off Freeport, Texas. Over the past 200 years, the island has been home to a Mexican fort, then a busy seaport for early Texas farmers, who shipped out cotton. In 1900 came the Great Galveston Hurricane, which killed 11,000 in the immediate vicinity and wiped Quintana clean. By the time Michael S Smith set foot on the island in 2002, it was languishing. “We’d be sinking in the mud if we were standing here then,” Smith says.

Smith has made his own historic mark on the island. Having spent $14 billion, he now owns a controlling interest in Freeport LNG, which chills and exports 2 billion cubic feet of natural gas per day, most of it so-called shale gas, horizontally drilled, hydraulically fracked. At current market prices that daily output is worth some $14 million, on which Freeport collects about $5 million a day in tolling revenue. “We are taking clean American natural gas, adding tremendous value and exporting it to countries that do not have enough energy and would otherwise be burning dirty coal,” he says.

Since becoming operational in September 2019, Freeport LNG has loaded 200 cargoes destined for Japan, South Korea and Croatia, where a single shipment can meet the annual energy needs of tens of thousands. Freeport will export about 15 million tonnes of LNG this year and is on track to book nearly $2.5 billion in revenue. Smith’s 63 percent ownership in the limited partnership is worth in excess of $1 billion.

Liquefying gas involves chilling methane down into a minus-260-degree liquid that can be pumped into thermos-bottle tankers and then shipped around the world. To do so economically, Freeport LNG has erected some of the world’s biggest LNG machines, called “trains.” It started by hammering 36,000 pilings 100 feet into mushy Quintana ground. Atop that now stands enough steel to build six Eiffel Towers and 192 miles of gleaming pipe, all anchored in 496,000 tons of concrete. All this was built not by some multinational energy giant but by one individual: the stubborn, Bronx-born Smith.

He admits he initially got his bet wrong. Back in 2002, Smith’s strategy was not to export LNG, but to import it. He believed at the time that the US would soon run short of affordable supplies of domestic gas. Indeed, he first raised $800 million to build an import terminal that by 2008 was obsolete before it was even completed.

Having been the first mover in a failed strategy, though, put Smith in prime position to reverse course and export, rather than import, LNG. All he had to do was manage a few risks: Raising $14 billion, jumping through regulatory hoops and completing one of the world’s biggest construction projects. “Our capital costs were off by more than 2x,” he says. A decade later, thanks to the fracking revolution, the US now exports a record 10 billion cubic feet of gas per day, about one-tenth of domestic production.

Smith is a large man who at age 66 is still skiing and scuba diving despite some replacement joints. His father ran a business involved in turning garbage into fuel. Smith studied pre-med at Colorado State University, but in his senior year he “realised I was going to be a doctor for all the wrong reasons”. So he dropped out and became a Vail ski bum. Smith got his real estate license in Colorado in 1978, selling commercial properties out of Fort Collins. Vital to his later success was learning all the paperwork—deals, contracts, plans, permits. In the late 1970s, when oil prices spiked, he got into leasing land for drilling near where more experienced operators had just hit big wells. “When I started drilling wells, I would sit the wells myself,” he says. “I found out that I had the fundamentals to understand the technical side of the business.” Rather than pay engineers, Smith used a calculator, an HP 12c.

“I had eternal optimism,” he continues, “but I was always afraid there was so much I didn’t know.” Such as oil prices’ tendency toward volatility. When oil plunged in the late 1980s, Smith bought out his partner for little more than the assumption of liabilities. To save cash, he paid service providers Halliburton and Maverick Tube with interests in new wells. Smith took Basin Exploration public in 1992. Big finds grew elusive, so in 1995 he transformed Basin, sold the Rockies assets, cut staff and shifted operations to Houston to drill in the Gulf of Mexico. That got frustrating too, leaving Smith convinced that domestic supplies of natural gas were drying up. In 2000, he sold Basin for $410 million to Stone Energy, pocketing about $60 million.

Just 45, Smith had a fortune, but he wasn’t ready to hit the slopes full-time. In 2001, at the Brown Palace Hotel in Denver, he met Charif Souki, a former investment banker with a small gas company called Cheniere Energy. They both believed the United States would soon need to import gas. Souki had scoured the Gulf Coast for prime LNG locations and had options on three sites, including Freeport. Smith could have thrown in his lot with Souki, but he wanted to run his own show. He put up $14 million for 60 percent of the Freeport site.

Smith recouped his initial investment by getting big potential customers like Dow Chemical and ConocoPhillips to put down deposits and eventually sign 20-year contracts securing the right (but not the obligation) to turn LNG back into usable gas at Freeport. ConocoPhillips put up more than $500 million to build the import terminal, including insulated tanks big enough to stack Boeing 747s in.

By 2008, it was clear the boom in shale gas had made their import terminal dead on arrival. But thanks to those 20-year contracts, Freeport LNG was still making $25 million a year . . . for doing nothing. Says Smith: “We had built this facility, and it literally never got used.”

He therefore made a bet that it was more lucrative to reverse the flow and export America’s natural-gas bonanza. As Jason Feer, of the consultancy Poten & Partners, says, “These guys were quick to understand the value of these stranded assets just waiting for repurpose.” Smith again raised money by selling 20-year contracts for services to liquefy natural gas to BP and Japanese giants such as Osaka Gas and Jera. He also sold equity stakes in specific aspects of the project: The two Japanese companies put up
$1.25 billion to own 50 percent of train 1. Australian private equity firm IFM Investors injected $1.3 billion for 56 percent of train 2. In 2014, private equity giant GIP bought 25 percent of the limited partnership for $850 million. With solid backing, Smith’s team borrowed massive amounts.

By 2008, the boom in shale gas had made their import terminal dead on arrival

Most NIMBY conflicts were resolved when Freeport LNG bought and demolished some 60 homes on the island. The biggest frustration was Hurricane Harvey, which dumped two feet of rain in 2017 and ruined equipment. Finally, in late 2019, Freeport LNG was operational. “He built it. It’s finished. He has accomplished something remarkable and done a phenomenal job,” says Souki, a friendly rival, who in 2015 left Cheniere to start LNG developer Tellurian Energy. “Any kind of construction risk is out of the way. It’s the safest business model possible—just a tolling business impossible to replicate today.” Today Freeport LNG carries $13 billion in debt. With customers locked in to paying $2.5 billion a year for the next two decades, there will be enough to pay off debt, keep the machines running and make distributions to Smith and partners.

There are still headaches. No sooner had Freeport LNG gotten all three trains operational in early 2020 than Covid-19 lockdowns dashed global demand for gas. Summer LNG prices slumped to $3.40 per million BTU (British Thermal Units). This January, though, LNG shot up to a record $18.50 per million BTU in Asia, before falling again to $7. Such volatility could spur dealmaking. “That’s the impetus to signing  20-year supply deals—utilities in Japan have to make sure they have the gas they need,” says analyst Alex Munton, of energy consultancy Wood Mackenzie.

Smith already has approvals to add a fourth train and might use it to market premium, lower-carbon-footprint LNG. And because Freeport LNG gets all its electricity off the Texas power grid—which has benefited from a decade-long boom in wind power—he can sell his product as greener than LNG generated with gas-fired turbines.

The gas is greener, too. With plenty of coal left to displace, “our transition to renewables, no matter how fast we do it, is going to take a long time,” Smith says. “There’s still going to be a large role for natural gas.” He’s confident that the LNG market can grow 50 percent by 2030—and keep those ships docking at Quintana Island for decades to come.

Tweets by @forbesindia
Photo of the day: Weather - 1, Fans - 0
He warned Apple about the risks in China. Then they became reality