Building a cannabis company without betting on getting customers high

Billionaire Beau Wrigley is building his cannabis company, Parallel, to be bigger than his family's chewing gum business 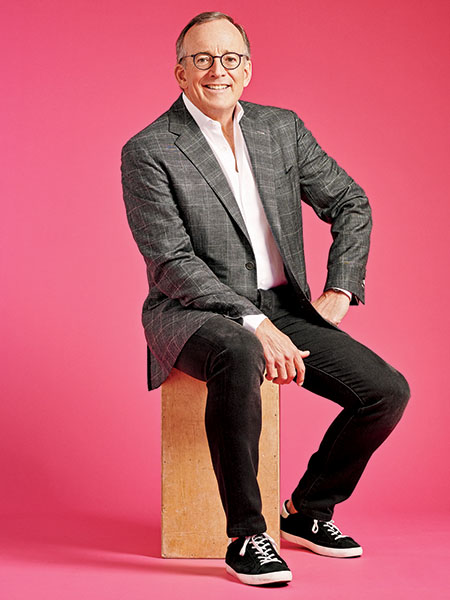 In 2017, when billionaire William “Beau” Wrigley Jr was pitched cannabis as a new investment opportunity by his family office’s managing director, Jay Holmes, he shut it down immediately. “Are you kidding me?” he said. “I’m not excited about wearing orange and possibly ending up in prison.”

Still, Wrigley, heir to the all-Ameri­can chewing gum fortune, couldn’t deny that the burgeoning legal marijuana industry checked off all his investment criteria: A trend in changing consumer behaviour, a transforming regulatory environment and multiple applications in health care.

So Wrigley rethought the proposition. He told Holmes to find a target company, and he eventually located one at home in Florida: Surterra Wellness. Wrigley and his team flew down to its 180,000-square foot operation outside Tampa, the company’s biggest facility where cannabis flower is grown. After inspecting the cultivation site—it was the first time the 57-year-old Wrigley, who says he has smoked pot only once in his life, had seen a room full of cannabis—the group boarded the plane home with the flowers’ sweet, pungent smell permeating their clothing.

“No one had known where we were, and I think they thought we were out getting high,” Wrigley recalls on a sunny afternoon while sitting on the patio of his North Palm Beach estate on Lake Worth lagoon.

Soon after that excursion, he led a $65 million investment round in Surterra, and in November 2018, he replaced the company’s co-founder as CEO. Renamed Parallel, Wrigley’s company now has 42 dispensaries across three states, with 39 in Florida and the rest in Massachusetts and Nevada, with new ones slated to open in Pennsylvania and Texas. To date, it has raised a total of $400 million, largely from Wrigley and other high-net-worth individuals. The latest funding round, which closed in 2020, valued the $250 million company (2020 sales) at an estimated $2 billion.

In 2019, Parallel spent more than $100 million on a Boston-based startup, Molecular Infusions, which is working on a THC-infused seltzer. Parallel is also in talks for a roughly $150 million acquisition of a three-store dispensary chain in Chicago, which would bring the company to the city synonymous with the Wrigley name. 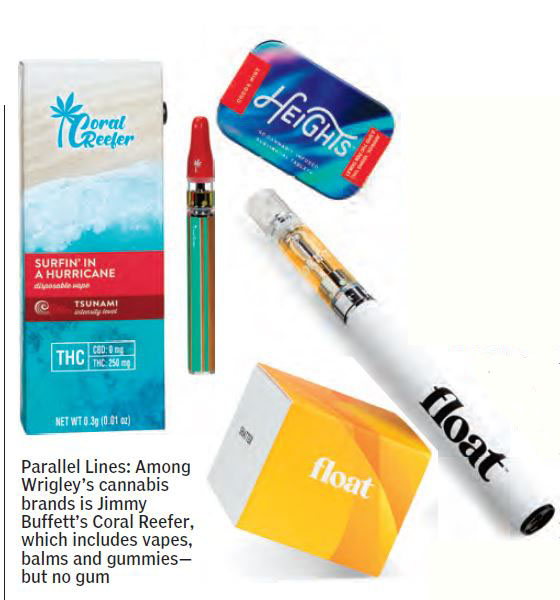 It’s also exploring going public in Canada via a SPAC deal, according to two people with knowledge of the discussions. Wrigley denies that the company will go public.

In just three years, Wrigley has transformed Parallel into a new kind of cannabis company. On a mission to build the first mainstream marijuana brand, he has stacked his management with executives and advisors from some of the largest and best-known corporations in the world—including Coca-Cola, Walgreens and Patrón Spirits. Wrigley believes his cannabis concern could one day rival his family’s chewing gum business, which he sold to Mars, Inc for $23 billion in 2008.

“I think this can be bigger than the Wrigley company,” he says. “At Wrigley, we brought joy to people’s lives. This is much bigger than that.”

Parallel is not the largest cannabis firm in America—Massachusetts-based Curaleaf is—or even the largest in Florida (that’s Trulieve), but it has slowly and methodically built up its operations. Its strategy is markedly different from that of Curaleaf, which pulled off an aggressive national rollup strategy headed by its billionaire chairman, Boris Jordan. Instead of a national land grab, Wrigley has mostly focussed on Florida, which he calls “New York South” and where medical marijuana is legal.

Florida has a growing population of 21 million and more than 100 million visitors every year, and Wrigley expects that when it legalises cannabis for recreational use, his company will grow by a factor of 10. “The potential is huge in Florida alone,” he says.

The hidden value in Parallel lies in its investments in medical and recreational R&D. The company inked an exclusive partnership with biopharma company Eleszto Genetika in Budapest, Hungary, in 2019. Through a yeast-based microbial process, Eleszto Genetika can genetically sequence rare cannabinoids and engineer specific effects at commercial scale. One future product Wrigley is excited about is CBN, a cannabinoid that helps improve sleep. 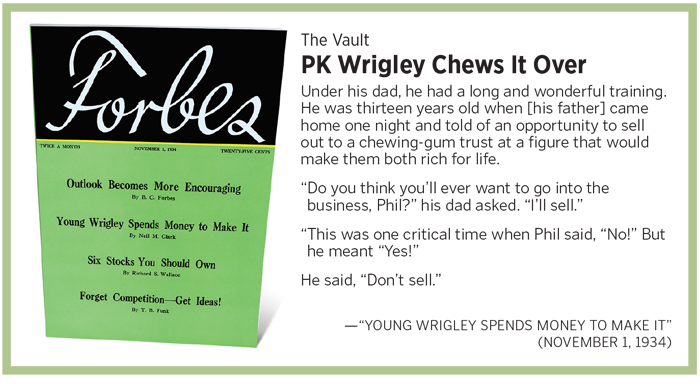 Parallel is also looking at THCV, which has the same euphoric effects as THC, the main psychoactive compound in cannabis, but is an appetite suppressant—meaning no more “munchies”, he says. The idea is to create a noncaloric alcohol replacement that “makes you feel better, is not more addictive than a cup of coffee, has no side effects,” he adds. “And, oh, by the way, it suppresses your appetite.”

He goes on, his Italian water dog, Rio, sitting at his feet: “One of these products is bigger than the entire company.”

Wrigley, who uses his company’s THC drops in lime LaCroix to unwind, says cannabinoids have the potential to improve “quality of life”, whether by easing one’s pain, reducing anxiety or helping promote a good night’s rest.

Parallel also has something no other cannabis company has: The Wrigley name.

Wrigley was born into one of America’s great business dynasties. His namesake great-grand­father, William Wrigley Jr, started William Wrigley Co in 1891 as a manufacturer of soap but pivoted in 1893 to produce Wrigley’s chewing gum instead. The company was handed down through the generations, and Beau’s father ran it until the day he died, in March 1999. Beau, who started working at the company over his summer break when he was 13, was 35 years old when he became CEO and chairman the day after his father passed away.

He is credited with breathing life into a 100-year-old family business by helping replace its natural-gum formula with a more cost-effective synthetic base and expanding its reach by acquiring Life Savers and Altoids. In October 2008, Wrigley closed the deal of his lifetime—he took Wrigley Co private by selling to Mars, Inc, another company owned by a family of billionaires.

Understandably, many assume Wrigley will produce a cannabis gum one day. After launching into a three-minute explanation of the science and molecular biology behind ensuring the release of the right flavours for the appropriate amount of time from chewing gum base, he says he’s concerned about how expensive the R&D process could be—as well as the risk of appealing to children. Still: “Never say never,” he says.

Much like Wrigley Co, Parallel has global ambitions. According to an investment document obtained by Forbes, Parallel is exploring cannabis and hemp cultivation licenses in Southeast Asia. (Wrigley admits he has spoken to government officials in the region but says talks have slowed during the pandemic.)

“In comparison to Wrigley, this is also a cross-cultural product,” he says. “Just like we sold in 180 countries, cannabis plays everywhere.”

When asked what his ancestors would think about his foray into the industry, Wrigley takes his time to answer. Standing on a wooden walkway leading to the main entrance of his estate, he is flanked by two ponds filled with koi. Flags on a small putting green nearby wave in the breeze off Lake Worth.

“Gosh, at first blush they would roll over in their graves,” he says with a smile.

Although pot is still illegal under federal law, 43 states have created their own legal markets of one kind or another, and with Democrats now in control of Congress, national legalisation seems closer than ever. “I don’t consider our business illegal,” he says. “It’s caught up in a political quagmire for the moment.”

Wrigley, who has a net worth of $3.1 billion, says he feels lucky to be a part of helping an industry transform from black-market to legal. The last generation of entrepreneurs who made that claim turned the desert town of Las Vegas into a city home to multibillion-dollar public corporations. Wrigley compares the cannabis industry today to Vegas in the post-Mafia period before luxury hotels dominated the Strip.

“I see us [as] in the era before Steve Wynn came and made it a destination experience,” he says. “Anyone can put up a table with green felt and gamble. But he created this whole experiential thing with the art, the Bellagio, the fountains, and it became a destination.” Wrigley believes Parallel can become the world’s first gold-standard cannabis company by changing how Americans view marijuana, much like Wynn made over Sin City’s image. “It isn’t about getting high,” he says. “It’s about quality of life.”

Tweets by @forbesindia
Covid-19 Vaccine FAQs: We answer your frequently asked questions about coronavirus vaccines
Photo of the Day: Vaccines for all