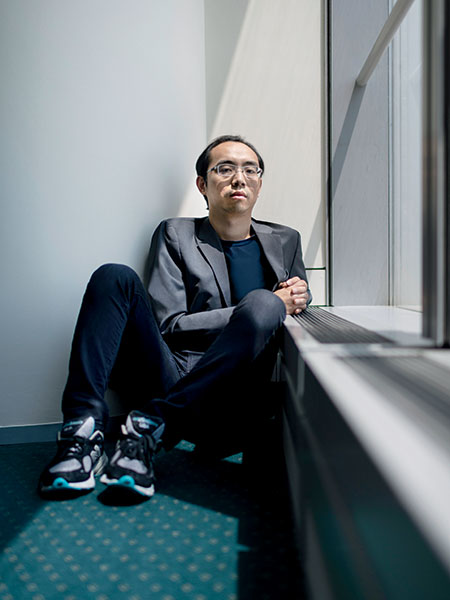 FBG Capital’s crypto trading whiz, Shuoji ‘Vincent’ Zhou, in a shared office in Beijing. He got hooked on trading bitcoin while caring for his newborn
Image: Stefen Chow For Forbes


On a damp Tuesday night in March, some 200 people crammed into a bar in San Francisco’s Four Seasons Hotel to discuss the buzziest topic in finance and tech: Cryptocurrencies. The party had been organised just two days earlier, yet in they poured, mostly Asian men in their 20s and 30s, carrying big ideas for how digital currencies might reshape the future and make them rich. They were lured by the chance to rub elbows with the latest overnight success story in crypto, FBG Capital of Beijing.

To the crowd assembled, FBG’s fame stems from turning $20 million into $200 million in a year. In fact, ten months before this soiree, the group of traders behind the firm didn’t yet have a name for their company. Today it counts Silicon Valley venture capital firm Sequoia Capital among its blue-chip investors and is one of the biggest crypto-asset managers in Asia. They have landed in America and are seeking investors.

FBG’s approach has three pillars: Invest like a venture capitalist in initial coin offerings (ICOs), trade on news and events by moving in and out of tokens rapidly and, critically, exploit insider relationships and marketing hype to ensure profitability. The firm’s rise speaks volumes about the anything-goes world of cryptocurrencies, where the stated ideals of democratisation are a joke and being an insider is the surest path to riches.

FBG founder Shuoji Zhou, 36, grew up in Yancheng, China. He studied applied math at the University of Electronic Science & Technology, but he wasn’t there for the coursework. “Friendship, I think, is the most important thing in college. I forgot all the things I studied,” he tells Forbes from a hotel room in San Francisco. FBG, which stands for Fintech Blockchain Group, has employees in New York, Singapore, South Korea and China.  Until recently its headquarters was a shared co-working space in Beijing.

After college, Zhou worked in Beijing as an IT consultant for IBM and then Oracle, and in 2014, he committed $10,000 of his savings to trade bitcoin. The next year, he left Oracle to trade crypto full-time and increased his stash to nearly $100,000 during a period when the digital coin went from $270 to $430. One of Zhou’s tricks was to capitalise on the inherent inefficiencies of the nascent market. He could often buy bitcoin on one exchange at $300 and sell it on another at, say, $301.50, pocketing a riskless $1.50 per coin.

He soon joined a group of like-minded Chinese traders who pooled their money, and by early 2017, they had amassed some $20 million. His group ploughed millions into dozens of projects like Tron, Decentraland and MakerDAO.

FBG’s amorphous investment process, where hard numbers are nearly non-existent, is typical in cryptoland and has so far returned riches. Its investment in OmiseGO, a crypto platform that claims it will provide financial services to unbanked populations, leaped by 33 times after FBG bought coins at $0.27 a pop in mid-2017. It bought tokens in Zilliqa, a platform for speeding up financial transactions, at about nine tenths of a cent per token. This year, Zilliqa has traded as high as 20 cents and now sells for six, a 567 percent return. Like other big investors in crypto, FBG is offered “presale” discounts on ICOs to the tune of 30 percent.

“I view FBG as just one of the most talented investor teams in this space,” says Olaf Carlson-Wee, 29, a crypto wonder boy who graced the July 27, 2017, cover of Forbes and is the founder of the largest crypto fund in the US, Polychain Capital, which has roughly $1 billion in assets under management.

According to Zhou, trading makes up more than half of FBG’s revenue, but as the crypto trading environment has become more transparent and efficient, the firm has moved from arbitraging crypto exchange-price discrepancies to event-driven trading, in which FBG bets on how topics like regulatory news will affect crypto prices. For example, when the CME Group announced it would launch bitcoin futures contracts last December, Zhou went long on the bitcoin uptick. When news broke that the Japanese exchange Coincheck had been hacked earlier this year, he quickly went short. In 2017, FBG says it quadrupled its money in trading.

Not all of FBG tactics seem completely aboveboard. One little-publicised investing dynamic that FBG’s executives gloss over is its relationships with cryptocurrency exchanges, the crypto equivalent of the NYSE or Nasdaq. Typically, when a new token announces its listing on a top exchange, the price jumps because the new liquidity is perceived as an endorsement. Zhou has cosy relationships with the three most active crypto exchanges: OKEx, Binance and Huobi, each processing $500 million to $1 billion or more in crypto trades a day. Using these connections, FBG has helped ICOs it has invested in, like Zilliqa, obtain listings on the exchanges.

Many crypto hedge funds try to influence exchange listings, but FBG has a compelling advantage: Trading volume. Since FBG is an active market-maker—it says it does $10 billion worth of trades a month—it can direct orders toward any given trading platform, bringing more revenue to an exchange.

Zhou says he doesn’t have any “special rights” to influence which coins get listed on any exchange. He can only make recommendations, and exchanges make their own decisions. One problem is that they’re not all disclosed. Singapore-based Huobi, for example, has a committee of outside partners who make token-listing recommendations, which are published on its website. FBG is on the committee. But Binance makes no such disclosures.

Hyping its investments is another strategic priority in FBG’s business model. In China, FBG connects ICOs with media agencies that pay bloggers to write positive reviews of their tokens, apparently a common practice in Asia. Last year FBG invested in Tron, a crypto platform that says it’s creating “a global free content entertainment system, utilising blockchain technology”. Tron originated in China and has been criticised for allegedly copying pieces of its research documentation directly from another crypto project, Filecoin.

Why did FBG buy into Tron? “We thought he was a very good marketer,” says FBG partner Richard Liu of Tron CEO Justin Sun. Sun has hyped Tron to a $18.9 billion peak market value, despite no meaningful revenues.

FBG also has a reputation for getting in and out of investments quickly. “They’re flippers,” says Yubo Ruan, founder of Palo Alto-based 8 Decimal Capital, a rival crypto hedge fund. “Their reputation is pump and dump.”

Liu, a former investment banker who joined  FBG in June 2017, denies the accusation. The is reluctant to reveal specific holdings. One exception: Aeternity, which competes with Ethereum, the second-largest crypto platform.

So far in 2018, bitcoin has dropped by more than 50 percent. Liu claims FBG’s trading has been profitable each month, even though he also says its ICO investments are down about 30 percent in the current bear market.

Like most big crypto investors, FBG worries about regulation. Zhou’s biggest concern is that the SEC could say, “All these tokens are illegal.” Dark clouds be damned, FBG is pushing ahead, soliciting investors for its new Cayman Islands-registered Volatility Token Fund. It has already raised $100 million, with fees of “1.5 and 20”. Besides Sequoia and Polychain, Beijing’s Bitmain, the biggest bitcoin mining operation in the world, has committed to FBG’s new fund. “We want to be an institution rather than just people making money,” Liu says. Who knows? In a market where being ­anti-establishment is rewarded, FBG’s fuzzy money management approach may be just right.

Tweets by @forbes_india
Striking the right chord: Culture and emotion in consumer choice
We go for fundamentals: Florian Seiche