How the lotus weeded out Trinamool hegemony in West Bengal

A ground report of why the people of the state turned the tide in the 2019 Lok Sabha elections, marking a landmark BJP victory in the region 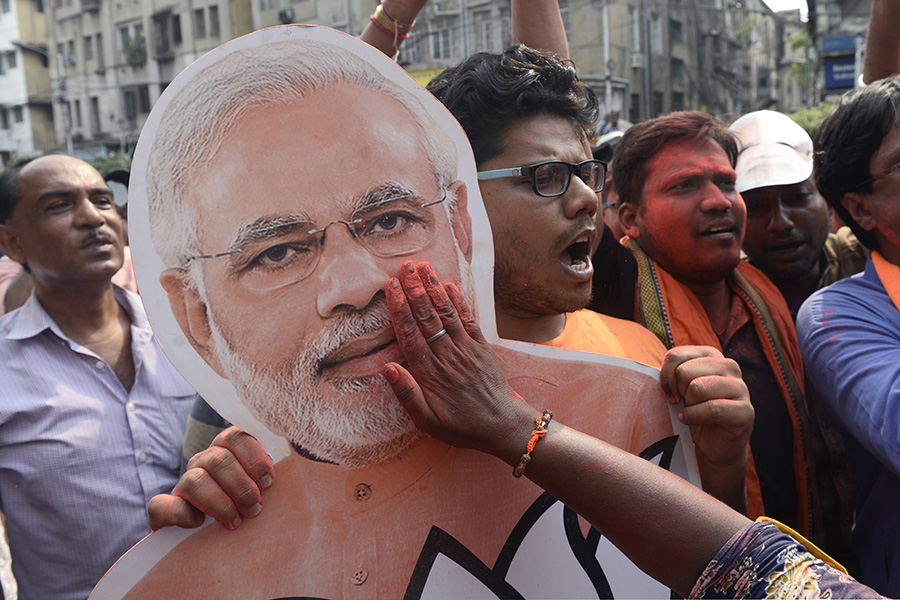 Bharatiya Janta Party activist smear color on Prime Minister Narendra Modi picture as they celebrate their lead on Lok sabha election on May 23, in kolkata.
Photo by Saikat Paul

Fifty-year-old Kali Chaurasiya, a resident of CR Avenue in Kolkata and the owner of a hardware business shop, danced non-stop for 30 minutes for media cameras, celebrating the victory of the Bharatiya Janata Party (BJP). He told correspondents that it was clear by 9 am itself that Narendra Modi is set to return for a second term as Prime Minister. Many such celebrations could be witnessed in Kolkata as the Lok Sabha election results came trickling in. By 4.30 pm, the situation was clear. While the Trinamool Congress (TMC) won 22 seats, the BJP came close with 19 seats. In terms of vote share, the TMC polled 42 percent votes whereas the BJP secured 41 percent. This is the saffron party's biggest victory in West Bengal. While the BJP cadre and supporters revelled the party's landmark performance, the TMC maintained a stony silence. TMC supremo and West Bengal Chief Minister Mamata Banerjee scheduled a press conference, postponed it and then called it off. "The result has proved that the Mamata government is going to fall apart. The people of Bengal have provided her with a befitting reply after what she has done to them," said Raju Banerjee, general secretary of the BJP’s West Bengal unit. BJP leaders and Lok Sabha candidates such as Locket Chatterjee, Babul Supriyo, party state president Dilip Ghosh and Jyotirmoy Mahato led the fight and won by handsome margins. Although Kolkata Uttar, Dakshin, Jadavpur, Dum Dum, Diamond Harbour, Basirhat, Birbbhum saw the TMC scoring wins, the party’s overall performance has given it a reason to question its dominance in the state. Shyam Dan, an unskilled labourer from Singur—best known as the site first chosen for manufacture of Tata Nano, which was then driven out due to TMC-backed protests—said the TMC made the locals believe the industry would finish off the farmers and take away their financial independence. “The Nano episode is many years old now and the youngsters of Singur are sitting jobless at home,” he said. “Families are dying of hunger. They eat once a day. We never wanted this parivartan (change).” Chatterjee, the BJP candidate from Hooghly (where Singur lies), said "Parivartan was just an eyewash. They [TMC] exploited the people of Singur in its name… With Narendra Modi's support, we hope to bring about a change that promotes development." Asansol too saw a surge in the support for the BJP over the past five years. The Hindi-speaking belt chose Babul Supriyo as its representative with a winning margin of almost a lakh votes. "We do not need any congratulatory message from Madam Banerjee. Enough has been done and said. She has brought scathing attacks on me several times, she challenged me if I could ever win from Asansol and here I am, making my mark in Asansol,” he said.   Role of religion
Shambhu Pandit, a jute mill promoter, said, "With TMC's increasing dadagiri (hooliganism), it was getting very difficult for us to live in peace. The other community is shielded by the state government all the time while they are free to come in anytime and vandalise our colonies and houses." Sentiment on the street is that Banerjee’s minority-appeasement went against her this time. It left a lot of Hindus angry and apprehensive about their own existence. Diamond Harbour, which should have been an easy win for the CM’s nephew Abhishek Banerjee, saw the BJP's Nilanjan Roy giving him a tough fight. "There are Hindu families tortured by TMC goons here. That is why today they are rebelling. I might have lost by a few thousand votes but remember the amount of rigging that took place in the state," said Roy, who was also slapped with a molestation case right before the elections. A TMC candidate unwilling to be named said, "All these riot talk is fake news, spread by social media and BJP men. Voting was peaceful and fair in Diamond Harbour. It is the people's verdict."   Left out
The Left got wiped out this election. Not only did Left parties fail to win a single seat, but leaders such as Md Salim, Bikash Ranjan Bhattacharya and Fuad Halim did not poll more than 20 percent votes. Left-front leaders stayed away from the media in the wake of the results. Saurav Kanti Sen, a leader of Students' Federation of India (Communist Party of India's student wing), said that a CPI loyalist would never vote for the TMC, so their share of votes must have gone to the BJP.
(The author is Kolkata-based freelance writer and a member of 101Reporters.com, a pan-India network of grassroot reporters)

Tweets by @forbes_india
Mayanti Langer: On the right pitch
Forbes India Editor Brian Carvalho talks about the making of the first ever sports special issue