JD(S) patriarch and family stare at defeat and coalition with the Congress on thin ice, as BJP leads in 26 out of 28 constituencies 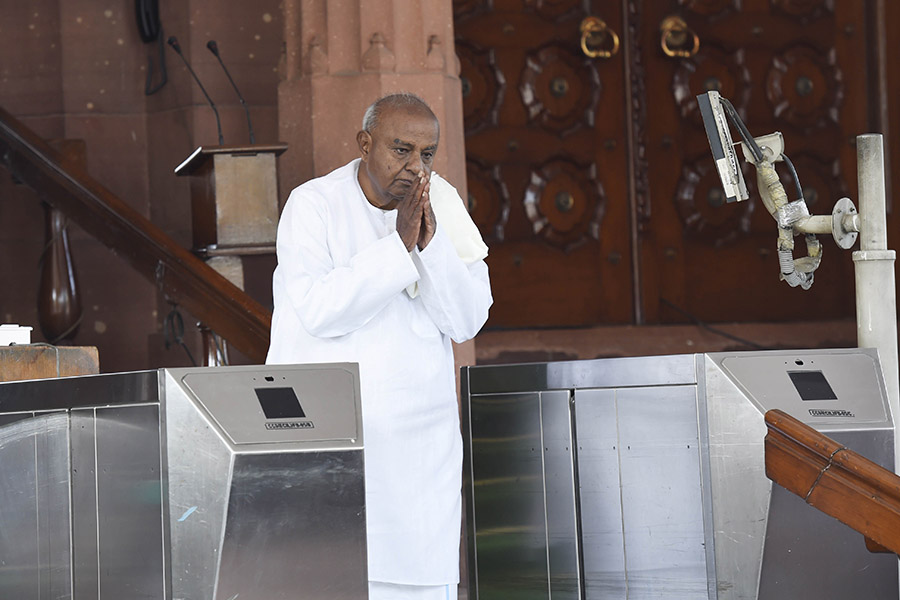 The Lok Sabha elections have dealt a rude shock to the dynasts of the JD(S), with party patriarch and former PM HD Deve Gowda staring at a defeat after two decades. His grandson, Nikhil Kumaraswamy, an actor and son of Karnataka chief minister HD Kumaraswamy, is also likely to bite the dust.

While Deve Gowda is trailing BJP veteran GS Basavaraj in Tumkur by 19,000 votes, Nikhil has significant ground to cover before counting ends. He is trailing an independent candidate, Sumalatha Ambareesh, in Mandya, by more than 75,000 votes. Sumalatha is the wife of deceased Congress leader and superstar Ambareesh.

Incidentally, the Congress decided against fielding a candidate from Mandya, which has been Ambareesh’s stronghold for the past 20 years, as part of the seat-sharing agreement with the JD(S). Consequently, a lot of disgruntled party workers threw their weight behind Sumalatha.

The Congress and the JD(S) have been running a coalition government in the state for the past year.

The only saving grace for the Deve Gowda family was his other grandson, Prajwal Revanna, who is on course to rout BJP’s Manju A with a thumping majority of close to 1.4 lakh votes from Hassan, which has been a JD(S) stronghold for decades. Since 1991, Deve Gowda has won from Hassan in all but one Lok Sabha election (in 1999).

Overall, the BJP has swept Karnataka, barely a year after the party ceded grounds to the Congress-JD(S) coalition in the state elections. The BJP is leading in 26 out of the 28 constituencies in the state. The Congress’s DK Shivkumar has been the only saving grace, leading the BJP’s Ashwath Narayan Gowda by close to 2 lakh votes in the Bangalore Rural constituency.

Not only are the old BJP hands, such as former chief minister DV Sadananda Gowda, PC Mohan and GP Chandanagouda, likely to emerge victorious, but incumbents such as Tejasvi Surya are also emerging with flying colours. Surya, a former member of the BJP technology cell and nephew of three-time BJP legislator LA Ravi Subramanya, has a lead of more than 3 lakh votes over BK Hariprasad of the Congress from the Bangalore South Constituency. Incidentally, this was the stronghold of deceased BJP leader Ananth Kumar, who had won the 2014 elections by a margin of 2.2 lakh votes.

Surya, who could not be reached for comment, wrote on Twitter, “Bengaluru South, thank you. I will be forever grateful for the love you have given. My pranams.”

While the BJP making swift inroads into Karnataka isn’t surprising, the fate of the Deve Gowda family at the hustings has raised some eyebrows. “It wasn’t expected that somebody like Deve Gowda and also his grandson will be defeated. Defeating the incumbent chief minister’s son is not a cakewalk. Also, with the Congress routed, the developments don’t augur well for the coalition,” says a Congress worker.

Analysts say the Congress-JD(S) alliance was, in fact, counterproductive for both parties, which could now go their own way. This could lead to a fresh round of state elections.

Says Narendar Pani, political analyst and faculty at National Institute of Advanced Studies, “Karnataka has three major political forces—the JD(S), the Congress and the BJP. An assumption that the Congress and the JD(S) could work together was a mistake, as on the ground, the workers don’t gel. They both would have done well without each other as this is a very loose coalition here. I won’t be surprised if the coalition breaks.”