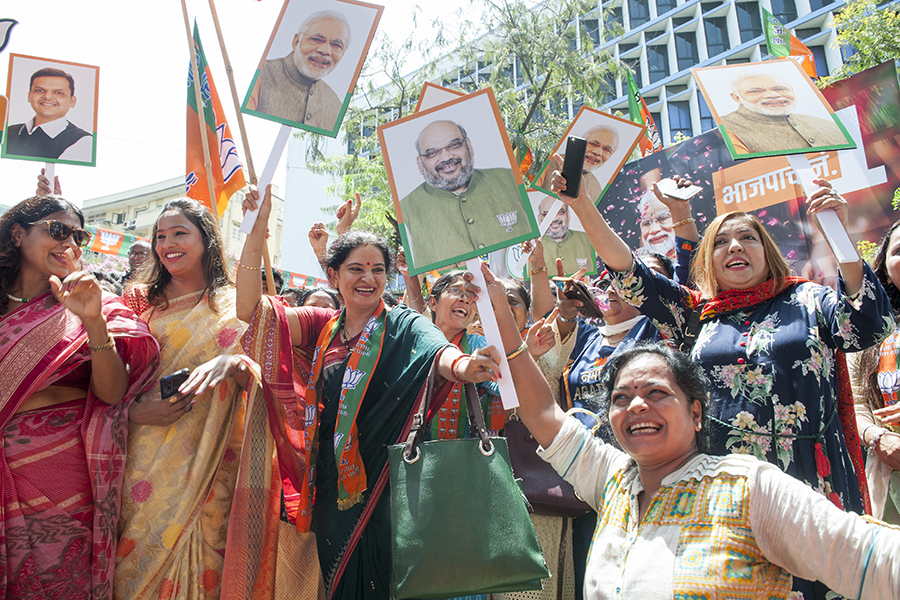 The euphoria witnessed on Thursday at Sena Bhavan in Dadar, the headquarters of the Shiv Sena, was reflective of the mood the city.

As the position of Sena candidate and sitting MP Arvind Sawant (Mumbai South constituency) grew stronger against his nearest rival Milind Deora of the Congress, Sena workers rejoiced with the beating of drums, raising slogans of victory, bursting fire crackers and waving the bright orange flag.

This was against the backdrop of a giant video screen where images of party founder Bal Thackeray and current president Udhav Thackeray meeting the BJP leaders in recent years.

Till late evening, Sawant was leading Deora having polled 52.7 percent of the votes compared to 40.41 percent for Deora. “2014 was a [Narendra] Modi wave, today was a Modi magic,” said Nikhil Wagle, journalist and political analyst.

Mumbai—and particularly South Mumbai—has often been accused of electoral apathy. After all, this was the constituency which recorded the lowest ever city-voter turnout of 41.4 percent in the 2009 general elections.
This year the turnout for the Mumbai South was 50.17 percent while the turnout for the entire city was 55.1 percent.

Prior to voting, Deora, the son of former veteran Congress politician and former oil minister late Murli Deora, had posted a video on his Twitter account where Mukesh Ambani was heard as saying: “Milind is the man for South Mumbai. Having represented South Mumbai for ten years I believe that Milind has in-depth knowledge of social, economic and cultural ecosystem of the South Mumbai constituency.”

However, the strong Modi wave appeared to have swept Deora away. “Entire Mumbai usually goes the way India goes,” says Wagle, adding that the focus for the BJP-Sena will now move towards the legislative assembly elections in October.

Deora had won from South Mumbai in 2004 and 2009, but has now lost out to Sawant twice. Sawant, according to the media reports, has promised that if re-elected he will focus on rehabilitating residents of slums by providing free housing on land from the Bombay Port Trust. The focus, he said, would also shift to building factories in areas where mills once stood.

Political commentator Arati Jerath said Modi, in the coming years, was unlikely to tinker around with the “successful formula” which Maharashtra and other states had seen. “Modi has a vision for development that revolves around focussing on mega-infrastructure projects—roads, highways and flyovers. This is what he will seek to implement in coming years.”