Titan Industries wears the crown as India’s jewellery and watch king, thanks to Bhaskar Bhat’s turnaround effort. The retailer vows to keep expanding, despite the economic headwinds 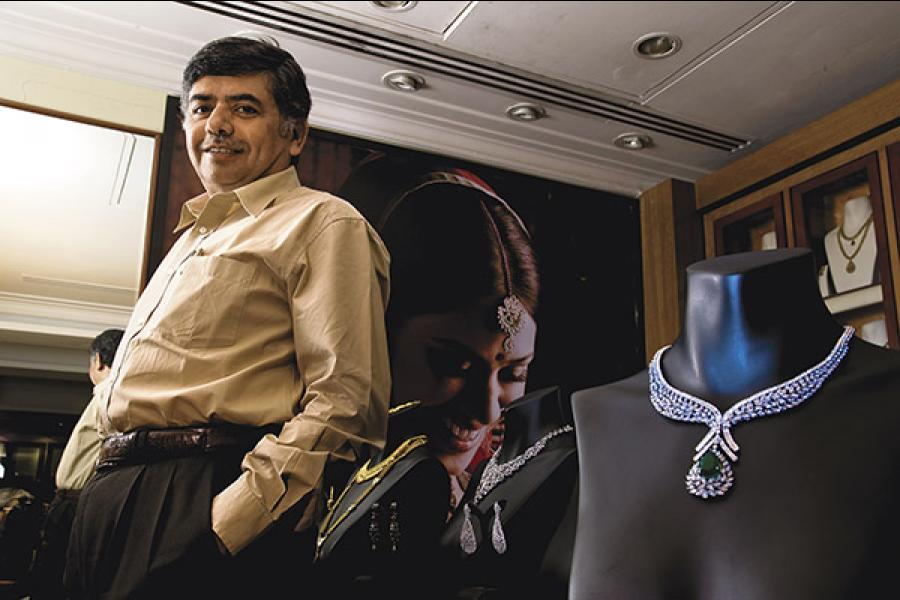 Image: Gireesh GV for Forbes India
MIDAS TOUCH Bhaskar Bhat has brought Titan from the 'jaws of death' onto the road to success, as one investor put it

Back in 2002, Indian watch-and-jewellery-maker Titan Industries was in the doldrums, saddled with debt from a flailing jewellery business and an expensive foray into Europe. That’s when the new Managing Director, Bhaskar Bhat, sat down with Indian investor Rakesh Jhunjhunwala, who was considering putting money into the Bangalore company. They met for nearly three hours. “Bhaskar was extremely blunt and truthful,” recalls Jhunjhunwala, who is often referred to as India’s Warren Buffett. “He said that the task [of turning around Titan] wasn’t easy, but he would do it.”

Today Jhunjhunwala owns 11 percent of Titan, and it’s an investment that’s certainly paid off. In the past decade, Titan’s market capitalisation has soared from $45 million to $3.5 billion. In the same period, its annual revenue has jumped from $153 million to $1.74 billion, while profits have mushroomed from $1 million to $118 million. “[Bhat] brought it from the jaws of death onto the road to success,” says Jhunjhunwala. “Now Titan is best positioned to capture the mega retail opportunity that India presents.”

This year, for the first time, Titan clinches a spot on the Fab 50 list. The company is graduating from last year’s 'Waiting in the Wings' list of companies poised to crack the top 50. “The whole mantra is growth,” says the 58-year-old Bhat, who started his third five-year term as managing director in April. “We have an aspiration to grow to three times our current size in the next five years.”

Since its founding in 1984, Titan has gone from a niche watchmaker to a leading speciality retailer that sells everything from gold jewellery to bags, belts and wallets. Titan boasts of five manufacturing plants and 847 stores in seven chains across 160 towns around India. And it’s now incubating new businesses in youth watches, prescription eyewear and branded leather accessories.

Titan is looking to add 320 stores in different brands over the next year. Jewellery, which contributes 76 percent of revenue, will continue to be a big growth driver. The company is the country’s biggest jewellery retailer, with nearly twice the sales of Dubai’s Joyalukkas, which is No. 2, according to Ambit Capital, but it has less than a 6 percent market share in the $28 billion gold jewellery market. It pioneered branded jewellery in India with its Tanishq brand, introduced in 1996, and that segment is expected to grow 40 percent a year over the next five years. “We have a lot of headroom for growth,” says Bhat. “We are trying to change the game toward diamond jewellery. We’ve made diamonds more price-friendly.”

In recent months, Titan has launched diamonds for teens and diamond-studded lines for working women. It’s also spearheaded an affordable-diamonds campaign sell- ing diamond jewellery for $180 to $450. The gold-to-diamond ratio at Titan is now at 72-to-28. Within five years, it wants diamonds to make up 40 percent of jewellery sales. It’s a smart move, given the rapidly rising rupee price of gold—it’s up nearly 60 percent in two years, according to the World Gold Council.

While Titan is bullish, analysts say growth isn’t going to be easy, with India’s stubbornly high inflation, a slowdown in the economy and lacklustre consumer sentiment. “Nothing seems good for the economy,” agrees Bhat. “But for us it’s not that bad because we have significant amounts of cash. We don’t want to stop expanding.”

Titan needs to keep growing because volume growth has sagged in the last few quarters. Total Indian jewellery demand for the first half of this year dipped to 263 tons from 378 tons for the year-earlier period. So the company is drumming up sales with new stores and a push across several segments. One thrust, for instance, is its Goldplus stores—first rolled out in 2006 for southern markets.

These are mass-market stores aimed at customers who are looking at gold more as an investment and less as an adornment. This $100 million segment is expected to double in the next three years.

Over the longer term Titan is also looking at expanding into the swathe of 400 second-tier cities with populations of 200,000 or more. “We see huge potential in middle India,” says Bhat.

Jewellery is a highly competitive segment where Titan jostles for visibility alongside 300,000 mom-and-pop retailers. But the company has a history of entering unorgan- ised sectors and then bringing in more professionalism and more players. It happened with watches and then jewellery and now with youth accessories and prescription eyewear. “We get in early, and we trigger the growth,” says Bhat. 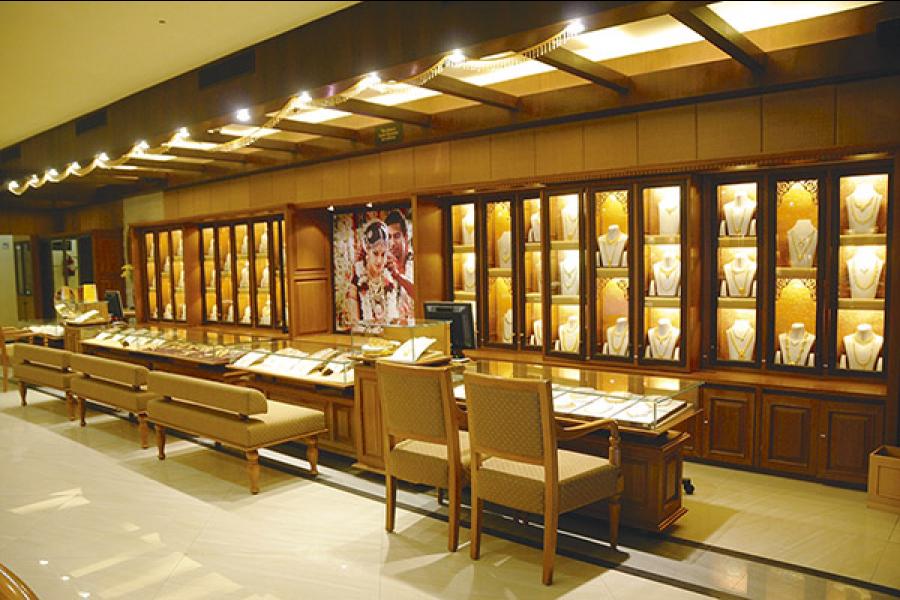 MORE IN STORE Titan is looking to add 320 stores over the next year. This store is in Chennai
But while Titan is entering multiple segments, jewellery overwhelms every other sector because of its sheer size and value. “The big challenge for them is to find the next big sector,” says Jaibir Sethi, research analyst at CLSA. “They are more dependent on jewellery than they would perhaps like to be, but then the size of the opportunity is so large.”

While Titan is scanning for new sectors, Bhat acknowledges that it isn’t easy. “You can say we could enter mobile phones or furniture, but we don’t have the competencies,” says Bhat. “The customer has to walk in through the door of the store and pull out his credit card and love the product and come back.” This is how Titan is able to hold its own in segments such as watches, where it claims a 65 percent share of the organised market. It offers something at different price points, from its $4 Sonata watch to an 18-karat gold watch priced at $6,800 called Nebula. It has also rolled out high- tech watches that can be charged by any form of light, children’s watches with trendy themes and teen watches with catchy messages.

Only 27 percent of Indians own a watch, and the $1 billion watch market is expected to double in the next five years. But at the premium end Titan faces stiff competition from global brands. Meanwhile, Titan’s move into the youth market is becoming a key differentiator as it hawks bags, belts, wallets and helmets.

As for overseas markets, Titan has a taken a cautious approach. Its chant has been only watches and only Asia and the Middle East. It sells through 1,850 overseas outlets, with more than 1,000 of those in the Middle East. In the Gulf, it’s luring Arab customers with gold-plated and water-resistant watches. But exports make up less than 5 percent  of total revenue. Bhat believes that “there’s no reason to pursue costly growth abroad when there’s so much growth that’s possible in India”. 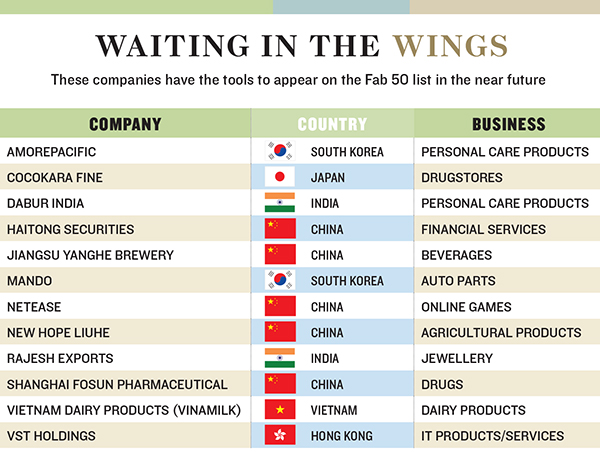 Titan’s measured global approach is the result of a lesson learned in the 1990s, when Titan entered 11 European markets—opening offices in London and Paris—with steel quartz watches. It hired European designers and roped in a London advertising agency, leading to a huge debt pileup. “We had no idea that the ‘Made in India’ tag would be such a negative,” says Bhat. “Since then, we’ve always done a pilot before large-scale rollouts.” Titan started as a watch project—a joint venture between the state-owned Tamil Nadu Industrial Development Corp and the Tatas. (Tidco still holds 28 percent, and the Tatas hold 25 percent). It set up its corporate office in Bangalore and its watch manufacturing plant in Hosur. And it opted to make quartz watches at a time when India was into mechanical watches.

Bhat had started at the Tata Group in 1983 after a five-year stint at industrial conglomerate Godrej & Boyce and then joined the watch project. Armed with an engineering degree from IIT-Chennai and a postgraduate diploma in management from IIM-Ahmedabad, he wended his way through the corporate hierarchy. He became managing director in 2002.

His first year at the helm was brutal. He laid off nearly 20 percent of Titan’s 3,000-strong workforce. Soon a 67-day lockout came. “Those were tough days,” recalls Bhat. It was back to the basics. “We told our guys that every month we have to generate cash and not just brand image,” he says. “We have to buy less and sell more. Keep less inventory.”

What helped was his ability to stay calm amid a crisis. “In all these years I can’t recall even one episode where he has lost his cool,” says V Govindraj, who heads retail services at Titan. “Even when you start with a lot of gloom, he’ll charge everyone with a mantra.”

But Bhat is modest about his contributions. “Today I can claim that I had this vision of a $3 billion company and that my dream was to head it. It’s easy [to say that now].”

(This story appears in the 12 October, 2012 issue of Forbes India. To visit our Archives, click here.)