Last year, with all the hype and excitement surrounding the inaugural Indian Grand Prix, the organisers had no problem in selling tickets. But now that the novelty factor has waned, ticket sales are being closely watched. 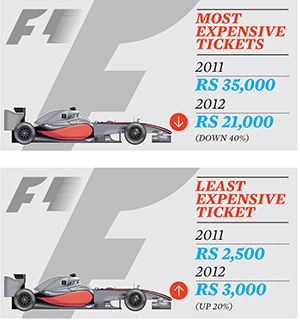 Ticket prices for this year’s Grand Prix—held at the Buddh International Circuit in Noida between October 26 and 28—point to an interesting divergence: Organisers believe that demand for the cheapest tickets is relatively inelastic compared to that for the highest-priced ones. The Rs 21,000 being charged for a three-day access to the main grandstand is a drop of 40 percent from what was being charged last year. Those who plan to watch the race from the picnic stand will have to shell out Rs 3,000 for a three-day pass, a jump of 20 percent over last year’s price. Seating capacity here will be more than doubled from 6,500 to 15,000. And for those who only have time to spare on Sunday, the race day, there’s a new ticket category—priced at Rs 2,000—this year.