The dystopian South Korean thriller has become the most popular Netflix series launch ever, but it is unlikely to pass China's censors because of its brutally violent content 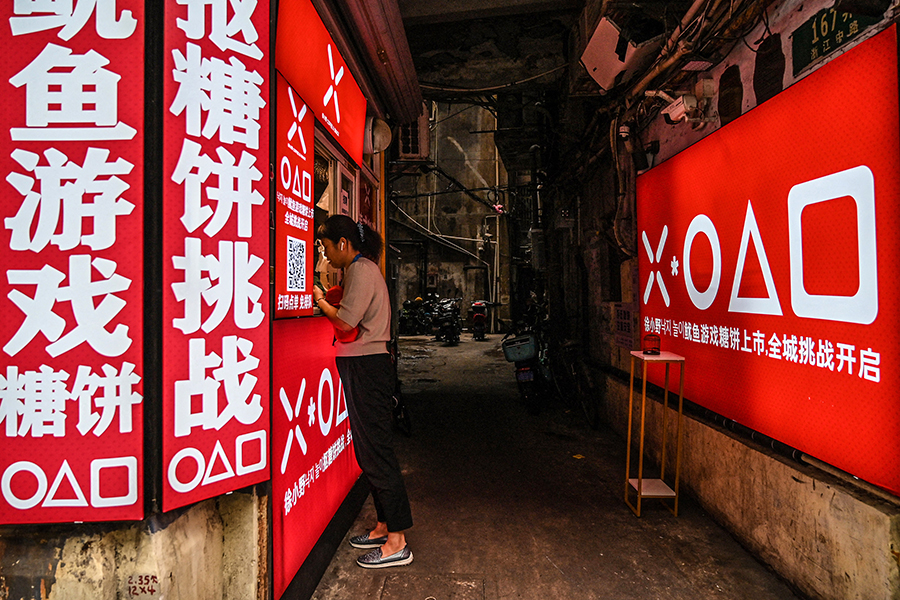 It is not available in China but Netflix's global sensation Squid Game has already built up a huge following in the country, with fans dodging strict internet controls to stream the show and snapping up merchandise such as its unique outfits.

The dystopian South Korean thriller has become the most popular Netflix series launch ever, the streaming giant said Tuesday, but it is unlikely to pass China's censors because of its brutally violent content.

Yet it is already a hit in cities such as Shanghai, where a crowd formed Tuesday at an eatery selling dalgona—the crisp sugar candy featured in one episode—with customers gathering at its Squid Game-themed sign to take photos.

"People were sending jokes related to the show in group chats when I started watching," a customer surnamed Li told AFP.

"It's rather fast-paced and therefore, quite thrilling," the video producer said of the series.

After buying the candy, Li and his friend filmed their attempt at a challenge from the show, where contestants try to cut shapes from the snack without cracking it.

Squid Game features a group of society's most marginalised and indebted people who are forced to compete in a series of children's games until all participants are dead except one. The "winner" gets $38 million.

As the show became an international hit, China's ever-nimble manufacturers raced to tap into demand, with products—including the bright pink uniforms and eerie masks worn by anonymous guards—popping up across the giant online shopping platform Taobao.

Vendor Peng Xiuyang told AFP his sales had spiked by around 30 percent thanks to demand for Squid Game merchandise.

He had never heard of the show when a customer asked last month if he sold the masks—a plain black full-faced covering printed with squares, triangles or circles.

But now vendors like him and plastics manufacturers in the eastern hub of Yiwu are all rushing to meet demand—from both domestic and international buyers.

"Our customers are those who have seen the series and want to join in the trend," he added.

With Halloween coming up, the spine-chilling masks have become his most sought-after product.

The lack of official availability has not stopped Chinese audiences from finding ways to watch the show—including easily available unofficial streaming sites or file-sharing.

The piracy problem is so widespread that South Korea's ambassador to China, Jang Ha-sung, recently told a parliamentary audit that he had asked Chinese authorities to take action.

"Our assessment is that Squid Game, which is gaining global popularity, is being illegally distributed on around 60 sites in China," Jang said, testifying remotely from Beijing.

As fascination with the show swirls among China's tech-savvy youth, the hashtag "Squid Game" got nearly two billion views on social media, and related topics have been trending for weeks.

Users discussed how they would pass the challenges featured in the show, and wondered what a Chinese version of Squid Game would be like.

But one user said: "It's not like it would pass censors if we made such a show ourselves... if it were too violent, it would just get taken down."

For now, fans just want to have fun.

A customer in Shanghai surnamed Yang said: "I've seen (the snack) being sold online, but it's my first time finding it in real life."

Tweets by @forbesindia
From the runway to the street, fashion is shaking off traditional notions of gender
China's power problems expose a strategic weakness