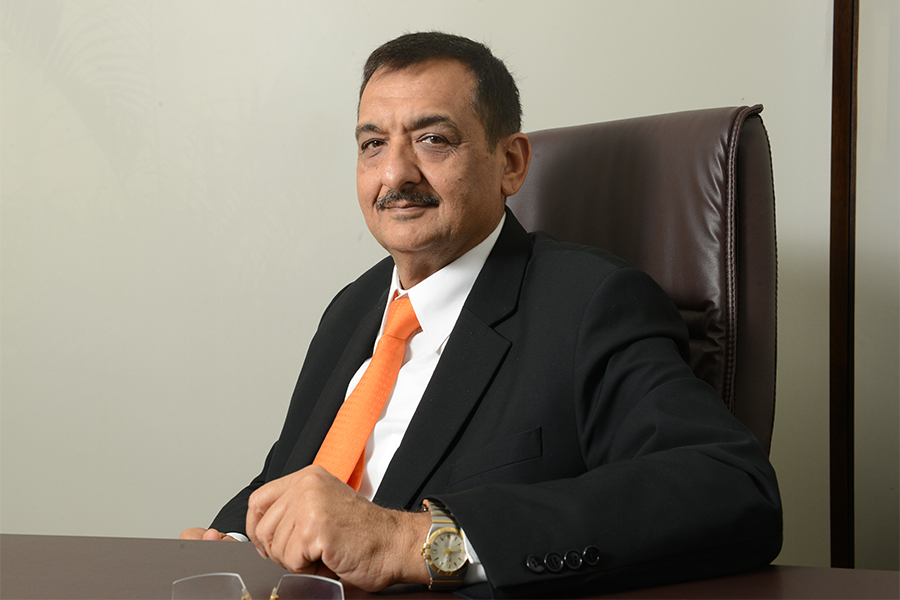 Deep Malhotra
Chairman And Managing Director,
Oasis Group of Companies
Years of experience: 45 years Mr Deep Malhotra is described as a passionate, disciplined, creative, and independent entrepreneur with strong interpersonal skills who works closely with people, to build great relationships with teams, customers, suppliers, shareholders, investors, and more. He set up the Oasis Group of Companies, a highly reputed conglomerate with diverse interests that include distillery, liquor retailing, hotels, export and power. Mr Deep Malhotra draws inspiration from his father Late Shri Om Parkash Malhotra who had set up the liquor retail business since 1950. The retail business which was started in 1950 as a modest beginning of entrepreneurship by Late Shri Om Parkash Malhotra bloosmed into a big venture of 600 -700 retail vends which gave him exposure to the IMFL business and the first distillery was commissioned under his guidance. His sons Gauravh Malhotra and Gautam Malhotra have followed their father’s footsteps. Mr Gauravh Malhotra, aged 38 years, is the elder son. He holds the position of Director in the group companies. He completed BBA from University of Western Sydney, Australia and actively looks after the day-to-day management of the group companies. He has a keen interest in brand development, product launch, marketing and sales besides looking after the company’s large retail and operations. Mr Gautam Malhotra, aged 36 years, holds the position of Director in the group companies. He actively looks after the operations of the distilleries situated at Ambala and Indore besides ENA and IMFL exports and Delhi Foreign Liquor market and Uttar Pradesh. Charting The Path
Having understood the nuances of Indian IMFL business during teen years, Mr Deep Malhotra wanted to establish his own liquor production facilities, generate employment opportunities, and contribute significantly to the state exchequer in terms of revenue. He always aimed to become a successful Enterprenuer The Oasis Group of Companies, a fastgrowing conglomerate with annual turnover of Rs. 1700 crore has diversified operation in the fields of alcohol manufacturing , bottling of Indian made foreign liquor, hospitality, and exports. It is one of the largest producers of Grain Neutral Spirit in the country owning five state-of-the-art grain distilleries and four own bottling units and an additional eight bottling arrangements across the country. With a presence in 14 states, the group supplies international quality grain-based alcohol, which is supplied to Diageo, Pernod Ricard, Allied Blenders and other established liquor houses. The thrust on exports of Bulk spirits took the Group to greatest heights and group became the highest exporter of ENA from India to Africa and other Countries. As a part of their expansion strategy, the company plans to further increase its spirit production capacity and increase the BII and BIO portfolio to be abreast with growing demands and ahead of changing times. The group has recently signed Mr Sanjay Dutt, a known Bollywood Actor, as a Brand Ambassador for All Seasons Connoisseur Collection Reserve Whisky, which has won 14 International Awards. Challenges and risks
Mr Malhotra says, “Professional life offers new challenges and opportunities everyday and the same are resolved with courage and passion for work with utmost honesty, that is what makes the difference.” While the green field acquisition was under consideration, the group was implementing another New Distillery at Bhatinda Punjab and collectively during this period the group expansion was multifold resulting into the commissioning of three new distilleries during fy 2013-2014. Identifying market opportunities
Mr Malhotra adds, “Multinationals are ruling the roast in the Indian liquor industry for a long time. It is time for domestic companies to make its mark in the market and give foreign players a run for their money in the respective IMFL segments. The local companies understood and responded to the market conditions much better than their foreign competitors. Oasis is ambitious to bring some desirable changes in India’s Fuel and Energy sector with its highly anticipated Ethanol-based and renewable energy project, which will help our country to cut on imports on account of fuel costs.” Life Lessons
Mr Malhotra says, “As an entrepreneur, having the rich experience of IMFL industry coupled with sharp business acumen, a ‘go getter’ attitude and foresight with aggressive risk taking ability is what makes me unique.” Disclaimer: The pages slugged ‘Brand Connect’ are equivalent to advertisements and are not written and produced by Forbes India journalists.

Tweets by @forbesindia
Is mobile the future of photography?
Salon man of India