Christie's sold the skeleton of a Deinonychus antirrhopus — a species that became one of the world's most recognizable dinosaurs after the release of the movie "Jurassic Park" — for $12.4 million, with fees, to an undisclosed buyer 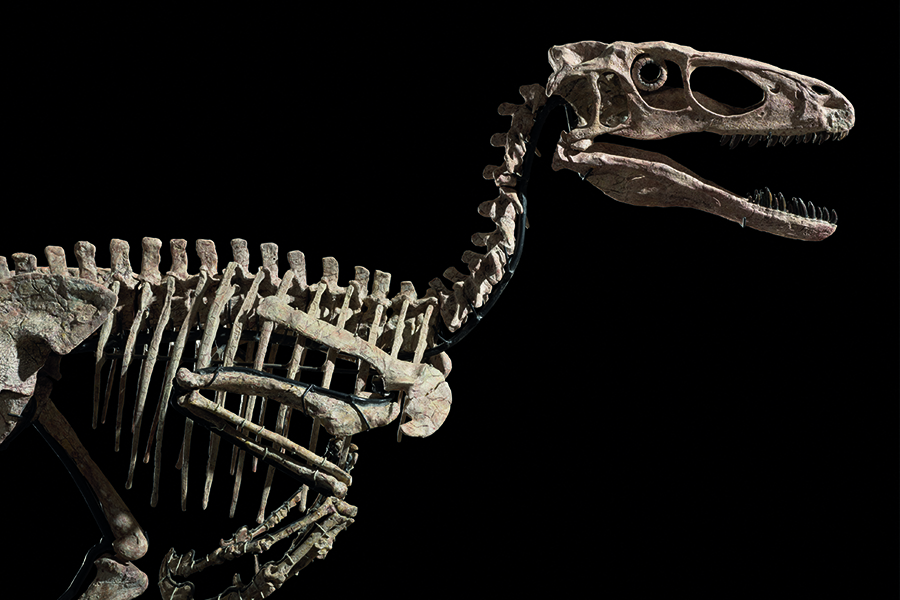 This handout image released by auction house Christie's shows "The Raptor", a Deinonychus skeleton which was excavated from Montana. "The Raptor", the skeleton of a Deinonychus antirrhopus, made of 126 fossilized bones and measuring more than 3 meters long, was sold for $12.4 million, including fees, to an Asian client, the auction house said after the sale, without further details; Image: AFP

It may not be a Matisse, or a Warhol, but this multimillion-dollar sale at Christie’s comes from the hand of a different kind of artist: Mother Nature.

Late Thursday, Christie’s sold the skeleton of a Deinonychus antirrhopus — a species that became one of the world’s most recognizable dinosaurs after the release of the movie “Jurassic Park” — for $12.4 million, with fees, to an undisclosed buyer. The auction continues the trend of high-priced fossil sales, a pattern that has irked some paleontologists, who fear that specimens could become lost to science if they are bought by private individuals rather than public institutions.

The auction house said the fossil, nicknamed Hector, was the first public sale of a Deinonychus, an agile, bipedal dinosaur known for the menacing claws on its feet. The sale price was more than double the auction house’s estimated high of $6 million.
The species most likely would not be getting so much attention if not for “Jurassic Park.” In the novel and 1993 movie, the beasts called velociraptors are actually more like a Deinonychus. (The novel’s author, Michael Crichton, once admitted that “velociraptor” just sounded more dramatic.)

This skeletal specimen contains 126 real bones, but the rest are reconstructed, including most of the skull, the auction house said. Dating back roughly 110 million years, to the early Cretaceous period, the specimen was excavated from private land in Montana about a decade ago by Jack and Roberta Owen, self-taught paleontologists, according to Jared Hudson, a commercial paleontologist who bought and prepared the specimen. It was later purchased by the most recent owner, who remains anonymous.

“I had no idea it would end up at Christie’s,” Jack Owen, 69, said this week. He said he was trained in archaeology and had worked as a ranch manager and fencing contractor.

Owen had struck a deal with the landowner on the ranch where he worked, allowing him to dig for fossils and split the profits, he said. He first spotted some of the bone fragments in an area where he had already found two other animals. Using a scalpel and a toothbrush, among other tools, he and Roberta, his wife, carefully collected the specimen, with some help.

To see it go for millions of dollars is stunning, he said — the profit he received wasn’t anywhere close. But Owen said his fossil hunting wasn’t driven by money.

“It’s about the hunt; it’s about the find,” he said. “You’re the only human being in the world who has touched that animal, and that’s priceless.”

The species’ fossils were discovered by the paleontologist John H. Ostrom in 1964, and he gave them the name Deinonychus, meaning terrible claw, after the sharply curved hunting claw he believed the dinosaur used to slash its prey. Ostrom’s discovery was foundational to the way scientists understand some dinosaurs today — less lizardlike and more birdlike; fast-moving and possibly warm-blooded, and even feathered.

Some paleontologists have long argued against the practice of auctioning off these fossils because they fear the specimens could end up being sold at prices that are out of the reach of museums.

The issue gained prominence with the sale of Sue, a T. rex skeleton, to the Field Museum for $8.36 million — nearly $15 million in today’s dollars — in 1997. And it has received renewed scrutiny more recently, after a T. rex skeleton nicknamed Stan brought in a record $31.8 million, nearly quadrupling its estimated high of $8 million.

Before Christie’s auctioned Stan off in 2020, the Society of Vertebrate Paleontology urged it to consider restricting the sale to “bidders from institutions committed to curating specimens for the public good and in perpetuity, or those bidding on behalf of such institutions.”

“As an organization, we made a decision that we felt vertebrate fossils belonged in museums,” said Jessica M. Theodor, the society’s president. “If it’s in private hands, that person dies, their estate sells the specimen and the information gets lost.”

Many commercial paleontologists — like Hudson, who bought Hector from the Owens — counter that their work is critical to science, too, and that they need to be paid for their work so they can keep doing it.

“If people like us weren’t on the ground,” Hudson said, “the dinosaurs would erode away and be completely cut off to science.”