Richard Branson is raising the price of a ticket to space

If you were hoping to buy a ticket to space on one of Richard Branson's Virgin Galactic space planes, you'll probably wish you bought one seven years ago, like 600 others who put down a $1,000 deposit 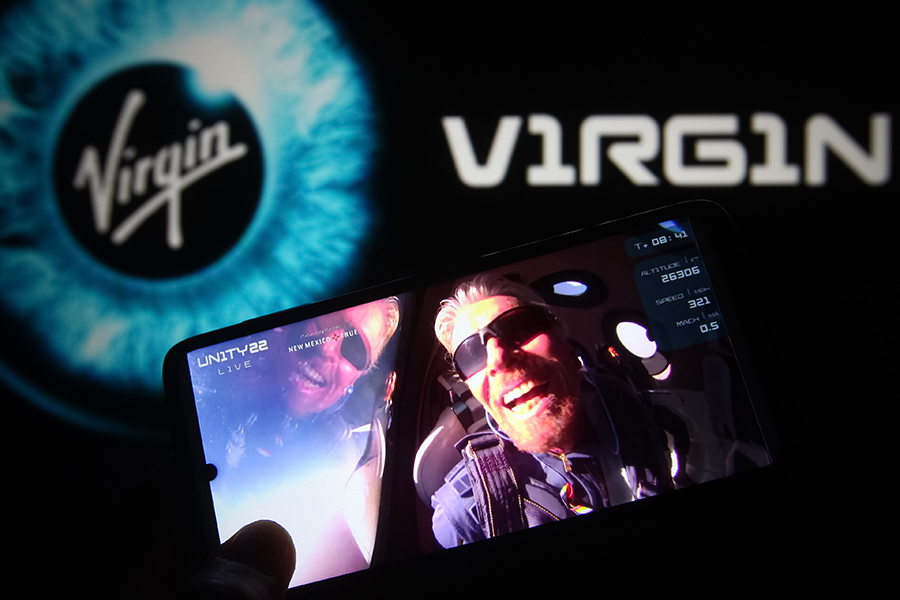 In this photo illustration, British billionaire Richard Branson is seen on a fragment of a Virgin Galactic Unity 22 Spaceflight Livestream Youtube video displayed on a smartphone with the Virgin Galactic logo in the background. UK billionaire Richard Branson on July 11 soared more than 50 miles (which marks the boundary of space according to the United States ) aboard his Virgin Galactic VSS Unity space rocket plane and lands safely, reportedly by media; Photo Illustration by Pavlo Gonchar/SOPA Images/LightRocket via Getty Images

If you were hoping to buy a ticket to space on one of Richard Branson’s Virgin Galactic space planes, you’ll probably wish you bought one seven years ago.On Thursday, Virgin Galactic announced that it was resuming sales of tickets on its flights, which rise above 50 miles and offer about four minutes of free fall and a view of Earth against the darkness of space.The price: at least $450,000 per seat.That’s some $200,000 more than what the company was charging in 2014 before it suspended sales after the crash of its first space plane, VSS Enterprise, during a test flight. About 600 people have tickets from the earlier round of sales.And if you haven’t already put down a $1,000 refundable deposit, you’ll have to wait even longer. Virgin Galactic will first make tickets available to the 1,000 people who were able to reserve a spot on the waiting list for when ticket sales resumed.Michael Colglazier, Virgin Galactic’s chief executive, acknowledged during a call with industry analysts as the company announced its quarterly earnings that the higher price would lead to higher revenues and please shareholders. But, he said, the trip to space still “delivers such great value, that the people who experience this journey with us can’t help but recommend it.”While the earlier customers’ tickets are relative bargains now, they have been waiting for years longer than they had anticipated. Through the years, Branson had repeatedly said he expected commercial flights would begin shortly.Branson founded Virgin Galactic in 2004, and he originally expected commercial flights to begin by 2008. But development of the rocket plane proved much more difficult and slow than planned. Branson finally got his flight in July as one of six people during a test flight.The next flight is scheduled for late September. It is still a test flight, but it will carry paying customers — the Italian air force bought the flight for two of its researchers to conduct experiments.Virgin Galactic will then pause operations for upgrades to the space plane, named VSS Unity, and to the carrier airplane that takes it off the ground to an altitude of about 45,000 feet before releasing it for its short flight to space.In the middle of 2022, Virgin Galactic plans one more test flight to verify the upgrades and then begin commercial operations, Colglazier said. From there, Virgin Galactic hopes to increase the pace of flights with additional space planes coming into service.Even at the sky high price, Colglazier said he expected repeat customers. “We believe this experience is so unique and compelling that it will drive multiple repeat experiences with friends and family across multiple spaceports around the world,” he said.Blue Origin, the rocket company founded by Jeff Bezos and the competitor to Virgin Galactic in the suborbital space tourism market, recently began selling tickets on its New Shepard spacecraft, which launches like a rocket instead of a plane and goes a bit higher, to more than 62 miles. For its first flight, which carried Bezos, Blue Origin auctioned one seat, for $28 million, which went to Bezos’ space-focused charity, Club for the Future.Blue Origin started selling seats to people who participated in the auction, but it has not disclosed its current ticket price or how many people have bought tickets.