Body shop or chop shop? The Indian presence in the US job market is under the spotlight again 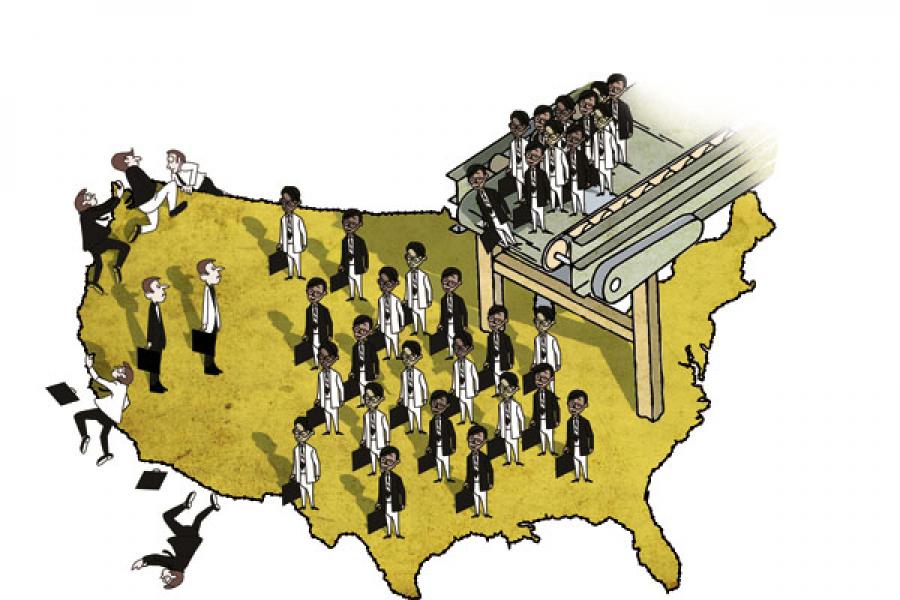 The Storm
“The emergency border funds will be paid for by assessing fees on foreign companies known as chop shops that outsource good, high-paying American technology jobs to lower wage, temporary immigrant workers from other countries. But it will not affect the high-tech compawnies such as Intel or Microsoft that play by the rules and recruit workers in America.” - Senator Charles Schumer (He later said he meant body shops). This statement provoked angry reactions from Indian technology firms, industry and media. He seemed to hint that Indian companies were to be blamed for America’s woes. Above all, ‘chop shops’ conjures up images of cyber coolies working in sweatshops, robbing jobs from Americans. Reality, as always, is far more complicated.

US Vs Them
Companies grow by looking for the most relevant markets and resources. Microsoft and Intel — all those who play by the rules and recruit workers in America also have large operations outside the US, and India has some of their biggest centres. As they grow, Indian IT companies’ global development centres also mostly recruit locals.

What’s Out There
Most of the processes that get outsourced, and off-shored are the ones that can be standardised. But as companies get more comfortable about outsourcing, the old description of cyber-coolies can no longer be applied across the board. High-end work takes place at these centres and has helped in reversing brain drain.

Real Picture
Implicit in many of the comments made against the Indian IT sector is the idea that these companies are sweatshops where low cost labourers are exploited. Yet, a company job is among the most sought after in the country — for both the pay and work environment. “What I would like to do is to invite Senator Schumer and his team to visit India and look at the excellent work that’s being done in the
software development centres here,” says Som Mittal, president of Nasscom, an industry body.

Unfair Criticism
Indian IT companies are unfairly targeted says, Som Mittal, president of Nasscom. “The top 10 Indian companies applied for less than 5,000 visas last year. On the other hand, Indian IT companies have only helped the US economy — through innovation and productivity. They are increasingly hiring locals in the development centres abroad. Indian IT sector is not a part of their problem, it’s a part of the solution,” he said.

Visa Power
Last year, two senators, Richard J. Durbin and Charles E. Grassley introduced a visa reform bill, saying “some companies that discriminate against American workers are so brazen that their job advertisements say “H1B visa holders only.” But, Nasscom’s Mittal pointed to an investigation by US Immigration which found that only a few companies have misused H1B visas.

Flip Flop
Ross Perot is best known for founding EDS and Perot Systems, both of which have large operations in India. As a businessman, he is a go-getter. Yet, as a politician he will probably be remembered most for his comment: “NAFTA will cause a giant sucking sound as jobs go south”. He was referring to the North American Free Trade Agreement. Some see Schumer’s statement as a reflection of the economic conditions in the US, where unemployment has touched half a million people, the highest in nine months.

Tweets by @forbesindia
Crest Animation: In Search Of The Happily Ever After
Grateful Dead's Business Rhythm