The Agarwals of Bikaner, descendants of Haldiram Bhujiawala, are packaging their local flavour for a national and global market 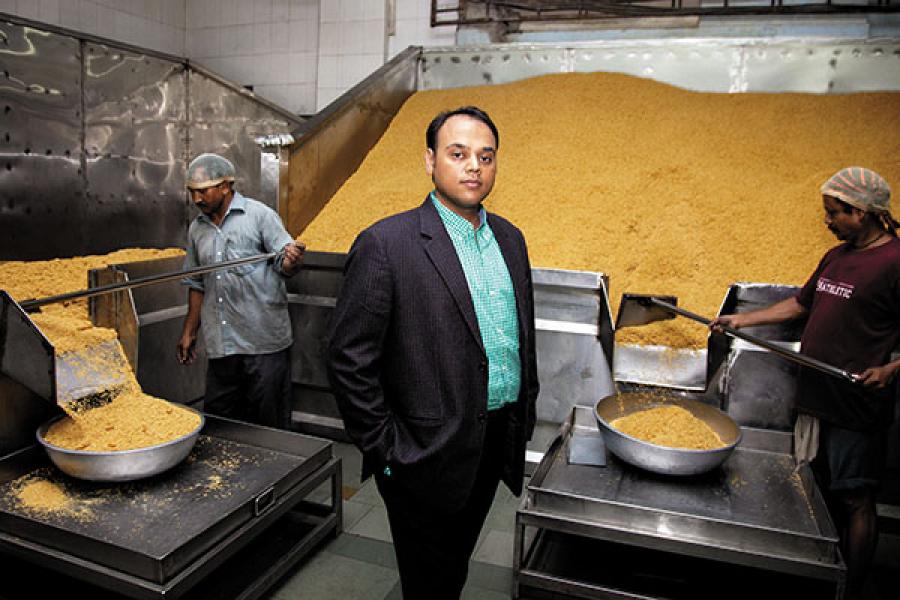 Image: Prasad Gori for Forbes India
Deepak Agarwal has set his sights on the global market

Hindi poet Ashok Vajpeyi had once remarked that one half of Bikaner’s population is occupied with making bhujia and the other with eating it. His observation continues to hold true in the dusty, desert city where every third shop in the bazaars sells namkeen (savouries) and sweets. While staple indulgences kachoris and samosas are consumed with abandon, one particular snack is a must with every meal: Bikaneri bhujia.

The nationwide ubiquity of this crunchy mouth-pleaser today belies the fact that around 20 years ago, few outside Rajasthan were aware of it. Bhujia, made from ‘moth’ dal, a locally grown legume that provides the distinctive flavour, was often confused with sev (thinner strands made of chana dal). That problem no longer exists. The real McCoy is now easily recognisable, after the Bikaneri bhujia was accorded a geographic indication, acknowledging the unique taste of ingredients sourced from the region. And Bikaji Foods International, founded in 1987 by Shivratan Agarwal, has played a stellar role in this process.

Agarwal—known as Fanna babu— produces, daily, around 125 tonnes of savouries (bhujia, namkeen, papad among others) and sweets in his two factories. His brand Bikaji has become an established player in the packaged foods business, generating a revenue of Rs 400 crore (FY2014) with a presence in 20 states through its distributors. The snacks, earlier unbranded commodities produced by the local halwai, are now retailed in a range of pack sizes and consumed in India and abroad.

The Men Behind it
Shivratan Agarwal is the grandson of the legendary Gangabhisan ‘Haldiram’ Bhujiawala, who started his business from a small shop in Bikaner in the 1930s. Over the years, his descendants spread out to other metros to establish themselves. After a pitched battle in the 1990s, they marked their turf within India and overseas. But Agarwal knew that division by region would become a barrier to growth. He decided to branch into a new brand, ‘Bikaji’, named after Raja Bika who had founded Bikaner.

At Rs 400 crore, his company is only a tenth of the size of Haldiram’s—his brothers who run the brand out of Nagpur and Delhi respectively have a combined turnover of about Rs 4,500 crore. But Agarwal has been able to mesh Bikaji into the city where it originated, separating it from the clutter in the marketplace. And he can sell products under this brand anywhere in the world, even as the battle for ownership and rights to Haldiram’s is being fought in the courts.

In 2004, Agarwal’s only son Deepak expanded the business to include fast food and a dozen other products. Apart from increasing sales, introducing new packaging and sub-brands, he has also begun exporting frozen foods to international markets.

Traditionally, Bikaji catered to Rajasthan, Assam and Bihar where namkeen has many takers. But Deepak, 33, is trying to lure in new customers with extruded products, chips and newer varieties of sweets. He has got a positive response from the US and Canada markets for frozen rabdi, rasmalai and motichur ladoos. He is also experimenting with selling restaurant packs, including samosas and other pre-cooked Indian savouries, to hotels in North America. “Our first target is the Indian diaspora, but we have to slowly introduce our food to western palates. Just look at how ‘butter chicken’ has caught on in the UK… it is simply a matter of familiarising them. The sky is the limit,’’ says Agarwal. 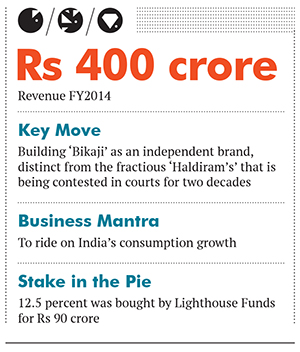 Why It Is A Gem
Bikaji is on the cusp of growth, having invested Rs 150 crore in a new factory which is four times larger than the existing premises. Production from the new facility, with automated lines with faster, more hygienic production, will start next year. Construction has also begun on a new plant for frozen and instant foods.

In April 2014, PE firm Lighthouse Funds, which has been investing in consumer-focussed companies in India, picked up 12.5 percent (for Rs 90 crore, valuing the company at Rs 750 crore) in Bikaji Foods. Sachin Bhartiya, a partner at Lighthouse, says the demand for branded snack-foods can only increase in India. “Few Indian companies have the strong brand and distribution reach that Bikaji has. The company is selling more than it can produce,” he says.

Why It Was Hidden
For long, Bikaji Foods was trying to make the leap from a small, proprietor-driven business to a larger, more professionally-driven organisation. It has been taking inspiration from the Rajkot-based Balaji Wafers which has been giving established multinational brands serious competition. “Balaji has created a revolution in the market which is hugely inspiring,” says Deepak.

Ravi Chaturvedi, former president of P&G north Asia, is among those advising Bikaji on its growth and branding strategy. Chaturvedi, whose forte is customer-insight and strategy, is on the Lighthouse advisory council. “He felt we should continue our focus on traditional Indian foods, which is our USP compared to the MNCs,’’ says Deepak Agarwal. “Lighthouse cannot tell us how to make rasgullas. But they can help us develop our systems to move to the next level.”

Risks and challenges
Bhartiya expects Bikaji to grow at 25 percent annually. As the company expands within India and abroad, hiring the right people will be critical. Especially since the transition from a semi-organised market to the highly quality-conscious export market will demand a different mindset. And Bikaji, the Agarwals say, is prepared.

Tweets by @forbesindia
A Peek Into US' Most Expensive Home Sales
GlobalLogic: Outsourcing Champions