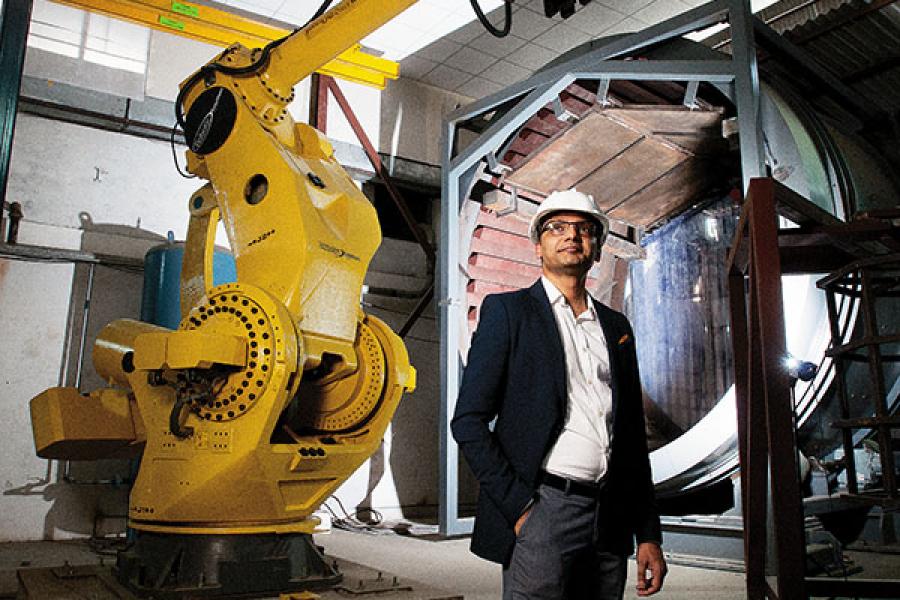 A family-run foundry in Lucknow, which moulds metal into the form its clients specify, has ridden the highs of an insulated economy, weathered the storms of post-liberalised India, and emerged unscathed to cater to international engineering firms. During this process of upheaval, founder Sateesh Agarwal adopted different manufacturing strategies and introduced new technologies to battle tough market conditions and stand apart from rivals.

PTC Industries creates casts and specialised products from stainless steel and high-alloys melted into moulds, and has been doing so for 51 years. The business went through tough times in the late 1990s when China became the main international manufacturing hub for foundries. Then, in 1998, Sateesh and his son Sachin, now 42, read about a new moulding and casting technology in a foundry magazine. The technology had been developed by Castings Technology International (CTI), a UK-based non-profit trade and research organisation, which thought it was a gamechanger. The father and son travelled to Sheffield to meet CTI’s engineers.

CTI was initially hesitant to sell its technology to an Indian firm it knew little about. “It took a year for them to agree,” says Sachin, who now heads daily operations at PTC.

To tackle the threat from China, PTC paid for, and later innovated on, the CTI proprietary technology called Replicast, which is used to manufacture complex precision stainless steel castings required by power, aerospace and oil exploration companies, among others. It was a crucial moment, one that not only changed PTC’s fortune but also helped it acquire a unique identity. Today, PTC Industries’ net worth stands at Rs. 109.06 crore, according to the promoters, with revenues of Rs 122 crore for FY2014.

The men behind it
Sateesh, now an octogenarian, was an engineer from BIT Sindri in Jharkhand. When he was employed at Texmaco, an engineering and infrastructure firm in Kolkata, a Russian colleague suggested that he get into investment casting, one of the oldest metal-forming techniques. In 1963, he founded Precision Tools and Castings, later renamed PTC.

But it was only in the ’80s, when the company started attracting international clients, that PTC became a name to reckon with. A decade later, the ‘Chinese threat’ emerged. By then, Sachin had returned from the US, armed with a master’s degree in finance from Boston College and an MBA from the University of Tulsa in Oklahoma. When he joined his father’s company, he brought on board his keen interest in IT. He computerised the business, and helped negotiate the CTI deal.

In 2010, the Agarwals customised processes by using less material. It reduced production cost. Two years later, PTC caught the eye of Delhi-based Pragati Equity Advisors. “We came across PTC, which seemed to do a lot of the things we wanted—reduce resource use and upend the cost dynamics of the industry,” says Narayanan Shadagopan, MD of Pragati. In 2012, the PE firm invested Rs 16 crore for an 8 percent stake in the company. This will increase to a 20 percent stake on a total investment of Rs 40 crore by the end of 2014. 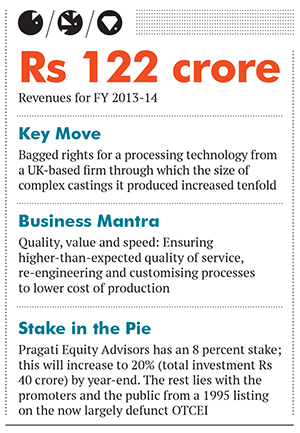 Why it is a gem
PTC’s client list reads like the who’s-who of the business world: Rolls-Royce, Metso, Flowserve, Emerson Electric and Siemens AG. For instance, it makes the castings for Rolls-Royce that go into building water jet engines. Not bad for a family-run company that set up business at a time when Indian foundries had no standing in the US and Europe.

The company’s production for the year to March 2014 was around 1,800 tonnes from three plants. It is a very small percentage of the castings produced in India. But it is the end-use of these products that sets the company apart. It is the only foundry in India to base its business on Replicast and successor technologies.

In recent years, the company, in association with CTI, is using a new technology called ‘RapidCast’, which promises to revolutionise the industry by breaking weight barriers. PTC is the only company in the world that produces 2,500 kg single-piece casts using ceramic moulding.

The company is expected to show a 10 percent jump in sales and profit for FY2015. To keep up with the demand, it is building a Rs 100-crore plant in Lucknow (replacing the existing one), which will quadruple the annual capacity of its Lucknow unit. The factory will become operational in 2015-16.

Why it was hidden
For one, its location. Lucknow is not viewed as a thriving industrial centre. Its business-to-business model means that end users are unaware of its existence. The nature of the metal castings it moulds does not lend itself to displays in showrooms.

Risks and challenges
Expansion could pose its own risks. Investments in the new factory are large compared to its existing revenues. The company also faces foreign exchange risks and a stronger rupee could hurt its earnings as it exports 70-80 percent of its produce.

But Sachin’s decision to increase capacity may pay off in the long run. Macro-economic conditions are likely to improve, and oil exploration, nuclear power and mining industries will expand. With a history of innovation, PTC will be ready when demand increases.