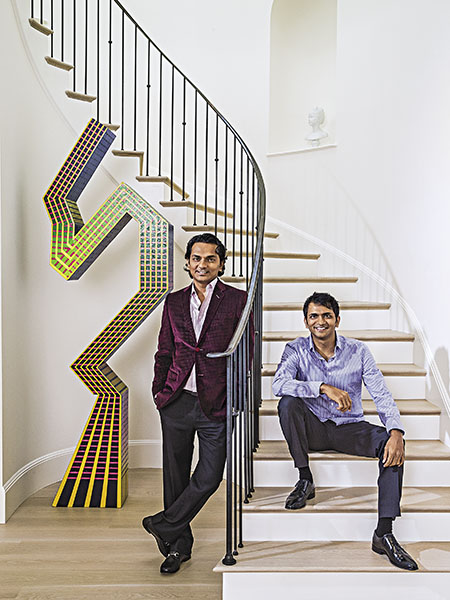 “We need to know that we are doing something that’s fun,” say Divyank (left) and Bhavin Turakhia
Image: Eric Millette for Forbes
Anyone can play a video­game. But can you create one? That was the challenge that motivated brothers Divyank and Bhavin Turakhia to begin game programming when they were still in primary school. The challenge came from their father, a chartered accountant, who also bought them books on how to create games.

At the age of 13, when Divyank had a computer project at school, he and Bhavin, who was 15, spent an entire year developing a business-simulation game. It starts with an animation sequence on how a commercial partner has cheated the player and taken over a company. So, with no money in hand, the player is charged with building a rival business from scratch. The ultimate aim is to gain 100 percent market share. The player must handle money and employees as well as create and manage budgets. “Playing the game was educational. Creating it was an experience,” says Divyank.

Now, 21 years later, the brothers are winning for real. Divyank, referred to as Div, sold his six-year-old advertising technology firm Media.net to a consortium of Chinese ­investors in August for a whopping $900 million. The deal was negotiated by Bhavin in Beijing.

Combined with other exits and their personal investments, this gives the Turakhia brothers an estimated net worth of $1.3 billion, making the tech duo rare new entrants on the 2016 Forbes India Rich List. Over the years, the brothers have created an array of businesses, including web hosting and cloud infrastructure, voice and messaging services, and digital payments. They have offices in Dubai, New York, Zurich, Los Angeles and Beijing.

“We’ve never been the first at anything, and it makes no difference to us,” says Divyank, 34. “But show me an industry where there’s $1-billion-plus to be made and I’ll do a better job than everyone else. We need to know that we are doing something that’s fun and exciting and complex.”

The Dubai ad tech company, which had $232 million in revenues in the past year, draws 90 percent of its revenue from the US and about half from mobiles. Div will continue to be chief executive, spearheading its growth in Europe and China. Bhavin, meanwhile, will manage three startups—two out of India—that he’s kicked off in the last two years.

So how did the brothers get this big? It goes back to an enriched, albeit unusual, childhood. From the time the lanky boys started learning about computers in their fourth and sixth grades, they were hooked. They began reading computer books and using their computer lab at the select Arya Vidya Mandir school in Bandra, Mumbai, during lunch breaks and free time after school. Early pocket money for Div came from doing computer projects for rich kids.

The brothers started freelance consulting when they were just 14 and 16. In 1998, they founded a company, Directi, with one computer in an office space owned by their dad, who lent them $600. With 40 clients lined up, the teens paid him back in the first month. Says Div, “When we were kids, we thought we could achieve anything. We still do.”

They bothered with undergrad commerce degrees to satisfy their mother, they say, but quickly moved on to businesses in web services and payments. “I’d have been the AOL of India, but I didn’t have the money,” offers Div half-seriously.

Until 2005, they ran the businesses together but figured out they could double their reach individually. “Working with Div is a lot of fun,” says Bhavin. “We think similarly in so many aspects. He’s the most chilled-out guy I know. I can count on him personally and workwise. We have a crazy amount of trust in each other.”

That helped the pair see past a stumble after Div started a company, Skenzo, licencing an online ad technology. After initial success, it nosedived amid shifts in the sector. Div was undaunted.

By 2010, he launched Media.net, which allows publishers to automatically display relevant ads based on the content of their web pages. The ads were mostly sourced from Yahoo. From 2012, Media.net ran the Yahoo Bing Network’s contextual ads and agreed to never sell or licence its tech to Google. Div says Yahoo considered buying Media.net several times, but each time it fell through because the timing didn’t work out. (Yahoo refused to comment.)

Bhavin meanwhile focussed on a web-hosting business that, with other services, was sold to a US firm, Endurance International, for $160 million. “The brothers have a very good dynamic of divide and conquer when it comes to work,” explains Hari Ravichandran, Endurance’s CEO. “They have a deep connection with each other as business partners.”

But the biggest deal was yet to come. In late 2015, Div got a feeler about Media.net from a Nasdaq-listed firm. So he enlisted Bank of America Merrill Lynch in a global search that led to China, where there’s a huge push for investment in online advertising technology following 2015 guidelines from the State Council.

The Media.net deal was led by Beijing’s Miteno Communication Technology, a tech, media and telecom company listed on the GEM Board in Shenzhen. Bhavin came in to negotiate so Div could continue running Media.net without distraction. “The talks involved getting up and walking out multiple times,” the elder brother says. “But with seven offers on the table, there was no need to make a compromise. We weren’t dying to sell the company.”

Bhavin also brought himself up to speed on Chinese laws and technologies. “At one point, it was me against 18 lawyers and investment bankers on their side,” he says. Still, he extracted a $426 million upfront payment.

With Miteno there was a good meeting of minds and cultures. Chairman Zhiyong Zhang, a veteran of the Chinese sector, hosted dinners and took Bhavin on sightseeing trips to the Forbidden City and the Summer Palace. Zhang, for his part, is thrilled with the partnership. He’d researched hundreds of options before deciding on Media.net. “I liked the tech platform, the innovation and the entire management team,” he says. “They’ve worked on developing the business in a cost-effective and profitable way. I like the fact that they have very strong relationships with premium publisher brands.” Conversely, Zhang’s relationships with the top three Chinese telecom players is a plus for Media.net.

While Div was busy in ad tech, Bhavin was floating other startups. But the brothers’ itch is for technology. “They come from the hacker mindset. They enjoy it when they break codes and build products,” says Avinash Raghava, co-founder of a think tank that’s working to make India a hub for software products. “They are focussed on building world-class products. This is very different from today’s entrepreneurs who are very distracted by money and investors.”

In fact the brothers have only once sought external investors—and later bought back the stake. They have a loose sharing arrangement when it comes to money and ownership of businesses. (Directi, the original incorporation, was kept as a brand that links their various companies.) “In my mind and in Bhavin’s mind, we both own everything and we both have access to everything,” says Div. “When you own the beach, why would you be splitting the sand?”

“They’ve also built a really good culture within the company,” says Endurance’s Ravichandran. “The focus is on problem solving.”

The brothers can be workaholics. Ravichandran recalls how Bhavin had a mini-van in Mumbai fitted with a workstation and Wi-Fi so he could work on the go during his 20-minute commute. Divyank, however, is into aerobatic flying. He says he wants to fly jets next. On land there’s a cherry-red Ferrari 458 Spider waiting for him in San Francisco, where the brothers share a house—as they do in Vancouver, Mumbai and Dubai, which they both now call home for ease of connectivity.

Between work and periodic play, there’s been no occasion for starting families. “We are too busy building businesses,” declares Div.

Tweets by @forbesindia
Vacheron Constantin chief reveals the challenges that traditional watchmakers face
A little bird told us: How the billionaires fare on Twitter