A self-educated entrepreneur, brijmohan lall munjal repeatedly built businesses that went on to become world leaders in their respective segments 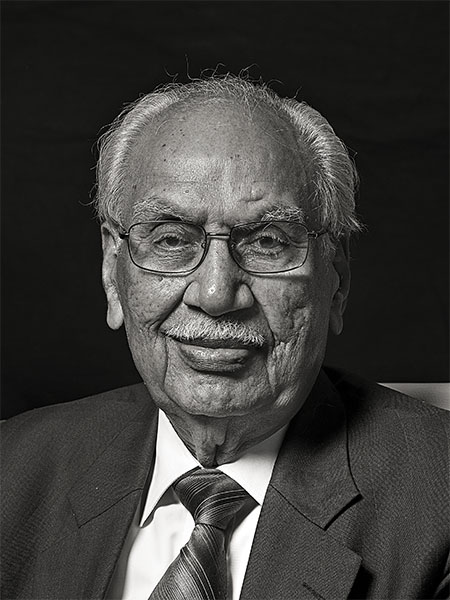 Brijmohan Lall Munjal was chairman emeritus of Hero MotoCorp when he passed away on November 1, 2015, at the age of 92. He was ranked 27 in the 2015 Forbes India Rich List
Image: Amit Verma

Considering that he believed in building close, long-term relationships—Brijmohan Lall Munjal knew every dealer and vendor by name—the break-up in 2011 of the joint venture between the Hero Group and Honda Motor Company was particularly emotional for him. The partnership—Hero Honda—that he had created and nurtured had lasted 26 long years and Hero Honda had become the largest two-wheeler manufacturer, not just in India, but globally (taken as a single entity).

When friction arose between the partners, for a multitude of reasons including transfer of technology and product development capabilities, Munjal, then 87, attended every meeting of the top management. He tried hard to find solutions that would allow the joint venture to continue. But “when he realised that things had come to such a pass that a separation was inevitable, he stopped being emotional and gave his nod,” recalls Ravi Sud, senior vice president & CFO, Hero MotoCorp. “He then told us to get the best people, go after the best technology and always look ahead.”

Munjal remained the guiding force for the top management for a few more years before handing over the chairmanship of the company to his son Pawan Munjal, 62, and stepping back to become chairman emeritus in mid-2015. He died on November 1, 2015, after a brief illness, at the age of 92.

“It was Munjal’s knowledge and wisdom that gave investors like me confidence that Hero MotoCorp will survive the break-up,” says Raamdeo Agrawal, co-founder and joint MD, Motilal Oswal Financial Services. Five years after the split with Honda, Hero MotoCorp has retained its dominance in the motorcycle segment and has since developed its technological and product development capabilities. “My team and I are taking his legacy forward with a commitment to sustained leadership…,” Pawan Munjal, who is now the chairman, managing director and CEO of Hero MotoCorp, had told Forbes India during an earlier interaction.

Born in 1923 in undivided Punjab, Brijmohan Lall Munjal and his family moved to India during the Partition. It was in Ludhiana that he, along with his four brothers, started a bicycle parts business, later foraying into bicycle manufacturing. Hero Cycles soon became a name to reckon with and Munjal, along with his brothers, helped create an entire cycle manufacturing ecosystem in Ludhiana. Today, Hero Cycles is the largest bicycle manufacturer in the world by volumes. He repeated the feat again with Hero Honda and then Hero MotoCorp. He believed that if one works hard and is good to the people around, success in business will inevitably follow. It consistently did. In the 2015 Forbes India Rich List he was ranked 27 with a net worth of $3 billion (his son Pawan Munjal has taken his place in the 2016 Forbes India Rich List and is ranked 29). He was also awarded the Forbes India Leadership Award for Lifetime Achievement in 2014.

Munjal swore by honesty and integrity. He never went to college but his adopted management practices endeared him to the entire ecosystem, be it employees, dealers or vendors, and remain legendary. “I was clearly instructed that at no cost should I hold back payment to vendors, whatever the company’s financial position,” says Sud. “There are times when we borrowed from the market just to pay vendors on time.”

His competitors, too, adored him. Bajaj Group Chairman Rahul Bajaj, for instance, called him his ‘guru’, and looked up to him for his wisdom and common sense. He was, indeed, a hero in every sense of the word.

(This story appears in the 10 November, 2016 issue of Forbes India. You can buy our tablet version from Magzter.com. To visit our Archives, click here.)

Tweets by @forbes_india
Tata writes to employees to allay concerns
A brief history of keeping time: The Rolex President watch