Rather than compete in shampoos and soaps, Marico has expanded to lines of soups, teas, flavoured oatmeal, grooming products. "If Parachute and Saffola are engine No 1, these new products are engine No 2 and engine No 3," says CEO Saugata Gupta 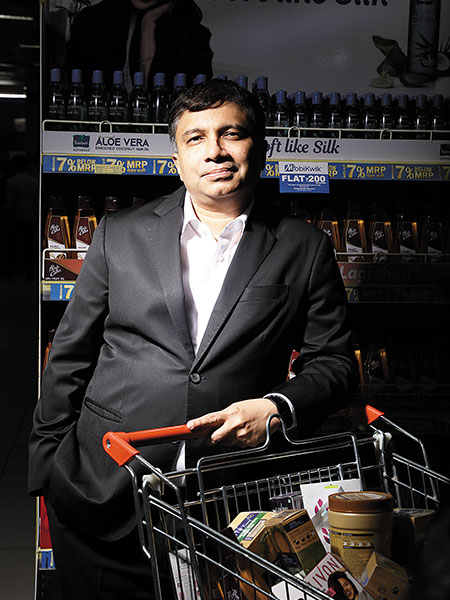 We are trying to disrupt ourselves: Saugata Gupta
Image: Mexy Xavier
Despite India’s faltering economic growth, CEO Gupta is unfazed. “We are trying to disrupt ourselves,” says Gupta, who took management control in 2014 from Mariwala. “What got us here is not going to take us to the next level.” To that end, the company is focussed on expanding into new products and markets, from high-protein meal soup in India to baby oil in Bangladesh and roll-on deodorant in Vietnam.

The strategy seems to be working: Analysts forecast sales growth of roughly 11 percent in Marico’s current fiscal year from ₹73 billion ($1 billion) last year, which was 16 percent higher than the year before. The company posted a record ₹9.3 billion net profit last year, a 14 percent increase year-on-year. Marico’s shares have risen 22 percent in past year, lifting the net worth of Mariwala by 16 percent to $4.6 billion, putting him to No 24 on our list from No 32 last year.

Gupta’s disruption of Marico is well-timed. Marico’s brands, especially its flagship Parachute coconut hair oil and Saffola cooking oil, dominate the domestic market, but face a growing challenge from deep-pocketed rivals such as Dabur (owned by India’s Burman family, No 13) in hair oil, Fortune cooking oil from a joint venture between Gautam Adani’s (No 2) company and Singapore tycoon Kuok Khoon Hong’s Wilmar International, and in food from iD Fresh Food, which is backed by tech billionaire Azim Premji (No 17). “I believe that if we don’t change in terms of products, the growth will be tougher,” says Gupta.

Rather than compete in highly competitive markets such as those for shampoos or soaps, therefore, Gupta targets new, niche products where Marico can create and dominate the market. In India, Marico has started developing new health foods, including a variety of ready-to-eat oatmeal with flavours tailored for local tastes such as Mumbai pav bhaji, and lemon and mint chutney. To distribute them, Marico installed vending machines in offices, hospitals and gyms across Mumbai, Pune and New Delhi.

Marico also recently launched its own line of soups, shakes, green teas and coffee products. It’s also rolled out male grooming products and a premium skin care lineup. While these new segments are just 6 percent of domestic turnover, Marico expects sales of these products to grow 20 percent a year for the next three to five years. “If Parachute and Saffola are engine No 1, these new products are engine No 2 and engine No 3,” says Gupta.

Marico is also expanding overseas, including in Bangladesh, Myanmar, Vietnam and the Middle East. International sales now make up more than a fifth of Marico’s global total. Parachute remains its biggest seller in Bangladesh, but it recently launched a line of baby oil and other infant products there. It has also made inroads into Vietnam with its X-Men brand of men’s shampoo and deodorant (no connection with the X-Men superheroes). To tap into India’s growing wellness trend, Marico last year paid an undisclosed sum for a roughly 23 percent stake in fitness and diet app Revofit, and says it plans to raise its stake to 37 percent this year.

As older executives may not know what younger customers want, Marico has turned to the millennials who make up 65 percent of its 2,273 employees. They are doing reverse mentoring, where younger employees teach the older ones subjects such as digital marketing. To be more hip, Marico has also adopted a smart casual dress code and replaced training seminars with online tutorials. “The millennial generation is very different,” says Mariwala. “They are socially responsible. They prefer natural to synthetic. They are sensitive to work-life balance.”

The company is now catering to trends such as the rising popularity of aloe for anti-ageing and charcoal for deep cleansing. Among its new products are Parachute Advanced Aloe Vera Enriched Coconut Hair Oil and the Set Wet Studio X Charcoal grooming range for men. Marico also launched the Set Wet Studio X last year as its first line available for online-only purchase, part of a wider effort to do more ecommerce. The disruption started by Gupta is far from finished.