Comstock, who headed business innovation at General Electric, speaks to Forbes India about her new book and why India has an edge in entrepreneurial innovation 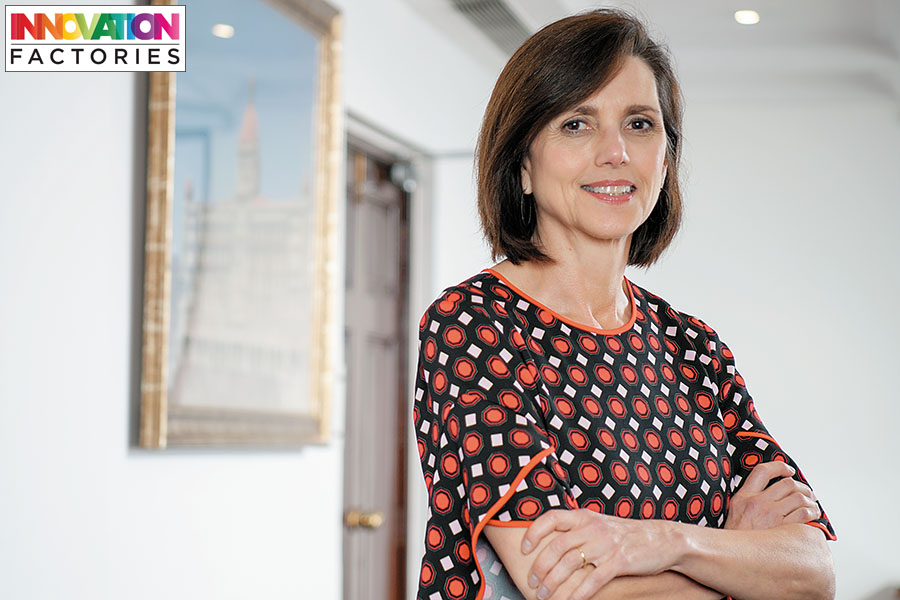 Beth Comstock, the first woman vice chair of General Electric
Image: Mexy Xavier
The most popular story about Beth Comstock is possibly the one about her turning down a job offer from Apple Co-founder Steve Jobs. Twice. She preferred content creation over technology development and did not want to uproot her daughters from their Connecticut home. However, the 58-year-old’s three decade-long career at General Electric (GE) saw her rise from a public relations role at the National Broadcasting Company (when it was owned by GE) to making history as the American conglomerate’s first woman vice chair.

In charge of business innovations, she led GE’s initiatives in clean energy, seeded new businesses and was part of its foray into the ‘digital industrial’, including the early development of streaming platform Hulu. She worked under two of GE’s long-running CEOs, Jack Welch and Jeffrey Immelt, and stepped down in late 2017. Since then, in her personal capacity as an innovation leader, she has trained many people—from the US Central Intelligence Agency to Australian officials—on how to stay ahead of the curve.

Comstock was in Mumbai in February to promote her first book Imagine It Forward, which is about creativity and innovation in the face of change. In an interview to Forbes India, she spoke about frugal and reverse innovation in India, why companies need to adapt faster, and why the digital age presents unique opportunities for women. Edited excerpts:

Q. Your book says “tension and conflict are the price of admission when you are innovating”. How have you managed the struggle that comes with innovation and what’s your advice to companies?
I don’t like conflict, but I came to recognise it is necessary. You need people who have a contrary point of view to challenge you and make your ideas better. While writing the book, I came to realise how much I like struggle. It is a combination of optimism and a realisation that you like to work hard on doing things. When I advise companies, they do what I call the ‘innovation theatre’. They dress up and pretend that they are innovating, but when it gets hard, they stop. I think real entrepreneurs know that they have to keep working through the messiness.

Q. When were you at your innovative best at GE?
The one project that I feel was most impactful was introducing clean tech through our initiative called Ecomagination [launched in 2005]. We fought to start clean tech investments at GE and launch products much earlier than most [other players] in the industry. Products that worked and made a difference. [Ecomagination is said to have generated more than $160 billion in revenue.] I was also able to work with good teams. There is nothing like being with a group of people who quarrel, fight, and just the next day, share ideas and laugh. I feel most proud of this ability to come together as teams to achieve things that we could not have done individually.

Q. Are there guidelines companies can follow to innovate, irrespective of size or resources? Especially in India, where frugal innovation thrives.
Employees must feel that they are allowed to try new things and take calculated risks. Empowering the work culture to try new things is critical, whether you are big or small. You have to create spaces where people allow conflict, to test them and shape their learnings.

In India, with the notion of ‘jugaad’ innovation, I found that more constraints stir more creativity. People often do not need as much money, as many people or as much time [to innovate]. I often recommend to bigger companies, “Don’t spend as much money in the early days. Spend it when you feel confident.” So I might urge more people to start with the ‘jugaad’ approach and then fund things that come out of that.

Q. Is the lack of innovation-friendly infrastructure the reason why India hasn’t had its own Facebook or Google, or hasn’t matched up with China?
More infrastructure always helps, but I see much more entrepreneurship happening and being funded out of India, exactly along the lines of what China did. They allowed a lot of seeds to be planted and provided support for the ones that were working.

You could argue that over time, Silicon Valley has gotten too insular… that it didn’t open itself up enough to new ideas. China has really invested in talent, but the question is whether it will be able to go global with that. India seems to be in an interesting place, as it is both able to represent the best of talent and figure out how to make it work both in the domestic market and elsewhere in the world.

Q. Since 2011, GE has encouraged reverse innovation. What is the future of this trend?
Reverse innovation was a hard sell at GE. When everyone wanted to capture the global market, we showed up in India, where, in health care for example, the doctors said our products were too expensive, they were not tailored to the needs of a small-row hospitals, etc… you cannot be No 1 unless you address those [grassroot] problems and solve local needs. Every company needs to be in touch with the market, live in the market. GE started a vibrant health care business ground up in India, and was then able to go to other markets that were not like India at all, where they adapted the product they developed. This creates an advantage in a new market, and it also gives you a product to take to an established market.

Q. GE is seeing layoffs and a giant debt load. Must it transition from being an asset-heavy company, enter new businesses to stay relevant?
GE has had a challenging couple of years, with a lot of complexity. The company is getting into exciting new industries like 3D printing in metal. Then there is clean energy, life sciences and health care. One takeaway from the GE story is that immortality is not guaranteed. I bet on it being around in the future, but they have to be fast, have to simplify faster. That said, I would not count the company out.

Q. So is this a case for GE to break up?
I think GE’s strength is in things like aviation and energy [which have a long gestation period]. The company has a competitive advantage and lots of intellectual property [in these sectors].
GE had a financial services business that brought with it a lot of debt that has to be cleaned up. GE’s size and complexity challenged it, but you cannot question its ability to innovate. It has a lot of things it needs to do to get simpler.

Q. Your book says the digital age will present unique opportunities for women. Please elaborate.
Even as the digital age brings in a lot of new jobs, the physical world is not going away. We still need to interact with humans, gather as people. There is need for human touch in services like health care and farming. Craftsmanship is going to be more valuable in the age of machines. I think women are good at collaborating and solving these problems… they are good at services that require empathy. So the trend points to women being able to create additional value-added services in a world that is going to be looking for them.

I work with many women entrepreneurs and they are thoughtful in how they take risks. They don’t necessarily get a lot of funding, so they are having to be much more innovative with fewer resources. So it can be argued that from an innovation perspective, women entrepreneurs have been tested in different ways. Especially in male-dominated fields, we will be recognised as different and scrutinised more. We must recognise the strength of our difference and lead with that.

Q. You describe yourself as an introvert. What did it take to navigate a high-powered job in the male-dominated corporate world?
Being an introvert, I have held myself back a lot. When I was new to the job, especially, I didn’t speak up, come up with more ideas or challenge my colleagues enough, even if it was my field of expertise. I worked really hard to not let that hold me back. I used my natural curiosity to speak with at least one new person, be it a colleague or someone in the industry, every day. Then there are good things about being an introvert, like it makes me a good listener and observer, helps me conserve energy. So I just learn how to strike the right balance.