Planning For a Balancing Act

We’ve always done it this way.”

Two of the biggest impediments to enterprise resource planning (ERP) – an initiative to integrate information and information systems across units of a firm and between the firm and its business partners – come in the form of those maxims.

“History and success – two enemies of change,” said Albert Segars, a strategy and entrepreneurship professor. He studies large-scale organizational change projects, and he knows why some companies succeed with ERP projects and others don’t. 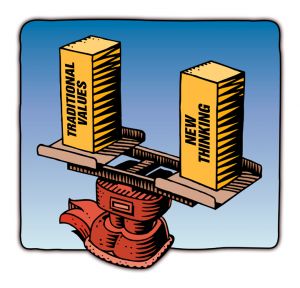 Results of his research with Debabroto Chatterjee of the University of Georgia surprised him: Large, established successful companies had a harder time with ERP than younger companies with more potential than profit. And challenges with these changes were systemic and followed a predictable path.

An ERP project usually refers to software that integrates all of a company’s activities on a single computer network. The idea is to eliminate duplicate processes that cost the company money through their inefficiency. For example, installing a plug-n-play application that lets each department tap into one vendor’s online ordering system is more efficient than building and maintaining a different procurement system for each department.

Plotted on a graph, the return on investment of a successful ERP should describe a curve that looks like the Nike “swoosh.” Initially, after building and installing a new system, the cost savings are low compared to the dollars spent. But as workers become more adept at the new technology and new way of doing things, the efficiency kicks in, and productivity and cost savings rise quickly.

But in many successful, established companies, the curve looks like a “W”: an expected initial steep decline in productivity, followed by an increase in productivity and savings. Then the curve plummets as divisions customize the system to return to the way they used to do things. To see the gain in efficiency again, leaders must convince division heads to resume working together for the betterment of the company, not their individual departments.

“Through our research, managers are able to describe, using financial metrics, exactly where they are along that W,” Segars said. “If I could tell you, before you spent the first dollar, what a good project looked like, you could set forth some managerial strategy to get the swoosh, not the W.”

Segars and Chatterjee do just that in their paper “Navigating for Success in ERP Driven Organizational Transformation,” which The Wall Street Journal/MIT Sloan Management Review featured. They studied 50 large-scale ERP projects over 10 years. They tracked the amount of money invested in the project and the productivity gained. Over and over, Segars saw the W curve. After recovering from the initial expense, companies descended into a trough as separate divisions customized the new system to their own databases. “Things get out of control on that third leg and become counterproductive,” he said. “Companies spend money for no return.”

Computer systems and software eat up a large part of a company’s operating expenses. A change in that area is not undertaken capriciously and stems from a managerial leadership issue, which is a much deeper and more complex change problem than just installing a piece of software, Segars said. As such, executives must present the ERP as a change in the organizational way of doing things.

“Change the organization, and then apply the technology,” Segars said. “Don’t expect the technology to lead the change. That’s the job of company leaders.”

And don’t ignore the resistance that leads to the third leg of the W, Segars said.

“Everyone wants to be productive. Nothing is more frustrating for people than to not be able to do their job,” he said. Resistance might mean that some aspects of the new system might be less efficient than the old way of doing things. The best systems “should work the way you work, rather than cause you to work in a different way,” he said. Executives should look at what should be preserved from the old system and discarded from the new system.

“Maybe the resistance is innovation in disguise,” Segars said.

In most businesses, 20 percent of the processes drive 80 percent of the activities. Segars recommends that, rather than instituting wholesale change for the sake of change, companies unify shared processes across divisions while respecting what is unique about each department.

Recognize that bad processes benefit somebody. To distinguish between resistance to change that interferes with methods benefiting the firm as a whole and ways of doing business that benefit only one segment, look for paradoxical results and pay attention to incentives. For instance, a company that increased its marketing spending saw fewer sales. Executives looked at the way the sales force was compensated and realized that they were inadvertently giving sales reps incentives to not bring back data to the company about what was happening in the marketplace.

Factor in the costs of training, coding, testing and time when implementing new software Segars said. Those hidden costs contribute to the first slide down in the W.

Change is hard, and changing technology is expensive. But businesses are made better by rethinking their organization of processes and harnessing new technology to streamline the changes.

Albert H. Segars is the RBC Bank Distinguished Professor of Strategy and Entrepreneurship, chair of strategy and entrepreneurship, and faculty director of the Center for Sustainable Enterprise at UNC Kenan-Flagler.
al.segars@unc.edu

Tweets by @forbes_india
Microfinance Lenders: To Profit or Not To Profit
Celebrating India's Entrepreneurial Renaissance