I told them it was a new concept and that I could afford to lose Rs. 1.5 crore, says Cafe Coffee Day's V.G. Siddhartha 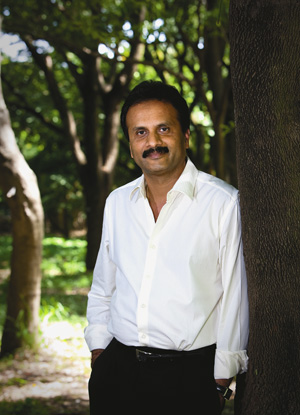 Name: V.G. Siddhartha
Profile: Chairman, Coffee Day Holdings
Age: 50
Why He Won For transforming a commodity business into one of India’s largest retail brands. And for broadening his business beyond retail to logistics, hospitality and financial markets.


I come from a coffee growing family. For 140 years, we have been growing coffee. Coffee is at a 30-year high today, but whenever the prices went down we were worried. As a grower, how do you change the cycle when the commodity prices don’t impact you so badly? That is how I came to retail.

International green coffee is today $20 billion. When I entered, it was only $7-8 billion. But even in those days, coffee retail was $100 billion market [coffee powder, instant coffee and cafés]. Today, it is touching $140 billion.

We first started with exporting coffee, because we didn’t want to go through a middleman. We started exports in 1993 and we became India’s largest exporter in just two years. So, I started thinking that if I can do it then a big international player could do it very easily. The barrier to entry is nothing.
I used to deal with big trade houses in Europe and the US and suddenly started realising that whenever the investment climate in India improves, they will come and put big factories next to ours and give a big threat to me in procurement. So I was forced to look for long-term survival. How do I keep my might in the coffee industry?

Then, we started thinking that we needed to build a brand. We started small with our Fresh and Ground outlets.

There was a young girl working with me and I had asked her to do some market research on the opportunity to set up stores to sell branded coffee powder. She studied the market for one week and asked me, “Are you sure you want to put up these shops? I met people who have been in this business for 20-30 years and everyone said this business is so tough you won’t be able to sell even 5 kg of branded coffee through retail outlets. Don’t waste your time and money.” It was scary for me to hear this; I had an internal target of doing 500 tonnes.

I was worried about entering an unknown market, and losing my money and reputation. My ego was going to be hurt if I failed. Those days, Coorg [from Tata Coffee] was very popular. They were doing 700-800 tonnes and I used to tell my agency that I want a brand name like that. I couldn’t call my brand Chikmagalur — I come from that area — but they convinced me that Coffee Day was a good brand. In 1994, we opened 20-25 stores in Bangalore and 20 stores in Chennai only selling coffee powder.

Today, we sell 6,500-7,000 tonnes of branded coffee in a year [through all Coffee Day brands, through vending machines, cafés and retail stores]. That was the beginning, but I realised that margins were limited in this business and that is the reason we went to cafés.

In 1995, globally, the café culture had picked up and I told my management team I wanted to put up cafés in India. It was a lifestyle business and a great way to build a brand. I told my team I wanted a nice concept store; I had a budget of Rs. 1.5 crore. They said it wouldn’t work. In India, people were selling coffee for Rs. 5 in 1995. I wanted to charge Rs. 25 for a cup. Who will buy coffee from you at that price? My team’s advice was not to do that business. I agreed.

About eight-nine months later, I was walking in Boat Quay in Singapore. They had 20-30 restaurants and at the end of the steps, facing the river, was a corner shop selling beer and Internet access and it was crowded. I came back to India and told my team I want to put an Internet café, we would sell coffee along with Internet access. We were going to do a Cyber Café.

They told me again not to do it. I told them it was a new concept and that I could afford to lose Rs. 1.5 crore. It was not going to bankrupt me. That’s how Café Coffee Day was born.  Today, we have grown to about 1,200 stores. In cafés in India, our nearest competitor is 170 stores. But I am not complacent about it.

In retail, location is very important. We spend a lot of time choosing these locations. We can’t afford to pay very high rentals. If our rent to revenue ratio goes above 20 percent, we will be in trouble. For example, it has taken us five years to get a place on Park Street, Kolkata. In a month, we analyse 250-300 locations and we select 25 of them.

We have an internal site location team of seven-eight people and I am personally involved in choosing these locations. I can tell you which part of Shimla is a good location, which part of Gangtok the store works. I travel to 45 stores in a month.

In the next 10 years, we have to be in the top four retail coffee brands in the world. Starbucks [including their kiosks] is at 17,000 outlets. Our internal target is to have 2,000 stores and 1,500 kiosks in the next three years in India.

The Starbucks culture grew because the US was prosperous and exported a lot of tourists. India will prosper in the next 20-30 years and send a lot of tourists abroad and we will go with them to every corner of the world. Today, we have 15 stores in Prague and we are learning from that. l
(As told to Mitu Jayashankar)

The one key quality in any great entrepreneur is the ability to visualise what the world could be like rather than what it is today. It is the ability to think in a non-linear fashion. Siddhartha certainly has that quality. In investor circles overseas, people are still surprised to hear about Café Coffee Day (CCD) — because India is perceived to be a tea-drinking country. He was able to visualise a national chain of cafes, where he could sell coffee at high prices. And he did that in 1995. I have been an early investor in Starbucks and Siddhartha was very taken by the idea.

He saw a possibility in being able to sell a cafe latte, for Rs. 50-100, which in those days was remarkable. Indians were very careful with money then and didn’t spend much on eating out. A cup of coffee made with Nescafe would have cost only Re 1 at that time. Today, someone sitting in Chandigarh, so far away from the coffee growing part of the country, drinks coffee in a CCD. That’s remarkable. They are at 1,200 stores today and all the other competing brands together don’t have even half of that number.

His investment in Sical [the logistics company], shows a similar vision. One day it will be bigger than CCD. He is visualising a future where logistics will be a very important part of this economy. Great entrepreneurs like Steve Jobs have been firstly great dreamers. The iPhone 4 — you can talk to your phone and it will do things. This is the stuff of my childhood comic books, and he made it real.

Siddhartha has been intrigued by stories of startups in Menlo Park, California, and Silicon Valley where we did a lot of our investment. He was also extremely curious and I believe that curiosity is one of the two most important qualities that an investor looks for in an entrepreneur and Siddhartha has a lot of that.

(This story appears in the 04 November, 2011 issue of Forbes India. You can buy our tablet version from Magzter.com. To visit our Archives, click here.)