Piyush Goyal: It's now a race between the manufacturing and services sector to reach $1 trillion exports in 10 years

Two days after India hit $400 billion in exports, India's commerce minister has set some ambitious targets for the next decade 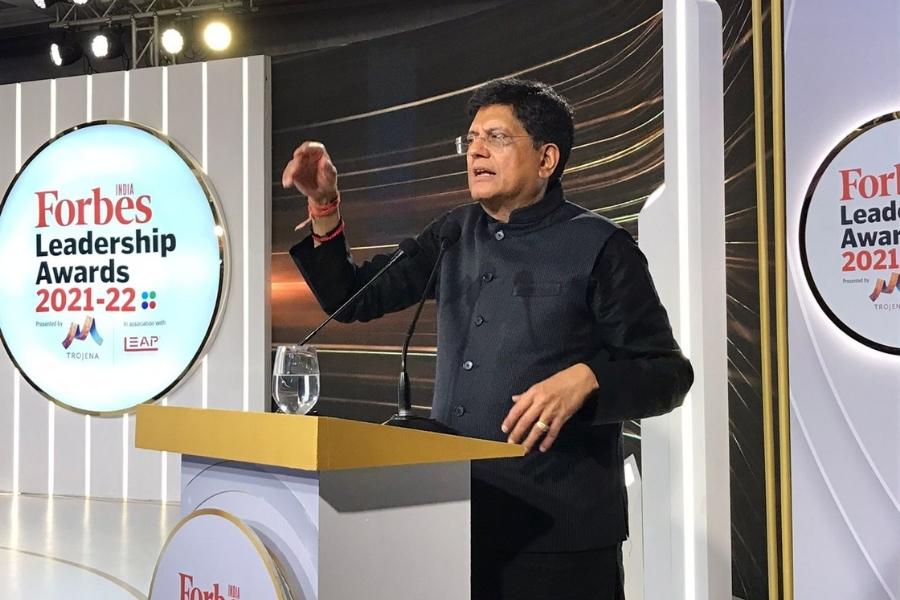 Piyush Goyal, India’s commerce minister, is in a rush. Even as India’s merchandise exports hit a record $400 billion for the first time, achieving the target nine days ahead of schedule, Goyal is now busy planning for the country’s manufacturing and services sector to clock in a record $1 trillion in exports in ten years.

“Now it's time for the service sector and manufacturing sector to race to the top and see who will cross the $1 trillion export mark first,” Piyush Goyal, India’s Minister of Commerce & Industry, Consumer Affairs & Food & Public Distribution and Textiles, said at the annual 2022 Forbes India Leadership Awards (FILA 2022) ceremony in Mumbai.

India’s $400 billion export figure, announced earlier this week, is significantly higher than the previous record of $330 billion achieved in 2018-19, and 41 percent higher than the previous financial year when India exported goods worth $291 billion. The services sector, the minister reckons, meanwhile, is already at $250 billion. “We'll soon have the numbers on service exports, and I promise you that's going to be very, very exciting,” Goyal told leaders of India Inc at FILA 2022. “I've already reset the target twice during the course of the year, and we are close to touching $250 billion in service exports.”

While Covid-19 has caused a blip in India’s fast-paced growth, largely due to the lack of investments from the private sector, the minister reckons that the massive boost to exports in the coming years has the potential to change everyday life of millions of Indians.

Meanwhile, the minister also said that the country’s economic situation has vastly improved compared to 2014 when the Narendra Modi government took charge. “Our foreign exchange reserves were at about $300-odd billion, so much so that the then government had to come up with a scheme to raise $34 billion just to protect the rupee from the free fall that it was witnessing," the 57-year-old said. “Our country did not generate enough enthusiasm amongst investors both in India and abroad to come and invest in India. The banking sector was in shambles with the kind of terrible credit risks that were taken indiscriminately in the 2008-2012 period,”

All that, Goyal says, seems to have changed now. And much of that is also thanks to the government's Atma Nirbhar India program, aimed at making the country self-reliant.

“We landed up having engagement with countries, which got access to our market, But we didn't have enough stakeholder consultations to be able to ensure that our offensive interests are protected,” Goyal added. “And that's the difference that we are trying to make, whether in our internal decisions as we promote India's Atnanirbhar program. It's not a program that's closing our doors to the world, it's actually opening them wider. We want to engage with the world from a position of strength with confidence. We should be recognised for the quality we offer to the world."

Tweets by @forbesindia
Is Mercedes-Benz S-Class the best car in the world?—Forbes India Momentum
Photo Of The Day: Fila2022 Celebrating Entrepreneurship