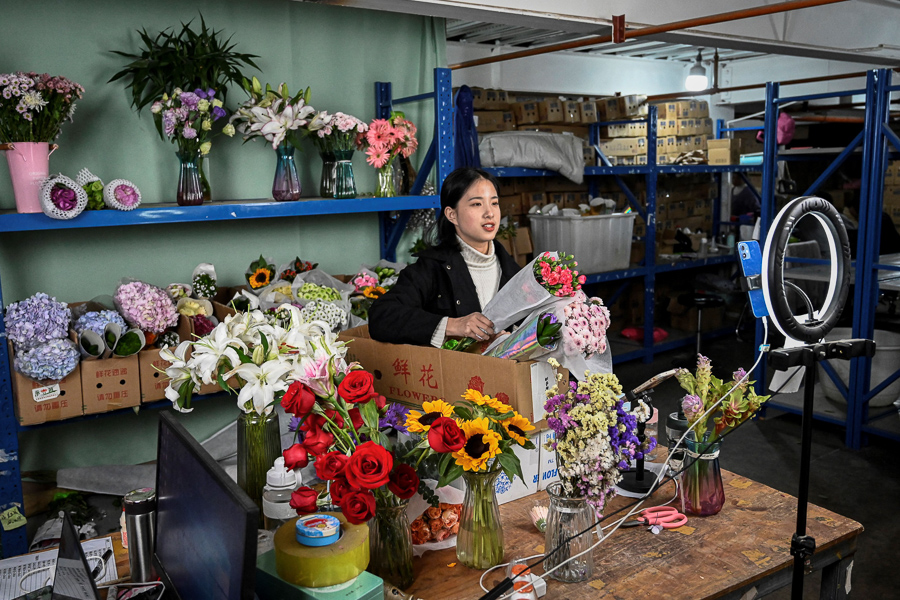 Boxes of roses, lilies and carnations pile up as influencer Caicai speaks into her smartphone from a small studio at Asia's biggest flower market—with thousands of customers eagerly awaiting her view on the best deals.

E-commerce is big business in China and influencers and livestreamers have made their fortunes showcasing products for luxury brands and cosmetics firms.

Now the nation's horticulture industry, worth an estimated 160 billion yuan ($25.1 billion), is getting in on the action. And where once people visited markets and florists themselves, they are increasingly shopping for blooms via their smartphones.

Online retail now represents more than half the sector's turnover.

"Five bouquets, only 39.8 yuan (6.25 dollars) for those that order right away," the 23-year-old says—a sales pitch she hones for eight hours a day delivered at lightning speed.

"When you sell something for a long time, the words come naturally," she tells AFP.

Earnings can be unreliable, however.

"Flower sales vary in busy and slack seasons, so a livestreamers' daily income is very variable. All I can say is that the more you work, the luckier you will be," she explains, as colleagues next to her put the bouquets in cardboard boxes ready to be shipped.

Demand for cut flowers has soared in China as standards of living have risen, with the southern province of Yunnan at the epicenter of that boom thanks to its all-year mild climate.

Provincial capital Kunming boasts the biggest flower market in Asia—the second biggest in the world after Aalsmeer in the Netherlands.

Everyday at 3 p.m., a rose auction starts in a huge room where over 600 buyers share the day's supply behind their screens.

"Yunnan represents around 80 percent of flower production in China and 70-80 percent of the flowers on sale pass through our auction room," says Zhang Tao, responsible for the market's logistics -- a crucial role when the goods are so perishable.

"That represents on average more than four million flowers sold every day. For Chinese Valentine's day, we sold 9.3 million in a day."

They are shipped across China within 48 hours.

On the retail side of the market, another influencer, Bi Xixi, showcases flowers and bouquets from stalls to sell on to her own online subscribers.

Wearing a traditional Chinese dress known as a hanfu, passing from one stand to another with her phone at the end of a cane, the 32-year-old has racked up around 60,000 subscribers.

She picks up flowers, shows them on her screen while followers hurry to place their orders.

Bi Xixi started livestreaming early last year, when China was paralysed by the Covid pandemic. That's when she realised people were eager to see online the flowers they could no longer buy outside.

She takes around ten percent commission and is optimistic about the future of the trade.

"People appreciate rituals more and more. Flowers give them a feeling of being happy and young people are beginning to like buying flowers," she says.

The market is still very far from saturation, says Qian Chongjun, head of the Dounan Flower Corporation, one of the largest entities on the market.

"Buying flowers every week has become a habit in many families," says Qian. "I think that one day they will become a vital need, like air and water".